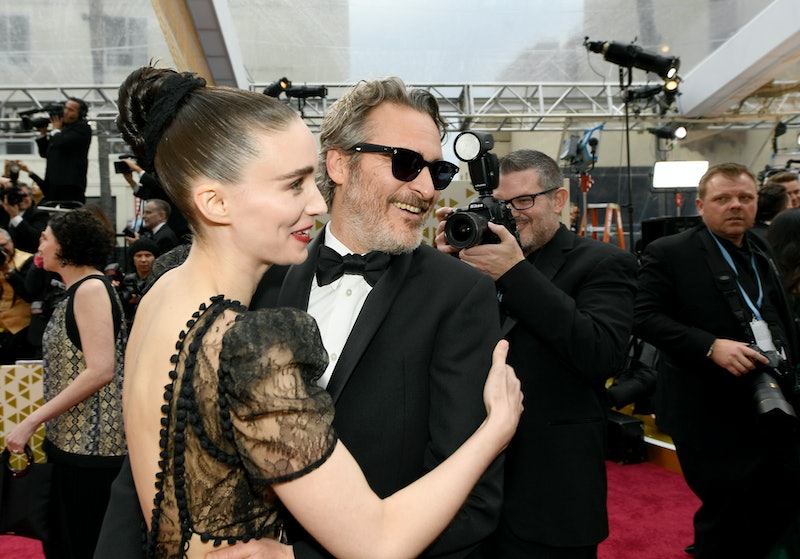 After keeping their relationship and pregnancy mostly under wraps, Joaquin Phoenix and Rooney Mara have reportedly welcomed their first child. And their baby's name is all but guaranteed to make you shed a tear. According to director Victor Kossakovsky, the couple recently welcomed a baby boy and continued a family legacy, naming their son River, after Phoenix's late brother, a prolific young actor who famously died in 1993 at the age of 23.

Kossakovsky, who worked with Phoenix on the documentary Gunda, spilled the beans on Sunday, Sept. 27, while speaking at the Zurich Film Festival. "He just got a baby by the way," Kossakovsky revealed, per People. “A beautiful son called River." The couple has yet to comment on the news publicly. Bustle reached out to representatives of Phoenix and Mara for comment, but did not receive an immediate response.

While fans know Phoenix from his Oscar-winning films like Joker and Walk the Line, his older brother River was the teen heartthrob du jour in the '80s, starting in television alongside his brothers before receiving critically acclaimed film roles in movies like Stand By Me and Running On Empty, for which he received an Oscar nomination. Phoenix has spoken a few times about the impact that River and his tragic death has left on him. "In virtually every movie that I made, there was a connection to River in some way," he said during a January interview on 60 Minutes. "I think that we’ve all felt his presence and guidance in our lives in numerous ways."

Mara's pregnancy was reported by outlets back in May, but the couple never officially confirmed the news publicly. "Rooney is about six months along,” a source told US Weekly at the time. “Joaquin is great and has been accompanying her to appointments.” The lack of confirmation comes as no surprise given how the couple has remained notoriously private throughout their relationship, save a few red carpet outings. "They mainly just like to be with each other as the two of them," the source said. "They’re in their own bubble."

Mara and Phoenix reportedly met on the set of their 2013 film Her, for which he was nominated for an Oscar, but they weren't linked romantically until January 2017, when they were spotted at a wellness center. The couple made their relationship public at the Cannes Film Festival later that year. Mara and Phoenix reportedly got engaged in May 2019, though they never outright confirmed the news.

However, Phoenix did gush about their relationship in a rare interview with Vanity Fair late last year, explaining that he thought Mara despised him while filming Her. "She’s the only girl I ever looked up on the internet,” he said. "We were just friends, email friends. I’d never done that. Never looked up a girl online."

More like this
Vanessa Hudgens Is Reportedly Engaged To Cole Tucker
By Jake Viswanath
'Friends' Star Maggie Wheeler Offers Support To Matthew Perry After Reading His Memoir
By Alyssa Lapid
Mel B Thinks These Celebs Should Play Them In A Spice Girls Movie
By Alyssa Lapid
'That '90s Show' Star Callie Haverda Got Advice From Mila Kunis & Ashton Kutcher
By Brad Witter
Get Even More From Bustle — Sign Up For The Newsletter
From hair trends to relationship advice, our daily newsletter has everything you need to sound like a person who’s on TikTok, even if you aren’t.