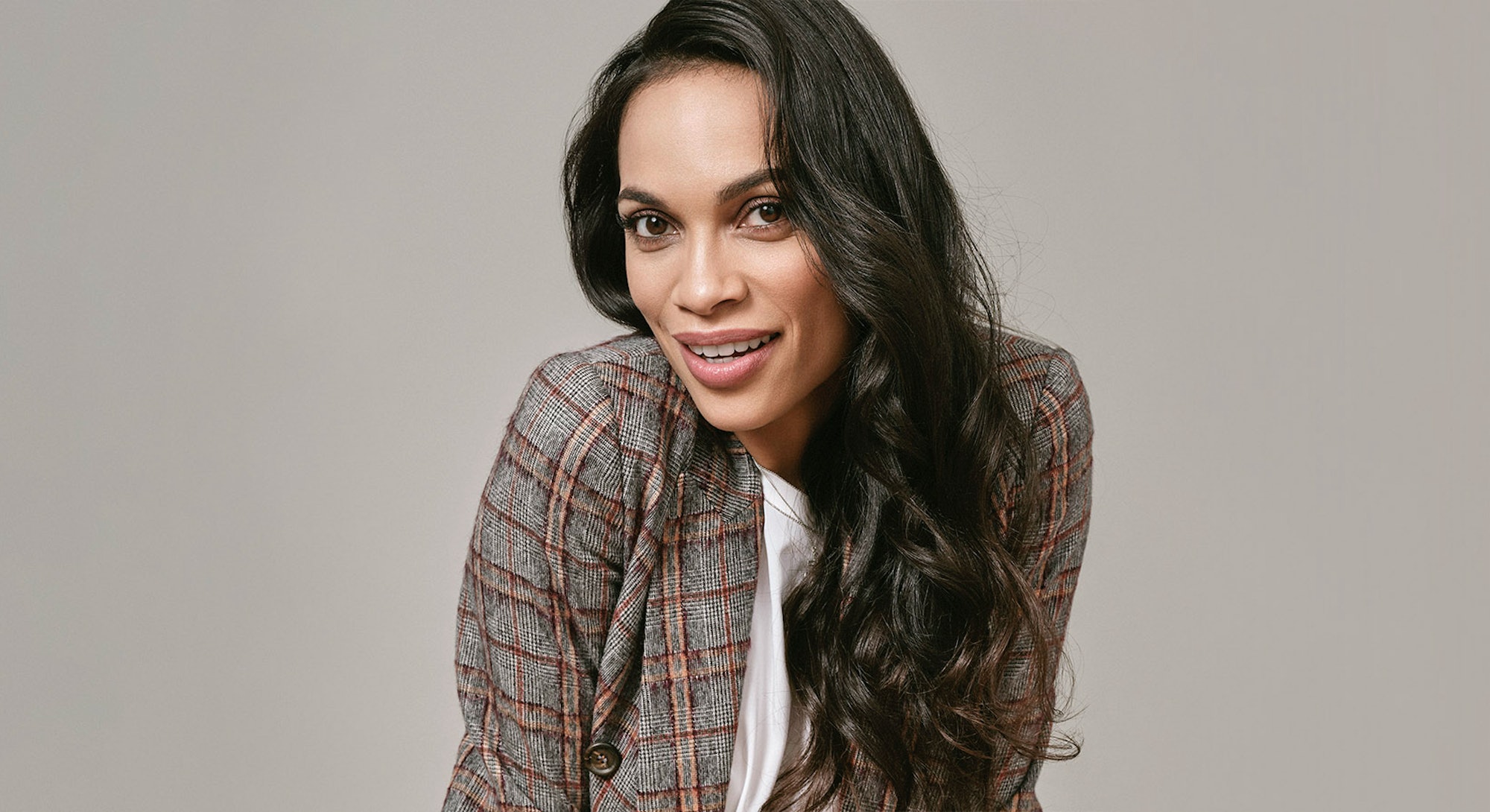 A simple compliment launches a mile-a-minute oration from Rosario Dawson. It’s a rainy February afternoon, and the 40-year-old actor looks statuesque in a plaid suit and blood orange heels. When I tell her she looks great, she opens up the jacket to look at the label. “This one is… Brunello… Cuci…” She might be unfamiliar with the pronunciation of Italian tailor Brunello Cucinelli, but Dawson’s well acquainted with his ethics, explaining that all her clothes for her press tour are from sustainable, vegan lines. It’s an approach she developed in childhood. “When you’re coming from a low-income background, you wore hand-me-downs and fixed things when broken, not immediately tossing them out,” she says.

A pivot from plaid suits to low-income economics is quintessential Dawson. She's here to talk about her role on Briarpatch, a pulpy neo-noir mystery that brings Dawson’s investigator character back to her Texas hometown to solve her sister’s murder. Since her 1995 debut in Larry Clark and Harmony Korine’s Kids, Dawson has appeared in more than 100 films and TV episodes, but this marks her first small-screen lead role. In Briarpatch, she found a project with a short contract (just one year, for 10 episodes) and multiple elements she delights in, including a modern, dreamlike take on a classic gumshoe storyline. As the unflappable Allegra Dill, whose armor of choice is also a great suit, Dawson isn’t allowed to sweat — “It was literally written in the script” — but she’s also given the swagger of a hard-boiled detective usually reserved for white men. (In fact, the Ross Thomas novel it was adapted from features a white male protagonist, but showrunner Andy Greenwald flipped the script for Dawson.)

Briarpatch is rich in Easter eggs for Dawson fans. The project reunited her with her Josie and the Pussycats co-star Alan Cumming, who once again plays a villain. Dawson bursts into laughter and starts clapping at the mention. “Nineteen years later, Alan is still being messed up by me! Why is that?” Dawson is thrilled to talk Josie — an important film that has found a cult millennial following since its 2001 release. “How ahead of its time was that movie?” she says of the feminist rock-and-roll masterpiece. “I recently just saw Seth Green and we were just laughing. We didn’t do any scenes together, but DuJour means family.” She pauses and reiterates: “DuJour means family.”

The second egg is a classic case of life imitating art. In Briarpatch, Dawson’s character has an illicit affair with her boss, who happens to be… drumroll, please… a senator. Dawson has done double duty in the spotlight for the past 18 months since she became romantically involved with New Jersey Sen. and onetime presidential candidate Cory Booker. “We did the pilot in September 2018, and I started dating Cory in October 2018, so at first, there wasn’t anything at all!” Dawson says of the similarity. “It was after [we started dating] that I was like, ‘Oh, that’s gonna maybe be weird.’”

Booker’s chief of staff recently asked Dawson what they could expect from the show. Dawson laughs, recalling, “I was like, ‘Well, he’s a senator, but we are having an illicit affair. And yeah, he does have aspirations for the presidency and he also speaks Spanish. But besides all of that, there are no similarities!’”

“It’s the first time I felt like I had to be responsible about my choice of love, which is a challenging thing to do.”

Dating a political figure is new territory for Dawson, and it’s clear that Booker is not a regular boyfriend. “It’s the first time I felt like I had to be responsible about my choice of love, which is a challenging thing to do,” she says. “If you fall in love, you fall in love. But there’s another aspect I had to consider: what this meant in [putting] a microscope on my family and particularly on my daughter.” Dawson adopted her daughter Isabella, now 17, in 2014. “But in each other I think we found our person,” she adds.

When we meet, it’s been less than a month since Booker bowed out of the presidential race. She seems equal parts bummed and relieved. One big change since then? “He’s here!” Dawson exclaims of Booker’s newfound freedom. The senator doesn’t appear during our interview, but he’s been with her the whole day and is currently picking up food for Dawson and her team. Next on the docket for the pair is a vacation. “I’ve burnt out before, and burning out is not pretty,” Dawson says. “And it ends up degrading everything else you’re passionate about.” She used to think self-care was “bougie,” but soon realized it’s essential for both her acting and activism. “You can’t shoulder all of that burden all the time,” she says.

Dawson’s interest in activism long precedes her relationship with Booker — her friends have long called her “Senator Dawson” — and her résumé is stacked with causes she cares about. She co-founded the now 15-year-old Voto Latino, an organization that encourages Latinx voters; she fights violence against women through the movement V-Day; and she’s deeply involved in the Lower East Side Girls Club, which helps break the New York neighborhood’s cycle of poverty. Dawson’s eyes light up as she motors through her activist lanes breathlessly for five minutes straight, but she halts with a wide-eyed look of confusion when, after discussing advocacy for LGBTQ rights, I bring up her 2018 Instagram post celebrating Pride month, which many took to mean she was coming out herself.

“People kept saying that I [came out]... I didn’t do that,” she says. “I mean, it’s not inaccurate, but I never did come out come out. I mean, I guess I am now.” She quickly pivots to remove herself from the equation, clarifying, “I’ve never had a relationship in that space, so it’s never felt like an authentic calling to me.”

As we’re about to part, I ask Dawson if she’s endorsing any one candidate now that Cory Booker is out of the running. (She supported Bernie Sanders in 2016.) Slightly evasive, she says she’s going to back whomever becomes the Democratic nominee. She then launches into another speech about why this election is so important, but her publicist seems eager to pull her away — and plus, Cory Booker is just outside, waiting with their lunch.

Editor's note: This article has been updated to accurately identify Dawson's daughter, Isabella.