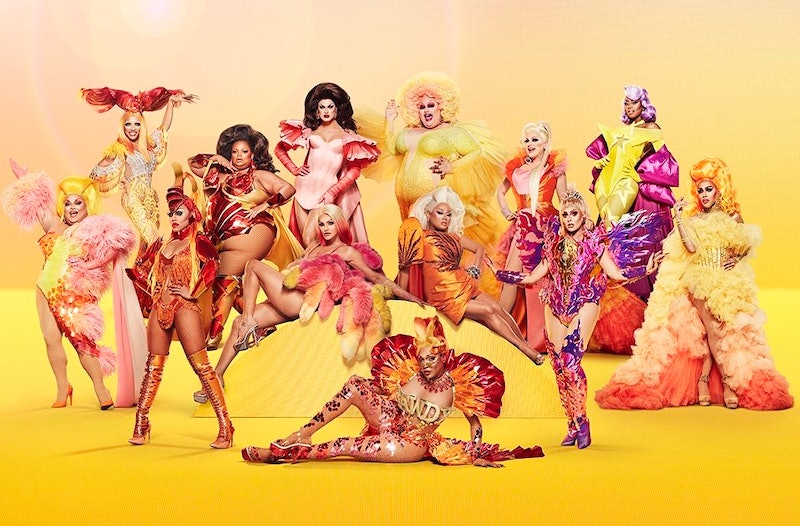 The moment Drag Race fans have been waiting for has finally arrived — well, one of the moments at least. The cast of RuPaul’s Drag Race All Stars sixth installment has been unveiled, and it features a lineup of sickening queens from many different seasons, including a healthy mix of some of the franchise’s earliest contenders and a handful of very recent favorites who were on fans’ All Stars wishlists. The lineup of 13 returning queens features several stars who have already taken part in more than one season of the Emmy-winning reality show, including three who have competed in earlier All Stars seasons.

The lineup leaked early on May 26 with the season’s promotional image appearing online before World of Wonder officially announced it, but WoW quickly confirmed the talents slated to vie for the crown this year. All Stars 6 won’t be shown on either Logo or VH1, where past iterations have appeared, so those who want to watch the program will have to sign up for the new Paramount+ streaming service to catch all the beauty, the glamour, and the drama.

Here are the 13 queens slated to compete on RuPaul’s Drag Race All Stars 6 starting June 24.

One of four queens from Season 11, A’keria Chanel Davenport is already a strong contender, as she concluded her run in the top four of her showing. She’s a member of the legendary House of Davenport, which has produced fellow former Drag Race contestants like Kennedy Davenport, Sahara Davenport, Honey Davenport, and All Stars 4 winner Monet X Change. In between seasons, A’keria has starred in music videos with Lizzo (“Juice”) and Taylor Swift (“You Need To Calm Down”).

Eureka O’Hara made unfortunate Drag Race history when she was forced to leave Season 9 just two episodes in after she tore her ACL. She was invited to return in Season 10, and she made it all the way to the top three, eventually losing to Aquaria. After her second installment of the reality franchise, she co-starred in HBO’s We're Here alongside Drag Race legends Shangela and Bob the Drag Queen.

After tying for second on Season 7 of Drag Race alongside Pearl (they both lost to Violet Chachki), Ginger Minj looked ready to snatch the crown in All Stars 2, widely regarded as one of the best seasons of the show, but sadly the competition was a bit too tough. She was the second queen voted off in that showing.

Originally named Jan Sport, the New York City queen changed her moniker when she appeared on Drag Race, as there were legal issues with her being named after a real brand. A singer and dancer, Jan was largely expected to go all the way, but she finished somewhere in the middle instead. Before appearing on the show, she and her girl group Stephanie’s Child attempted to make themselves known on both The Voice and America’s Got Talent.

Jiggly Caliente may not have been the best contestant on Season 4 of Drag Race, but she was certainly one of the most memorable. After finishing in eighth place, the Queens native went on to score a recurring role on Pose, and she currently co-hosts Apple TV+’s Translation. As an actress, she has also appeared on Ugly Betty, Search Party, and Broad City.

One of the earliest queens most people remember, Pandora Boxx competed on both Season 2 of Drag Race and the first season of All Stars, and now she’s back for more. As if appearing on both of those stagings wasn’t enough, she was a major player in the spinoff series Drag U, which ran for three seasons and wrapped almost a decade ago, so she’s a true veteran of working with RuPaul.

Another Season 11 queen, Ra’Jah O’Hara will have to compete against those she’s already faced in this competition. She ended up sending Scarlet Envy home in a lip sync (more on her in a second), but her run didn’t last much longer, as she left the competition the very next episode. The Dallas queen may use the last name O’Hara, but she is not in the same drag family as Phi Phi and Asia O’Hara.

The drag daughter of Season 7 runner-up Pearl, Scarlet Envy had big shoes to fill when she appeared on Season 11 of Drag Race, but sadly her time on the program was fairly short, as she went home sixth. Now, she’ll have another chance to show she’s a real fighter.

When Serena ChaCha arrived for Season 5 of Drag Race, she was confident that her art school education, which she had just completed, would serve her well. The very young queen (she was just 21 at the time of filming) came off as cocky, which didn’t paint her in a great light, and it was embarrassing when she then went home second.

Yet another Season 11 contestant (the fourth!), Silky Ganache was either loved or hated by all those who watched. She was loud, proud, and commanded attention, and while she didn’t sit well with everyone, it was impossible to ignore her. Since taking part in that season, when she came in third (with A’Keria Davenport) Ganache has worked extensively with the production company behind Drag Race for several series on its streaming platform WOWPresents Plus.

Another Season 2 queen, Sonique likely has a lot to show this time around, as so much time has passed. She has continued to perform in the decade since she was on TV, and she has worked as a dancer with Lizzo and Miley Cyrus, to name just a few stars. Sonique made history when she spoke openly about being transgender after her season, as she paved the way for a number of women who have followed.

Trinity K Bonet has an outsized personality at times, and she was an expert lip sync performer, which helped her stay in the competition on Season 6 as long as she did. She opened up about her HIV diagnosis, becoming just the second contestant to do so, as Ongina did the same several seasons before. Her brave revelation surely helped many viewers, and her impact should not be understated.

Isn’t it about time a Puerto Rican queen was crowned? Yara Sofia will try to win in her third try, as she has already appeared on Season 4 and the first iteration of All Stars, but sadly, she didn’t win either. The former Miss Congeniality will be one to watch this time around, as she is too ridiculous not to enjoy.

More like this
'RHOSLC’s Heather & Whitney Are Still On A “Friendship Break” After Season 3 Reunion
By Jake Viswanath
Everything To Know About 'The Real Housewives Ultimate Girls Trip' Season 4
By Jake Viswanath
'Bachelorette' Vet Clare Crawley Revealed Her Stunning Wedding Photos
By Stephanie Topacio Long
Everything To Know About 'RHOSLC' Season 4
By Jake Viswanath
Get Even More From Bustle — Sign Up For The Newsletter
From hair trends to relationship advice, our daily newsletter has everything you need to sound like a person who’s on TikTok, even if you aren’t.