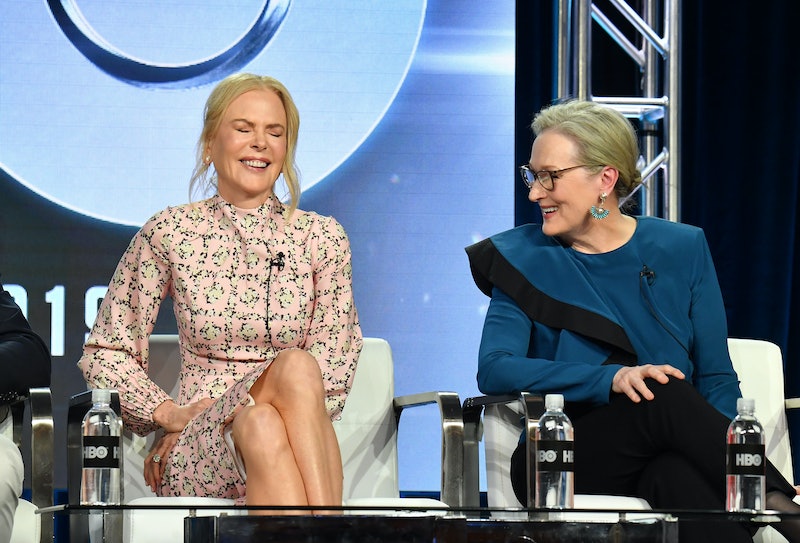 Don't worry, Broadway fans — the long-awaited film adaptation of The Prom is still on its way, and it might be coming to your screen sooner than you think. According to his recent Instagram tease, Ryan Murphy's Netflix musical The Prom will premiere around Dec. 25, after the all-star cast finished filming amid the COVID-19 pandemic. On Monday, Murphy posted a photo of The Prom's "icon packed" cast on Instagram, showing the first glimpse of Meryl Streep, Nicole Kidman, Andrew Rannells, and James Corden, who star as four out-of-work actors who travel to Indiana to help a teen whose prom was canceled after she tried to bring her girlfriend as a date.

Murphy called the cast, which also includes Kerry Washington, Keegan Michael-Key, and Tracey Ullman, a "group of true troopers" in his post, confirming that they returned to complete production in the midst of the coronavirus pandemic. The cast, he wrote, "finished shooting during COVID so we could give everybody an inspirational aspirational story that we all need right now." He added that the film's premiere date wasn't far off, teasing, "Christmas is right around the corner."

Fans looking forward toThe Prom might be relieved to hear the film was able to wrap up production. In May, Murphy revealed the coronavirus pandemic disrupted filming, but the team was still hoping for a release date in time for the holidays, as per Playbill. Murphy revealed The Prom only had two more days of filming when COVID-19 lockdowns went into place, and that all leads — including Meryl Streep, who must absolutely be protected at all costs — had wrapped. Production on The Prom concluded in Los Angeles in July with strict COVID-19 regulations on set, as per ET. The movie reportedly only needed a few pick-ups, so the cast and crew were able to come together to finish the project for fans.

The Prom, which debuted on Broadway in 2016, is set to be the perfect uplifting movie to watch for a serotonin-boost around the holidays. Murphy called the story "uplifting, heartfelt, and special" when the project was announced in 2019, saying: "It’s truly an original that celebrates the underdog and says in a loving spectacular way." He added that the story shows "LGBTQ rights are human rights" and that he had "a special connection" to the musical, as he grew up in Indiana, where the story takes place, as well.

Many of the stars have gushed about working with such an iconic cast, including Kidman, who previously worked Meryl Streep on Big Little Lies. "I am watching Meryl Streep and James Corden do work, I am just going, ‘Whaaaat,’" Kidman said at the 2020 Critic's Choice Awards, per ET. Washington also praised Meryl Streep's performance in the film, saying, "Meryl Streep has a belt, people. Like a belt, a for-real Broadway belt," according to MSN. Luckily, it seems the producers did their best to prioritize the health of Meryl Streep and her belt while wrapping up this film, and all fans will get to witness her performance on the streaming platform in December.