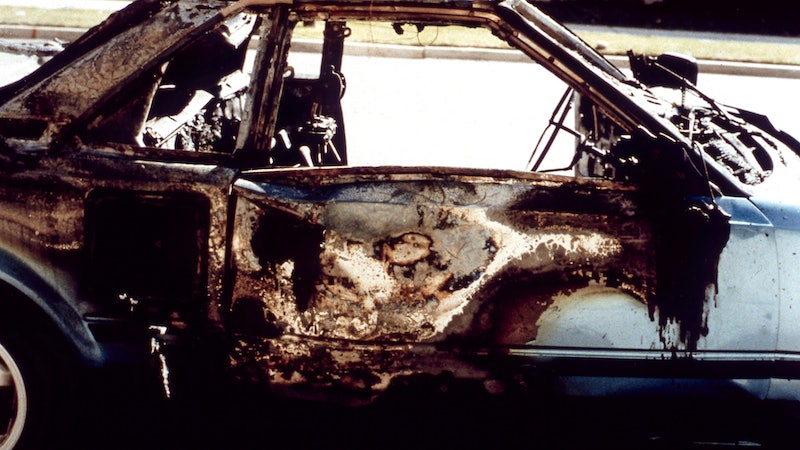 In October 1985, three bomb explosions rocked Salt Lake City, Utah, killing two people and putting the whole city on edge. Netflix's new docuseries Murder Among the Mormons revisits the infamous case, now known as the Salt Lake City bombings, which took place across two days in October 1985 and were carried out by a man named Mark Hofmann in order to cover up the high-profile documents he'd forged and sold to the Mormon church.

The first bomb went off on the morning of Oct. 15, 1985 in downtown Salt Lake City. The bomb killed Steve Christensen, a financial advisor who collected historical documents as a hobby and was the intended target of the bomb, and wounded a secretary in Christensen’s office. Christensen had purchased some of Hofmann’s Mormon Church-related forgeries — including the “Salamander letter” — and Hofmann was worried that Christensen would expose him.

The next explosion went off two hours later, killing Kathy Sheets, whose husband J. Gary Sheets worked with Christensen in CFA Financial Services. Per the Washington Post, Hoffmann didn’t intend to kill anyone from the Sheets family, but he hoped a bomb at their household would lead police to believe Christensen’s death was tied to the pair’s financial work.

A day later, a bomb went off in a car parked in downtown Salt Lake City. The only victim was a seriously injured Hofmann, who had been prepping the bomb while parked near Temple Square. Hofmann severely injured his legs — and became an immediate suspect in the case — because of the scope of his injuries. Once authorities became privy to his mounting debt problems — and his promise to deliver the “McLellin Collection,” a cache of documents he implied to be unflattering to the Mormon church — investigators were able to uncover his increasingly precarious web of lies and forgeries.

Hofmann eventually pled guilty to two counts of second-degree murder and two counts of theft by deception. He remains in prison today.