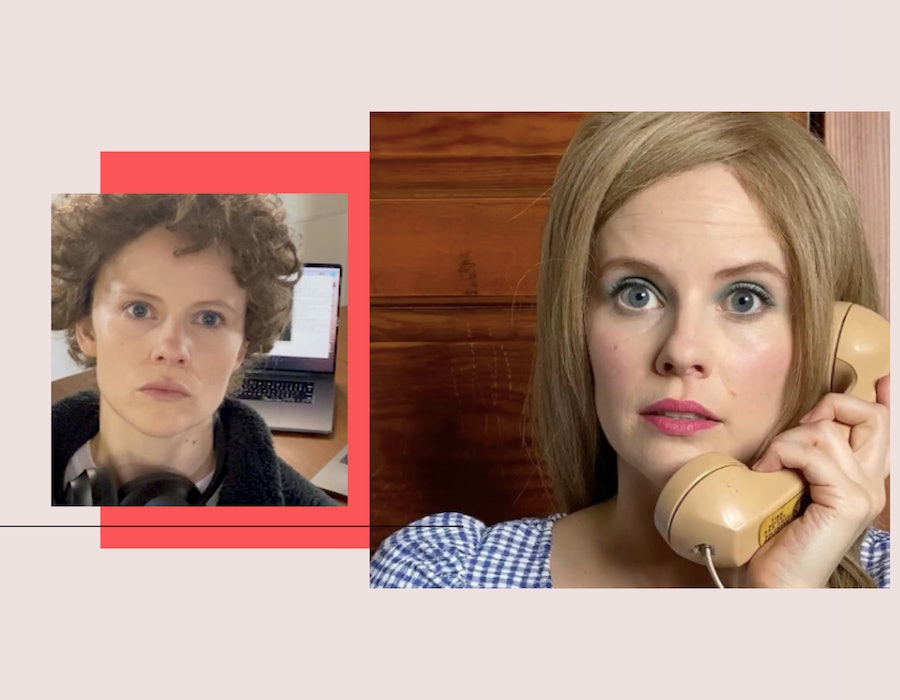 Before the wigs, the famous co-stars and the loyal following came to define her "Quarantscene" Instagram videos, Sarah Ramos was just trying to figure out how to use TikTok over the Thanksgiving holiday. She turned to what she knew best — the 2000 cheerleader classic Bring It On — to make sense of the new medium, filming a re-creation of the scene where Missy and Torrance get into a fight over the Toros' stolen routine in her driveway. Then people asked for more.

It wasn't until the Parenthood actor found herself quarantined in her Los Angeles home amid the coronavirus pandemic that she had the time to film some suitable follow-ups. Now, her Instagram is filled with uncanny yet silly recreations of everything from Legally Blonde to The Social Network to The Hills to Dakota Johnson's infamous appearance on The Ellen DeGeneres Show. Bustle spoke with Ramos about transforming her home into a set and trying to get Reese Witherspoon's attention.

You've re-created scenes from everything from cult classics to prestige dramas to Riverdale. It's quite a range! How you do decide what scene to re-create?

Thank you so much for acknowledging that, the range. I'm a very obsessive pop-culture consumer. I had like three main obsessions when I was a kid, which were Kirsten Dunst (I watched all of her movies), Reese Witherspoon, and the Olsen twins. That was my media diet when I was a tween. So it is anything that hits that axis of stuff that was marketed to me in the early 2000s that I really latched onto and used to get through my childhood, which wasn't always super easy. I tend to choose pop culture that helped me get through difficult times because we are in a difficult time, and the only way I know how to get through confusing, scary stuff is through television and connecting with weird pop culture.

But I didn’t want to be relegated [to being only a] nostalgia girl. We're tackling big filmmakers here. We’ve got David Fincher in the mix; we've got Noah Baumbach. We have the gravitas, which people might not initially see in Bring It On, even though it is there!

You've enlisted the help of actor friends in some of your videos. What has it been like to reconnect with people through making these?

It's interesting looking at social media, because I didn't really know how to use it [before]. I had it and sometimes I would post childhood pictures with celebrities, but it felt like I was trying to make my life look cool and that filled me with anxiety and was boring. I get bored of being stressed out about making myself look cool. During quarantine, I really [felt] like this is a genuine way to connect with people over something that I love and want to talk to people about. I’m doing pop culture that I'm obsessed with, and it turns out I'm not alone. So many people I know love this stuff too, and they recommend their own scenes that I hadn’t thought about. I love seeing the scenes that people want to do. When I was talking to Dylan O'Brien, we ended up doing [The Social Network] video because he had an amazing Andrew Garfield impression.

In the same way I have my own repertoire of media I am familiar with in my bones, so do so many other people, and that's so exciting to see because it comes from such a genuine place. I knew Elle [Fanning] and I was thinking about Cameron Diaz, who is and was such an icon of my childhood, and just felt like there is no one like that today. But actually there is someone who is as smiley and charming and positive and fun and gorgeous and that is Miss Elle Fanning. I am lucky enough to call her a friend, so I suggested she do Cameron Diaz and she loved My Best Friend's Wedding, so it all came together.

Do you rehearse before filming?

No rehearsal. It's very much an off-the-cuff thing, which is also the fun of it. It doesn’t have to be perfect, it's not taking itself really seriously. I put the time and work in but the acting to me is just supposed to make you feel joy. It's a way to connect with something that inspires you.

How do you pull together all the outfits, wigs, and sets?

The sets are all just my house, so I think that everybody has seen every corner of my house. We used the bathroom for the Cinderella Story [video]. I've used my office for Marriage Story and Don’t Tell Mom the Babysitter's Dead — who would have thought you could use the same set for both!

I mostly use my own wardrobe and approximate it, but I'm having a little bit of fun with some future videos where I get exact replicas [of costumes]. My fiancé has pushed me to get as close to it as you can! The wigs were a donation from my hairstylist Eddie Cook. I gotta say, I never played with wigs much, but they changed the game for me.

I never considered myself someone who did hair or makeup — I've always been an air dry [girl]; I always skip the beauty pages in magazines. So I'm really proud of my Don’t Tell Mom the Babysitter's Dead updo because I didn’t know I could do an updo, and I'm proud of the Julia Roberts hair in My Best Friend's Wedding, because she's known for her hair and I'm not going to say [mine] looks anywhere near as gorgeous, but the reference was clear.

More like this
The Kardashian Forerunners
By Mariah Smith
At 14, Vanessa Bayer Was Bad At Sports & Lusting Over Jared Leto
By Samantha Rollins
Laura Dern Said “Cultural Awareness” Made Her Rethink This 'Jurassic Park' Fact
By Grace Wehniainen
'Heartstopper’s Kit Connor Admitted His “Fat Crush” On A ’90s British Rom-Com Star
By Sam Ramsden
Get Even More From Bustle — Sign Up For The Newsletter