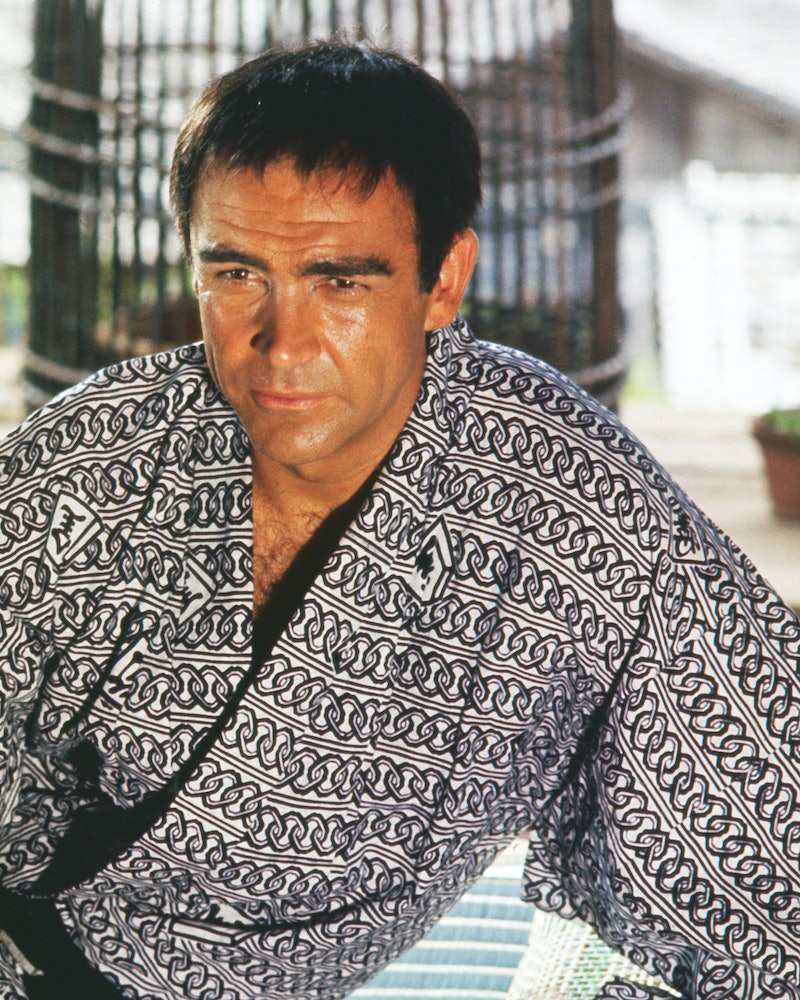 Hollywood's first James Bond, Oscar winner Sean Connery, has died at age 90, his family confirmed to the BBC on Saturday, Oct. 31. According to the Scottish actor's son, Connery had been "unwell for some time," and died peacefully in his sleep while in the Bahamas. Both those who knew him personally, as well as those who were simply fans, mourned the loss on social media, with the earliest celebrity tributes to Connery coming from such stars as Daniel Craig, Hugh Jackman, Elizabeth Hurley, and Cary Elwes.

Daniel Craig, who took over the 007 role in 2006's Casino Royale, released a statement on Twitter. "It is with such sadness that I heard of the passing of one of the true greats of cinema," he wrote. "Sir Sean Connery will be remembered as Bond and so much more. He defined an era and a style. The wit and charm he portrayed on screen could be measured in mega watts; he helped create the modern blockbuster. He will continue to influence actors and film-makers alike for years to come. My thoughts are with his family and loved ones. Wherever he is, I hope there is a golf course."

Earlier, Bond producers Michael G. Wilson and Barbara Broccoli also reacted to the news in a joint Twitter statement: "We are devastated by the news of the passing of Sir Sean Connery. He was and shall always be remembered as the original James Bond whose indelible entrance into cinema history began when he announced those unforgettable words — 'The name's Bond… James Bond' — he revolutionized the world with his gritty and witty portrayal of the sexy and charismatic secret agent," the pair wrote in a joint statement. "He is undoubtedly largely responsible for the success of the film series and we shall be forever grateful to him."

Fellow actors, such as Hugh Jackman and Elizabeth Hurley shared classic photos. In his tweet, Jackman noted that he "grew up idolizing" Connery, calling him a "legend on screen and off." For her part, Hurley referred to the actor as "glorious" in her memorial. Later, Viola Davis called Connery "our James Bond icon."

Connery's United Kingdom brethren, including Cary Elwes and First Minister of Scotland Nicola Sturgeon, also paid their respects online. With "a broken heart," Elwes honored "the only Bond. From Scotland with Love." Meanwhile, Sturgeon referred to Connery as one of Scotland's "best loved sons."

His The Hunt for Red October co-star Sam Neill remembered every day on set being an "object lesson in how to act on screen." John Cleese, who worked with Connery on 1981's Time Bandits, tweeted that he was "the only one of us to find The Holy Grail."

The family of the late Sir Roger Moore, who succeeded Connery as Bond in 1972, noted that the actor "always maintained Sean was the best ever James Bond."

Arnold Schwarzenegger reminded his followers that "one of the greatest actors of all time" was also once a "bodybuilder who placed in the Mr. Universe contest."

Filmmakers, including Paul Feig and Kevin Smith, also weighed in. While Feig remembered the actor, who also starred in The Untouchables, Highlander, Indiana Jones and the Last Crusade, and The Rock, as effortlessly suave and cool, Smith shared memories involving his own late father.

After sharing a thread of "great Sean Connery movies," CNN's Jake Tapper made note of the many bad Sean Connery impressions sure to come — including his own, at least according to his wife — in the wake of the sad news. Star Trek actor George Takei also shared a lighthearted, pun-filled tribute, referencing some of the "suave" Connery's films. For his part, author Stephen King referenced Connery's "first starring role, as a washed-up boxer."

As the tweets show, people are both shaken and stirred by the loss of a Hollywood icon.