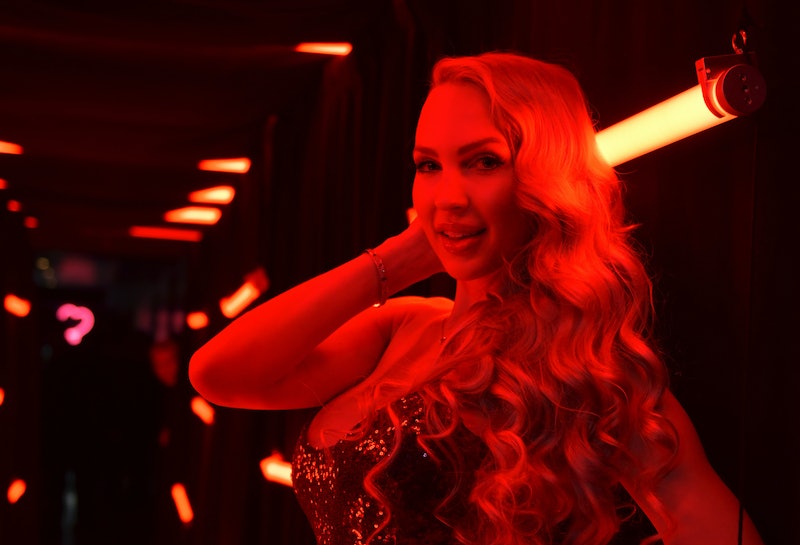 Most people have to deal with their families or kids at home, but when one of the Oppenheim Group agents goes home at night, she has an actual wild animal to tend to. During a new episode of the recently revived MTV Cribs, Selling Sunset star Christine Quinn claimed she has a tiger at home. So no, we won't be visiting her Los Angeles mansion anytime soon.

According to People, Quinn said that she and new husband Christian Richard decided to keep a tiger on their property as a security measure, along with their "armed guards" and "canine unit dogs," after realizing that viewers could find where their house is because it's shown on Selling Sunset. "My neighbors recognized it and called me up," she said. "I realized it meant people knew where we live now. That was a little scary to me because we are here a lot."

Additionally, the couple was warned that "a lot of weird things" were occurring in their neighborhood, which inspired them to take some extra precautions. "I joked, 'If guns and dogs don't scare people, we need a tiger'," Quinn said. "Then I decided it would be really fun to do that. So we found this guy who trains tigers as pets and got one."

In the episode, the tiger was seen resting on the grass without a leash or a cage, but the agent didn't seem to fear or regret her decision at all. "He is so friendly," she said. "When we've had the tiger, he isn't even on a leash. I've been within a foot of him and I wasn't nervous at all." However, as glamorous as it may seem to have a literal tiger on your massive property, Quinn may not actually keep the tiger as a pet.

In a statement issued to the New York Post, Quinn's rep denied that she owned the tiger at all. "Her statements were simply an embellishment as part of a storyline for MTV Cribs," the rep said. "The appearance of the tiger was fully permitted by the Los Angeles Department of Animal Services. Additionally, an officer from the Animal Protection Unit of LA Animal Services was on-site to guarantee the tiger's wellbeing." This theory checks out, considering that California law does not allow residents to keep tigers as exotic pets.

However, Quinn does seem keen to have the tiger around as often as possible, even if it's really just for security. "I never thought I would be the kind of person who would need all this… having armed guards in the driveway," she said on the show. "But I'm thankful to be in this position. You're only hated if you've done something great. That’s how I like to look at it."