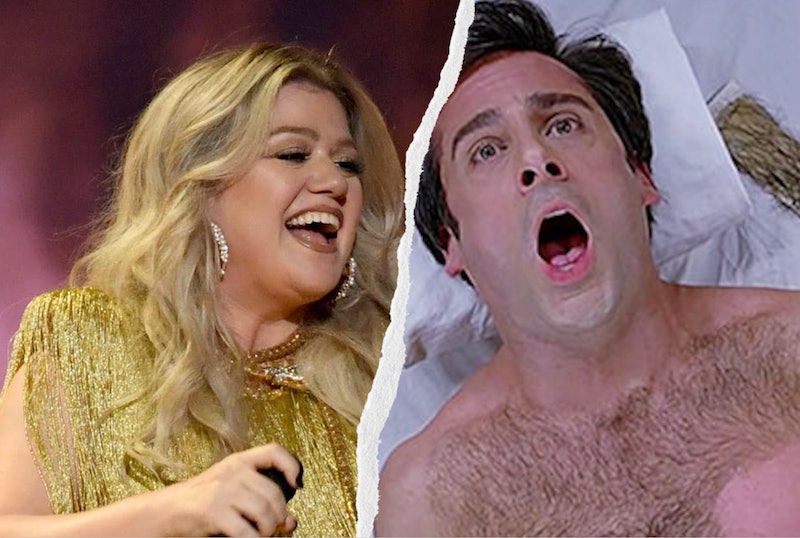 Kelly Clarkson has released tons of hit singles, won three Grammys, and even launched a successful daytime TV talk show, but aside from all of her many accomplishments, one joke has followed her around for years: “Ahhh! Kelly Clarkson!” The line from the 2005 film The 40-Year-Old Virgin sounds simple out of context, but it has resonated with millions, making them laugh from the moment it was first seen until today. Now, the man behind it has finally apologized for writing it — not that anyone was asking him to.

While appearing via video chat on The Kelly Clarkson Show, Seth Rogen was pressed about the joke by the host. “Judd Apatow told me, and I want to know if it’s true, that it’s your fault that people scream my name everywhere I go,” she said. Clarkson nailed home just how pervasive the gag has become throughout the years, claiming, “I could literally do anything. Doesn’t matter how many hits, what I do in life ... I could save a family from drowning … literally the one thing people know me from is …” before doing her best rendition of the famous line.

Clarkson is, of course, referring to the moment in The 40-Year-Old Virgin when star Steve Carell, who plays the man of a certain age who has never, well, enjoyed the company of a woman, is getting his chest and stomach waxed. As each strip is ripped off his body, he screams in agony, with one of his many lines randomly referencing the inaugural American Idol winner.

Rogen, who also starred in the movie, couldn’t hide his laughter as he was questioned, likely from a mixture of pride and possibly embarrassment, but he didn’t deny being the mastermind of the line. “I’m terribly sorry, first of all,” before quickly admitting that yes, it is true, he wrote the joke. The actor, writer, and producer went on to explain that he and director-producer Apatow knew Carell wouldn’t be in any state to remember lines, as the waxing scene was real, so Rogen was tasked with writing a number of one-liners that could be held up on cue cards nearby, allowing the actor to choose them as he wished.

“Ahhh! Kelly Clarkson!” was included among a bunch of “clean” jokes, as Apatow wanted to make sure some of them didn’t feature any curse words. During the interview, an image of this list of lines was shown, and Clarkson pointed out that her famous bit was sandwiched right in between “Burger-Panties” and “Throbbing Monkey Tail.”

While Rogen did go out of his way to apologize to Clarkson, the host made it clear she doesn’t actually mind the attention, telling him, “I loved it so much. I truly did!” When Clarkson launched her daytime talk show in September 2019, Carell kicked off the program with a surprise appearance. All he needed to do was utter the line once more, and things were off to a great start, as the audience couldn’t have been more thrilled to be there to hear him say that in person.

Last summer, Clarkson asked Apatow about the joke when he appeared on her show, and the multi-hyphenate was quick to pass the buck, stating, “I’m going to blame Seth Rogen.”

More like this
Howard Stern's Net Worth: Is He The Richest Man In Radio?
By Hugh McIntyre
Taylor Swift Cries In Sneak Peek Footage Of David O. Russell's Secretive Film 'Amsterdam'
By Jake Viswanath and Radhika Menon
You Might Want To Rewatch 'Elvis' For This Britney Spears Easter Egg
By Grace Wehniainen
What Is Ariana Grande's Net Worth? When It Comes To Money, She Has No “Problem”
By Hugh McIntyre
Get Even More From Bustle — Sign Up For The Newsletter