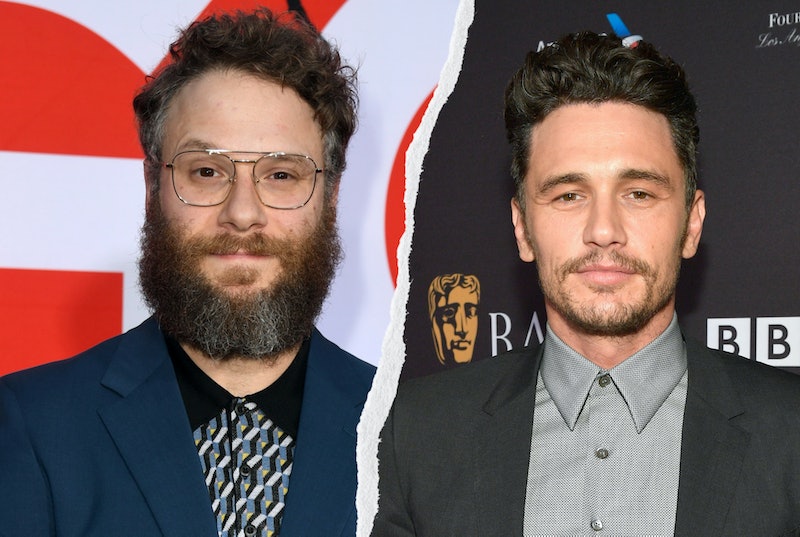 Seth Rogen has distanced himself from longtime friend James Franco — and for good reason. In a recent interview with The Sunday Times, the American Pickle actor reflected on Franco’s sexual misconduct allegations and how they’ve impacted their personal and professional relationship. “What I can say is that I despise abuse and harassment and I would never cover or conceal the actions of someone doing it, or knowingly put someone in a situation where they were around someone like that,” Rogen said when asked about the validity of the victims’ claims.

Franco was accused of sexual misconduct first in 2014 and again in 2018 after showing up to the Golden Globes wearing a Time’s Up pin on his lapel. Sarah Tither-Kaplan, one of the women who made allegations against Franco, told The Los Angeles Times in 2018 that seeing him wear the pin at the high-profile event “was like a slap in my face.” It’s also what pushed her to come forward with her story. In February 2021, Franco settled his lawsuit with Tither-Kaplan and Toni Gaal, who were both students at his now-defunct acting school.

As a result of the allegations, Rogen told The Sunday Times that it’s “not a coincidence” that he and Franco haven’t worked together recently. And while he certainly doesn’t regret cutting professional ties with his Pineapple Express co-star, he “very much regrets” making a joke about Franco on Saturday Night Live in 2014, when he was first accused. “I decided to prank James Franco,” Rogen said in his SNL monologue at the time. “I posed as a girl on Instagram, told him I was way young. He seemed unfazed. I have a date to meet him at the Ace Hotel.”

“It was a terrible joke, honestly,” Rogen continued, adding that he’s since changed his stance on working with Franco. “I also look back to that interview in 2018 where I comment that I would keep working with James, and the truth is that I have not and I do not plan to right now. ... I don’t know if I can define that [our friendship] right now during this interview. I can say it has changed many things in our relationship and our dynamic.”

The Long Shot star went on to explain that despite distancing himself from someone he once considered a friend, he knows that his experience was nowhere near as “painful and difficult” as the experiences of the victims. Franco, however, has long maintained his innocence. “Look, in my life I pride myself on taking responsibility for things that I have done,” the Spider-Man actor told Stephen Colbert in 2018. “I have to do that to maintain my well-being. I do it whenever there’s something wrong that needs to be changed. I make it a point to do it.”

“The things that I heard that were on Twitter are not accurate,” Franco continued in the interview. “But I completely support people coming out and being able to have a voice because they didn’t have a voice for so long. So I don’t want to shut them down in any way. I think it’s a good thing and I support it.”

More like this
Twitter Is Shook As Tom Brady Holds Back Tears Announcing His 2nd Retirement
By Marina Watts
Who Is "Daddy" Pedro Pascal Dating? People Are Thirsting Over The 'Last Of Us' Star
By Alyssa Lapid
'RHOSLC’s Heather & Whitney Are Still On A “Friendship Break” After Season 3 Reunion
By Jake Viswanath
Everything To Know About 'RHOSLC' Season 4
By Jake Viswanath
Get Even More From Bustle — Sign Up For The Newsletter
From hair trends to relationship advice, our daily newsletter has everything you need to sound like a person who’s on TikTok, even if you aren’t.