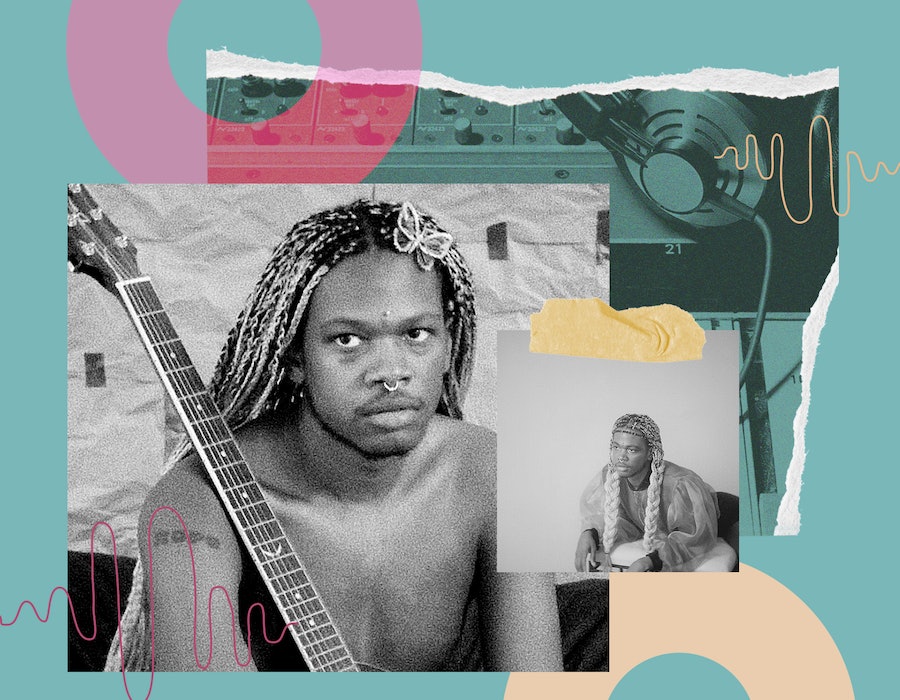 Shamir is not one to mince words. “Brutal honesty is my kink,” the musician tells Bustle. “I love the kind of honesty that makes you feel uncomfortable.” It's this brand of radical transparency that's at the heart of the 25-year-old’s work. Over the course of seven albums — which explore a mix of indie rock, lo-fi grunge, country, and disco pop — Shamir's music has laid his most intimate moments bare. From his heartbreaks, to his diagnosis with bipolar disorder, to the racial violence he’s had to contend with as a Black, queer, nonbinary artist. “I try to be as loud as possible in a world that constantly wants me to shut up, that doesn’t even want to acknowledge my existence,” he explains. And Shamir's latest self-titled album is his loudest, most defiant to date.

Shamir was first introduced to music by his aunt, a poet who set up a small recording studio in her bedroom in suburban Las Vegas long before "bedroom pop" became a genre unto itself. “I used to sneak in and be like, ‘I’ll be quiet!’" he says. "I got to see firsthand, at a very early age, the whole writing and recording process.” When Shamir moved to Brooklyn in his late teens, he took his adolescent learnings with him. Living in the artist collective Silent Barn, Shamir worked with an indie label to put out his early music like the disco track “If It Wasn’t True," which landed him a shoutout in Vogue and got him the attention of the major British label XL.

Shortly after signing to XL, the then-19-year-old Shamir released his debut album, Ratchet. While the album was a critical darling — with Pitchfork calling it “a study in the best dance-pop of the past decade” — Shamir didn't stay with the label long. “I felt [silenced] pretty much the whole time I was signed,” he explains of his decision to start releasing his music independently. “I’ve just been let down so many times. So at the end of the day I can really only [rely on] myself.”

And with his latest independently released album, Shamir feels he's finally captured his sound the way he hears it in his head: a cacophony of pop and country mixed with a touch of Gwen Stefani and grand orchestral crescendos. The result is proof that Shamir still isn't concerned with fitting into the music industry's box — or anyone else's, for that matter. “This industry was not built with [Black people] in mind,” he says. “So we have to carve out a spot."

Below, Shamir talks about his love for Taylor Swift, his go-to road trip album, and taking up space.

On Taylor Swift & His Other Surprising Musical Obsessions

I’ve had the craziest up and down stan relationship with Taylor Swift.

The highs of my love for her [were] at the beginning of her career, [when I was] just starting to write my own songs and she was my biggest songwriting inspiration. The lows [were] her past silence on political issues. But [I’m] back on the high again [now that] she finally started being vocal on political issues... and released the best album of 2020.

So what were your thoughts on folklore?

I feel just as giddy as I was when I was in elementary school and first saw her singing “Teardrops On My Guitar.” This record really brings me back and she’s so gorgeous and wonderful. I’m really glad we have Taylor Swift. She really is one of the best artists in our generation and continues to prove it.

If it’s a road trip or something, probably [the Alanis Morissette album] Jagged Little Pill. I mean, everyone knows every lyric to every song. You put it on and it's perfect, the whole car is jamming.

Is there a cheesy band you love absolutely unironically?

There are so many things that people find embarrassing that I gladly listen to. I very unironically love Green Day. I love Halsey as well. I think she doesn't get enough credit for how amazing she is at music.

On The Blueprint For His Career & Not Getting Pigeonholed

Is there a moment that you really felt like you had made it as a musician?

The moment that I always said [would make me feel like I made it] hasn't happened. It’s to perform on [BBC2 show] Later...with Jools Holland. I would like that to happen.

Why Jools Holland over all the other late night shows?

What do you wish you could tell other young Black or queer artists who are trying to make it in music?

It’s okay to not know where you fit in. A lot of people will ask, “What is [your] example career?” But how can I as a Black, queer, nonbinary artist give you an example career? A lot of it has been me imagining my own place in this industry. Because if you don't imagine it for yourself, they’re going to pigeonhole you into something you might not even be comfortable with.

Was there anyone you were able to look up to?

I think Mykki Blanco for sure. I also really looked up to Marina [of Marina and the Diamonds] as well, so touring with her during my debut was a dream.

Now you’re that artist for many young people looking to make it — without getting boxed in.

That’s why it’s really important for me to take up as much space as possible these days. I want to show people there’s no one way to have a career. A lot of people look at my career trajectory and see how unique it was — how I was always on the less beaten path — and I like that it’s just as much a part of my story as the music is.

More like this
Craig David Is Still Slicker Than Your Average
By Olivia-Anne Cleary
Even If She Tried, Beth Ditto Couldn’t Stay Away From Music
By Ivana Rihter
'School Of Rock' Changed Joe Keery's Life Forever
By Alyssa Lapid
Everything To Know About Taylor Swift’s 10th Studio Album, 'Midnights'
By Grace Wehniainen and Jake Viswanath
Get Even More From Bustle — Sign Up For The Newsletter