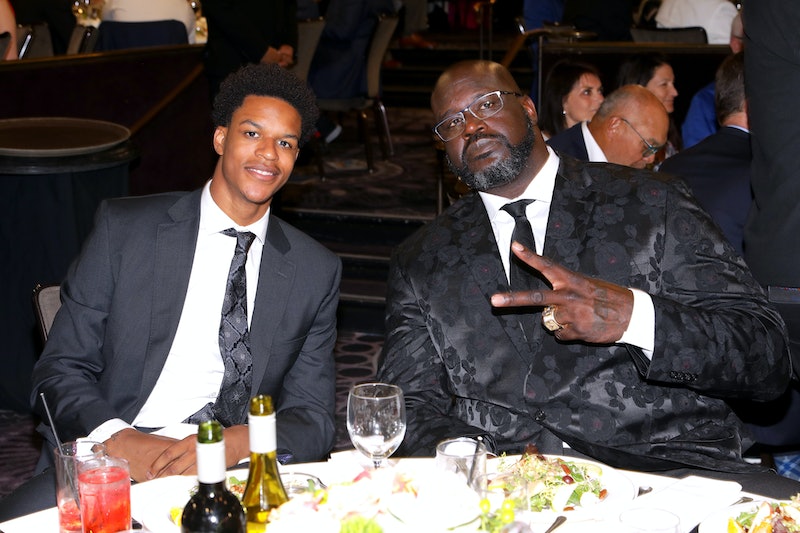 Shaquille O'Neal may be an NBA Hall of Famer, but when he made a play for Megan Thee Stallion, his 20-year-old son, Shareef O'Neal, became the true MVP. It all went down when the "WAP" rapper filmed a recent Instagram Live and Shaq very publicly commented that he was "watching that booty" during the livestream. That prompted his progeny to put him on blast via TikTok.

In the video, Shareef, a collegiate basketball star at Louisiana State University, put a screenshot showing his dad's risqué comment on Megan's video next to footage of his own reaction. His comedic facial expressions took followers though his emotional journey, from confusion to wide-eyed shock to eventual agreement. "I feel you, Pops," he joked in the caption to the video that included Megan Thee Stallion's song "Cry Baby," featuring DaBaby. As of publication, the post had already racked up more than 762,000 likes.

Shaq and ex-wife, Shaunie O'Neal, with whom he also shares children Amirah, 19, Shaqir, 17, and Me'arah, 14, finalized their divorce in 2011, and the former NBA star has not remarried. Despite any parental moments that may occasionally make him blush, Shareef has indicated that both remain important figures in his life. The younger O'Neal explained on ESPN's Now or Never in 2019 that his parents have been with him "through it all." In fact, he even has an image of his father in his LA Lakers jersey tattooed on his right calf.

"I could tell he was surprised. I didn’t tell him I was getting it," Shareef said of his ink during a January interview with UCLA's Daily Bruin student newspaper. "I kind of just showed him and it looked like he wanted to tear up — I could see it, but he doesn’t like showing emotion. He was like, 'Man, that’s dope.'"

Shareef's TikTok trolling very well could have been playful payback for some childhood embarrassment. In his Now or Never video interview, he recalled an incident in middle school in which Shaq paid his class an unexpected visit. After first spotting his 7-foot-1-inch dad peeking through the classroom window, Shareef said he came inside and picked him up and jokingly hung him upside down by his ankles. "He's just like tossing me around just like fake wresting with me, and everybody was laughing," he said.

It was all in good fun, though. "Everybody loves him; everywhere he goes it's always smiles," Shareef added of his dad. "He's just a fun guy."

Their father-son bond is the kind you love to see.

More like this
Everything To Know About Taylor Swift’s 10th Studio Album, 'Midnights'
By Grace Wehniainen and Jake Viswanath
Beyoncé’s Special Tribute To Sister Solange Was Both Touching & Hilarious
By Stephanie Topacio Long
How Ghosts Inspired Kesha’s New Music
By Jake Viswanath
Lizzo Twerks While Playing James Madison's 200-Year-Old Crystal Flute Onstage
By Radhika Menon
Get Even More From Bustle — Sign Up For The Newsletter