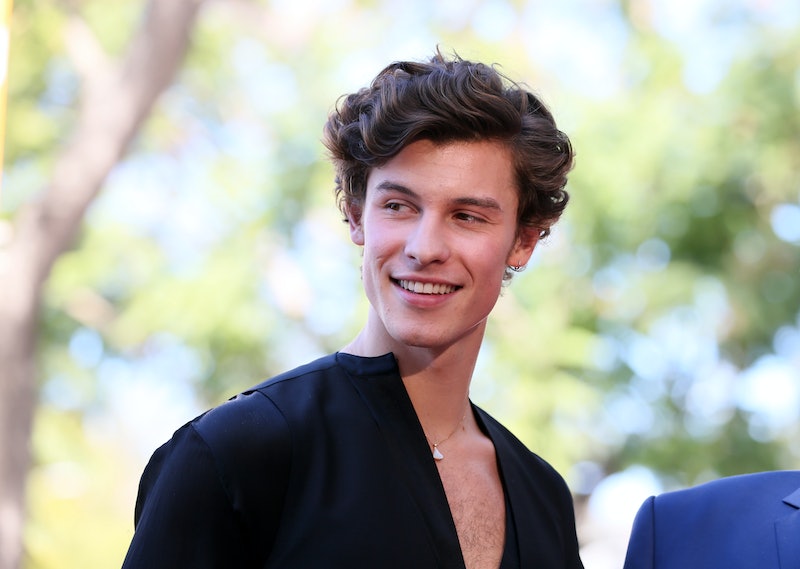 Christmas might fall on Dec. 25, but Shawn Mendes' Netflix documentary is coming to kick the holiday season off a little early. As announced by the streaming service on Tuesday, Oct. 13, In Wonder, a new feature-length doc will be released in November as a treat for fans to prepare them for the singer's upcoming album, Wonder. According to a press release obtained by Bustle, the movie will be a "portrait of Mendes' life" and will chronicle his music journey of the past few years, meaning fans will get a closer look at the singer than ever before.

Given the time frame, the film will likely follow Mendes as he embarks on his whirlwind 2019 world tour, which took him around the world across the Americas, Europe, Asia, and Australia. This just happened to be during the era of "Señorita," his hit collaboration with famous girlfriend Camila Cabello that was released in June 2019, so fans might be able to catch a cameo from the Fifth Harmony alum. The singer serves as an executive producer on the doc, which was helmed by music video director Grant Singer.

Mendes shared the news of his upcoming film on his Twitter and Instagram pages, writing, "Been working on this documentary for so long & am so excited to finally share it with you all."

While Mendes hasn't told fans what to expect from the doc — is it a concert doc like Beyoncé's Homecoming or a more personal look at his songwriting process like Taylor Swift's Miss Americana? — he did admit in a new interview on SiriusXM's Morning Mash Up that Cabello was a huge inspiration for his new album Wonder, which is set to release on Dec. 4, just days after the documentary premieres. "When your girlfriend is an insanely talented, real musician who writes her own music, it's scary to write an album around her," he said. "She really was a champion for this album and I remember back when I first started a lot of the concepts and they felt a little bit intimidating. She would [tell me] once a month, 'Hey, just a reminder, this concept you're on is incredible. It's going to make people feel something really special. Don't stop.'"

In Wonder premieres on Netflix on Nov. 23.

More like this
The 'Love, Lizzo' Harry Styles Scene Is Just 1 Moment That Made Fans Feel Seen
By Brad Witter
Yes, That's Lindsay Lohan's Sister Singing In The 'Falling For Christmas' Movie
By Radhika Menon
Here’s Everything Coming To & Leaving Netflix In December
By Jake Viswanath
North West Has Mastered The Wednesday Addams & Lady Gaga TikTok Dance
By Jake Viswanath
Get Even More From Bustle — Sign Up For The Newsletter