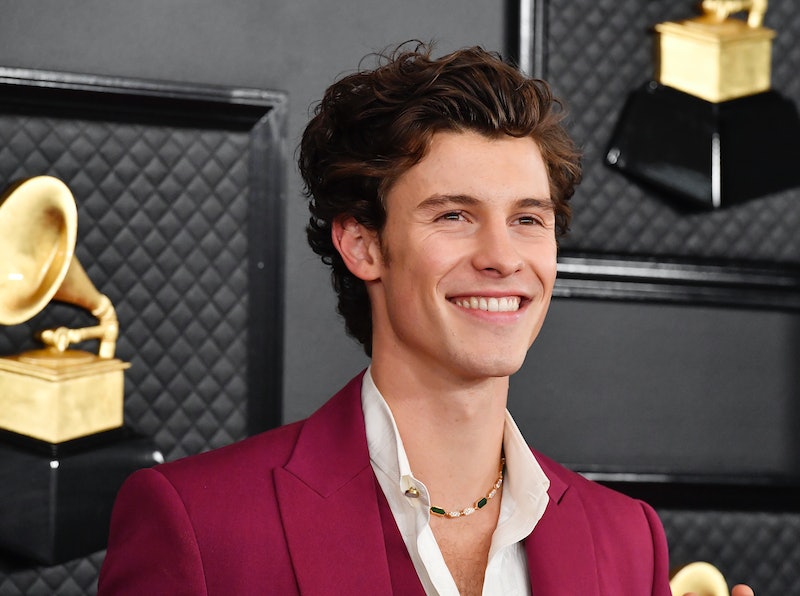 Shawn Mendes has been virtually absent from the music scene since his collaboration "Señorita" with girlfriend Camila Cabello hit number one on the Billboard charts in 2019. Now, not only is he returning with new music soon, but he's also taking a page from the playbook of his friend and collaborator Taylor Swift. Shawn Mendes teased his new album, supposedly titled Wonder, with a new preview video and a mysterious website on Wednesday, Sept. 30, which has fans searching for clues.

Before making his big announcement, fans realized that something was up when the profile pictures of Mendes' social media pages were changed to white squares. Shortly after, the singer tweeted, "WHAT IS #WONDER," before posting a teaser video that reveals the answer... kind of. The video takes fans into a mysterious apartment, where Mendes is seen playing the piano (upside down) and singing the beginnings of a brand new song about going to wonderland, which fans speculate is called "Wonder," of course.

The video cuts out after just one verse and shows the word "Wonder" along with two mysterious dates: Oct. 2 and Dec. 4. Radio host Elvis Duran has already confirmed that Mendes will release his new single "Wonder" this Friday, Oct. 2, and, in a follow up tweet Mendes confirmed that his album would, indeed, be released on Dec. 4.

The singer also linked to a website, whatiswonder.com, on which fans can explore the apartment seen in the album teaser. When you look around and zoom into random areas, mysterious notes and trinkets can be found lying around, including a "setlist." Aside from his previous singles "Lost In Japan" and "Nervous," the list mostly features currently unknown tracks, including "Lost Ones," "Higher," and of course, "Wonder," which fans believe could be songs on his upcoming album. The setlist also includes a phone number that fans can reportedly text to receive updates from Mendes on what's to come.

Other potential clues on the site include mysterious sketches and art supplies, cassette tapes with possible song titles, diary entries that are dated July 2018, and a newspaper with the headline "FAMOUS MUSICIAN GONE MISSING," possibly hinting at his social media silence this year.

Regardless of what's to come, his girlfriend is already proud of him. Cabello supported Mendes' new album on Instagram, calling it a "gorgeous gift" that fans need at this moment. "The world could use some magic, beauty, and Wonder always, but especially right now," she wrote. "He’s crafted this album with every last bit of his soul, his spirit, and his essence with the purest of intentions. My love, I’m so proud of the person you are and I’m so excited for people to see and hear your heart."