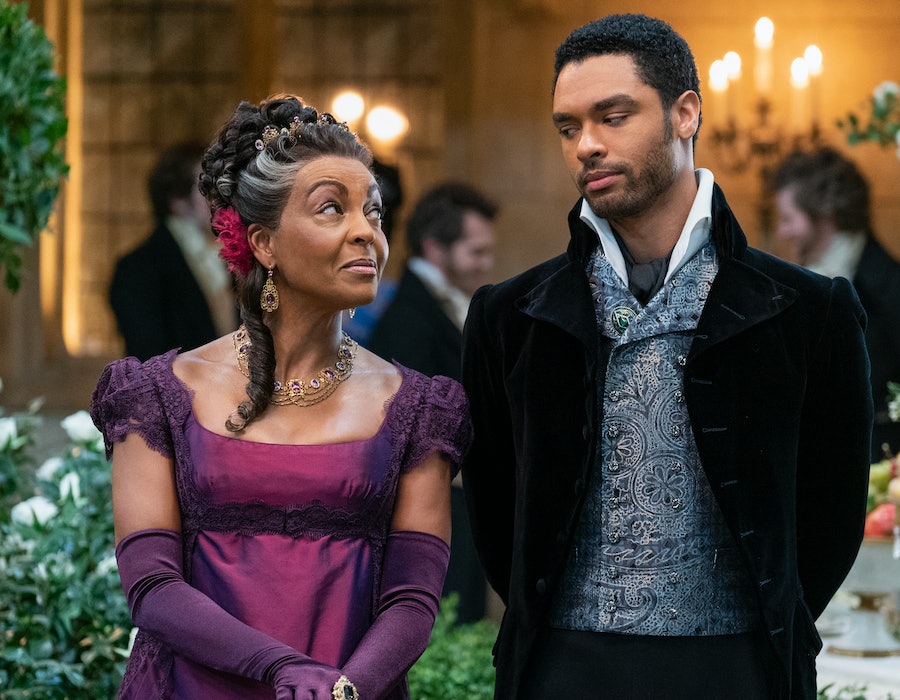 Never let it be said that period pieces can't be inclusive — even if most of the ones you watch suggest otherwise. Photos from Shondaland's new Netflix show Bridgerton proves that diverse period dramas can exist, especially in the world of TV super-producer Shonda Rhimes. Executive produced by Rhimes and created by her longtime collaborator Chris Van Dusen, Bridgerton marks the first show that will be released under Rhimes' $150 million deal with Netflix.

The new show takes place during England's regency era in the early 1800s and focuses on the Bridgerton family, specifically on eldest daughter Daphne (Phoebe Dynevor), who is seeking the right man to marry on the London society circuit, where, shockingly, not everyone is white. Her older brother begins to rule out her potential suitors for her, but the mysterious Lady Whistledown, voiced by the incomparable Julie Andrews, has other plans. Enter the Duke of Hastings Simon Basset (Regé-Jean Page), the apple of every debutante's eyes — except Daphne, who's seemingly repulsed by his rebellious nature. But as with all good true love stories, their natural attraction and ability to outwit each other just might trump everything they once thought about each other.

Netflix release the first Bridgerton photos on Thursday, Oct. 14, teasing a show about romance, family, and scandal, along with gorgeous regency costumes, of course.

Bridgerton was based on Julia Quinn's series of novels of the same name, and while the author admitted the show wasn't a straight adaptation of her books, she said she was "blown away" by the results nonetheless. "It's so good," she told Entertainment Weekly about the show in April. "It's not a word-for-word adaptation, and it shouldn't be. They're interweaving a few new stories and different stories, but the heart of this season is the story of The Duke and I and how they did it and how they structured it, is just brilliant."

All eight episodes of Bridgerton will premiere on Netflix on Dec. 25.