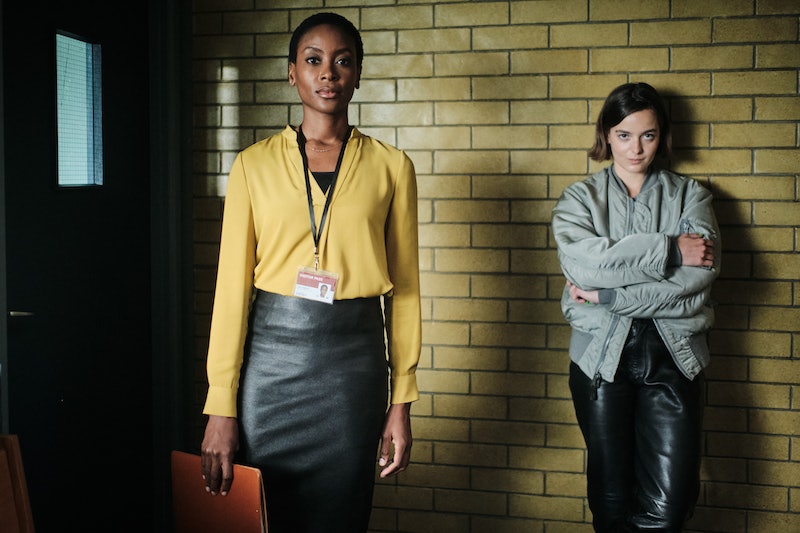 It takes a lot for a show to be called the next Bodyguard. But when the show’s producers team up with the producers from Line of Duty, I'd say it's a fair comparison. Cue Showtrial, a five-part BBC crime drama that follows a fictional court case as it swirls into a media storm. Set in and outside the courtroom, the series will have viewers questioning their understanding of innocence and guilty.

Demonstrating how the public's opinion can drastically change the outcome of a criminal's trial, Showtrial could easily be a reconstruction of dozens of crimes committed in the UK. Instead, the series follows the fictional case of Talitha Campbell, an entrepreneur's daughter who is arrested after being connected to the disappearance of student Hannah Ellis, who is one of her classmates.

What’s The Plot Of Showtrial?

Showtrial follows the fictional case of Talitha Campbell, the daughter of a wealthy entrepeneur who finds herself charged with conspiracy to murder student Hannah Ellis, one of her classmates at university.

On the night of Talitha’s arrest, duty solicitor Cleo Roberts is given the task of proving her innocence. Talitha requests that Cleo continues to represent her in the trial and make her defence against the prosecution who are “weaponising” the teen’s gender and social privilege against her.

“The right to a fair trial and the idea of reasonable doubt lie at the heart of a civilised society,” creator and writer Ben Richards told BBC One. “Showtrial explores how they can be distorted by other factors, in a world where concepts such as fairness, doubt and reason are afforded such diminishing value.”

Who’s In The Cast Of Showtrial?

When Will Showtrial Be Released?

BBC have yet to reveal a release date, but filming started in April 2021 so that suggests we can expect to see Showtrial at the end of this year or early in 2022.

What Else Do You Need To Know About Showtrial?

The series is set in Bristol and, according to Bristol 247, it was filmed on “purpose-built sets” at The Bottle Yard Studios and on location in and around the city.

More like this
A New Netflix Doc Will Explore The Unsolved Murder Of Jill Dando
By Sam Ramsden
This First Look At 'The Gold' Shows Jack Lowden In A Whole New Light
By El Hunt and Sam Ramsden
Twitter Is Burning As Phoebe Dynevor Reveals Daphne’s 'Bridgerton' Exit
By Sophie McEvoy
Helena Bonham Carter Doesn't Think 'The Crown' “Should Carry On"
By Sam Ramsden
Get The Very Best Of Bustle/UK
Sign up for Bustle UK's twice-weekly newsletter, featuring the latest must-watch TV, moving personal stories, and expert advice on the hottest viral buys.