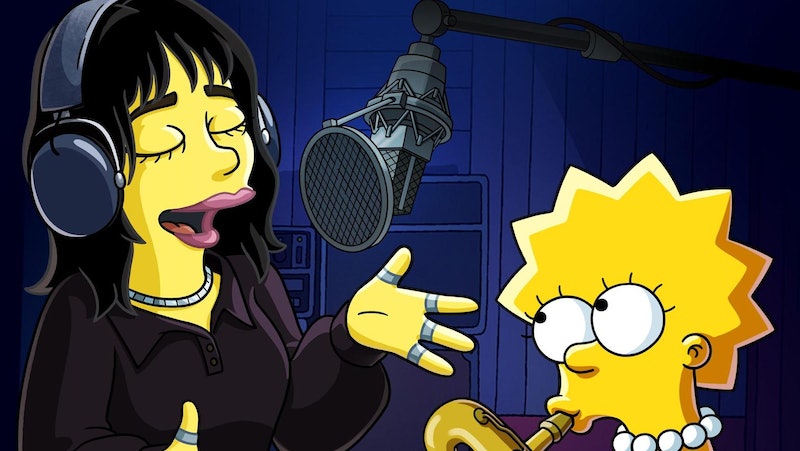 On April 22, Disney+ dropped an animated short titled The Simpsons: When Billie Met Lisa. It’s exactly what you’d expect from the title: a quick little comedy that shows what went down when Billie Eilish and her brother Finneas O’Connell stumble upon Lisa Simpson, who was just looking for a quiet place to practice her saxophone. The GRAMMY Award winners are totally blown away by Lisa’s musical skills, and decide to stick around for a jam session with the oldest Simpson child (who Billie jokes is even younger than her). It is absolutely worth the watch. Check out a trailer for the short, below.

When Billie Met Lisa is the fourth installment in a collection of animated shorts available exclusively on Disney+. There’s Maggie Simpson in The Force Awakens from Its Nap, which is Star Wars themed. There’s also a Marvel-themed episode called The Good, The Bart, and The Loki, and The Simpsons in Plusaversary is the short that was released in celebration of Disney+ Day in November.

More like this
Marvel's 'She-Hulk' Trailer Is Finally Here & The Hulk Lends A Big Helping Hand
By Grace Wehniainen
Hilary Duff Spills The Tea On Why Disney+ Canceled The 'Lizzie McGuire' Reboot
By Jake Viswanath
The 'Thor: Love and Thunder' Trailer Finally Shows Christian Bale As Villain Gorr
By Grace Wehniainen
The 'Hocus Pocus' Sequel Finally Has A Release Date & It Makes Total Sense
By Shannon Barbour and Radhika Menon
Get Even More From Bustle — Sign Up For The Newsletter