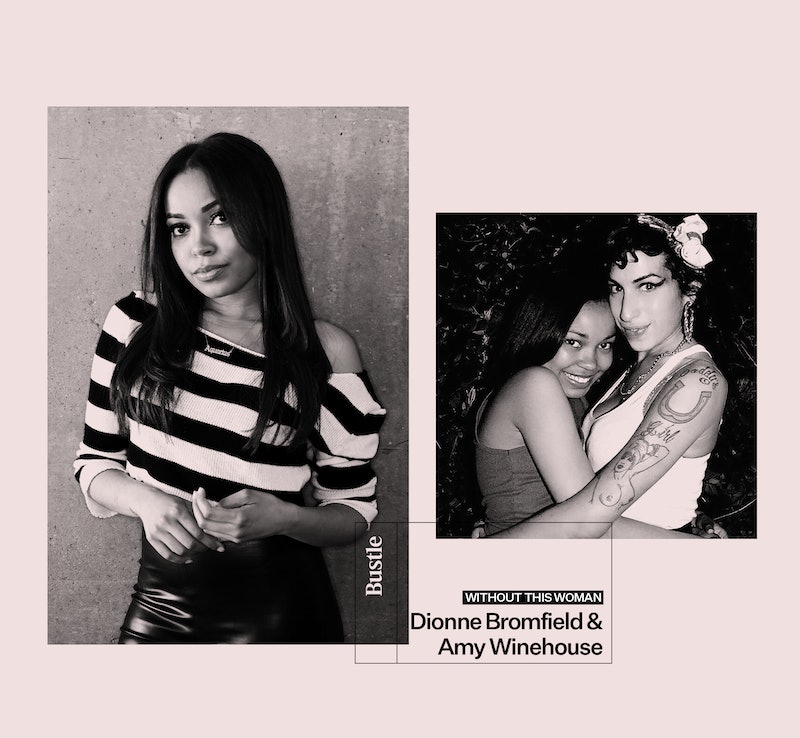 Dionne Bromfield
Without This Woman

Bustle's "Without This Woman" is a series of essays honouring the women who change — and challenge — us every day. Below, singer-songwriter Dionne Bromfield opens up about her godmother and music mentor, Amy Winehouse, 10 years after her death. Their relationship is the topic of Bromfield’s new documentary, Amy Winehouse and Me: Dionne’s Story, available to watch via MTV UK.

I first met Amy Winehouse when I was very young, about six or seven. Even from the beginning I remember her as being very motherly. We shared a very close and unique bond: I was lucky to see her maternal side and to bond with her musically. She was like my big sister and second mother.

I have so many fond childhood memories of Amy. She used to love pampering me, and would do my hair, pluck my eyebrows, give me mini facials. She loved doing that beauty work.

As a godmother, she was much like a friend, I could say things to her that I probably would never have told my own mother. I knew I could turn to Amy for advice about let’s say, a guy, and she’d go, “Oh, you fancy him!” But she’d also point me in the right direction, if I needed that. We spoke and saw each other weekly, even over Skype. Sometimes, she’d call me just to tell me about the most random things that had happened to her that day.

Growing up, 60s music was always playing around the house, so I naturally took a liking to it. I was at Amy’s once, and I recognised the Martha & The Vandellas track playing in the background. Amy was like, “Oh, you like that music? You’re gonna love this stuff.” She introduced me to more 60s girl groups, and that was how our musical bond began. She would later ask me to listen to songs, and tell her three things I loved about them — it became our little project. She could see I was soaking everything up, and she liked teaching me. I was learning from the best.

Amy really was my biggest supporter, other than my mum. She encouraged me to go to theatre school. She took me to studios, she let me use her band, she taught me about things that she had experience in musically, and I could always confide in her about my career. Not many people have such opportunities. I remember her telling me, “I’m going to sign you one day.” At that point, I didn’t even know what the hell that meant. A year later, I was sat in an office, trying to work out my signature for the contract. She was the driving force behind where I am now.

Her last public appearance was at the Roundhouse in Camden in 2011, when she made a surprise appearance on my set. Someone had told me Amy was coming, and it was walking distance from her home, but I wasn’t certain if she would. I was singing “Mama Said”, and I saw her signalling to me to come offstage. “I want to come out and join you,” she told me. And she did. I introduced her and we danced while I sang and she backed me. We had a really great time.

Following her death, I felt really guarded. I thought I was handling it well, but I think a lot of people could see I had become less happy, and less carefree. In the last couple of months, I’ve been much more open, and I’ve being talking to people about it. It felt next to impossible then, but I feel much lighter now.

I used to avoid meeting fans who would tell me how much they loved Amy, because it was really difficult. But now, I’m actually so glad that people are still remembering her a decade later. Amy has that effect on people, she deserves to be appreciated and loved still.

She inspires me daily. Amy’s biggest piece of advice to me was to be true to myself, and to trust my gut instincts. If something doesn’t feel right, don’t do it. Musically and personally. That advice follows me still, all the time.

Last year, I was thinking about Amy more than ever. I felt there was a lot I wanted to address. I wanted to show the side of Amy that I knew, and the documentary is one of the best things I’ve done. There are a lot of pictures and videos that have never been seen before, and people will get to see a side to her that was never shown to the public, but that isn’t new to her family and friends.

People saw Amy as this larger than life character. But really, she was just a loving, caring, normal girl. She was the kind of person that would do anything for you if she believed in you. I really want people to see the Amy that I knew, and to see how great of a person she was.

As told to Kay Leong. This interview has been condensed and edited for clarity.

More like this
Theo James Would “Love” To Star In George Michael Biopic
By Sam Ramsden
A New Netflix Doc Will Explore The Unsolved Murder Of Jill Dando
By Sam Ramsden
You’ll Definitely Recognise The Stars Of Amy Winehouse’s Biopic
By Maxine Harrison
Barney Walsh Has Been Linked With This Famous Miss World Winner
By Sophie McEvoy
Get The Very Best Of Bustle/UK
Sign up for Bustle UK's twice-weekly newsletter, featuring the latest must-watch TV, moving personal stories, and expert advice on the hottest viral buys.