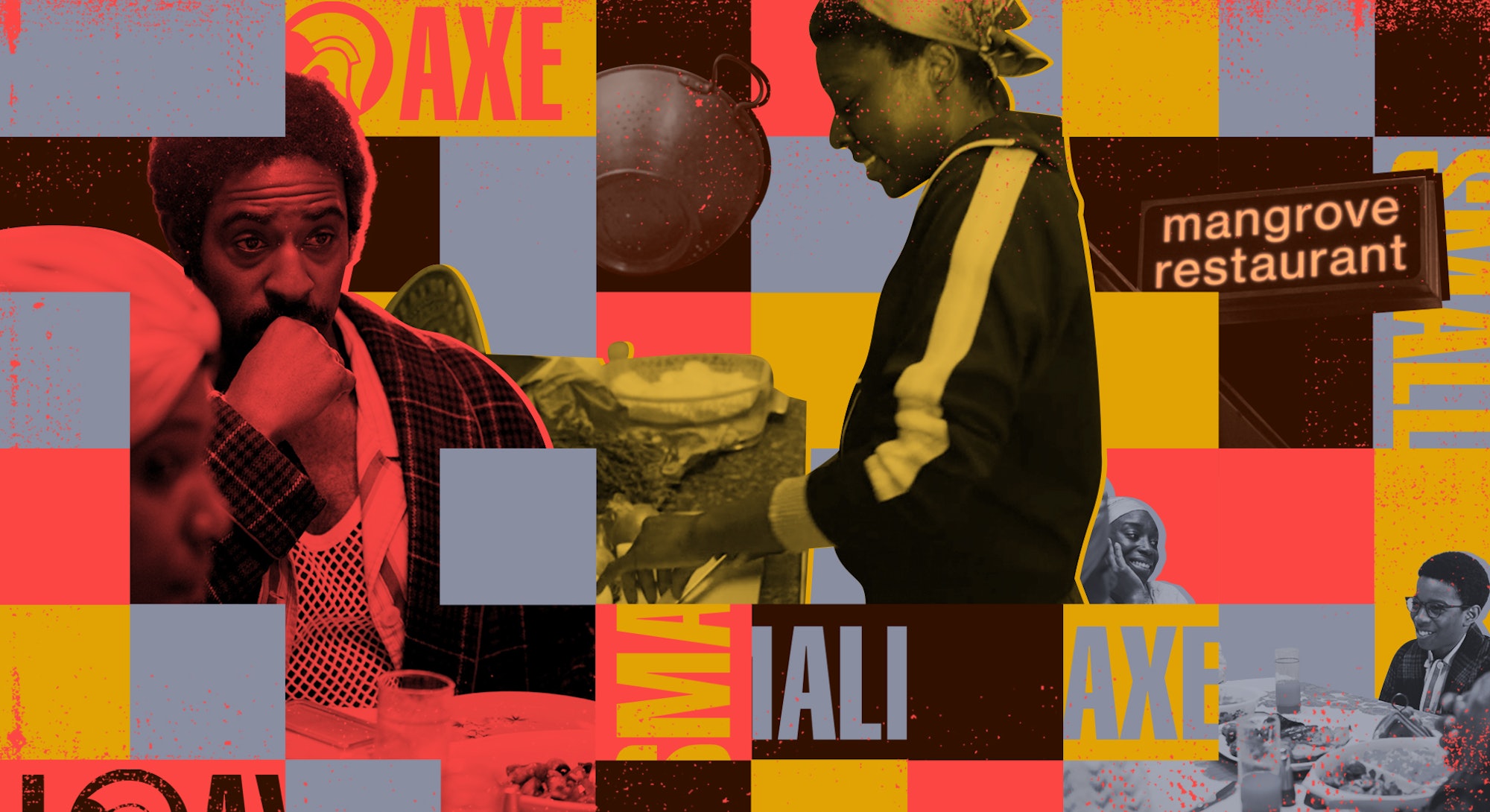 Steve McQueen’s Small Axe series begins with the story of the Mangrove, a small Caribbean restaurant in Notting Hill owned by Frank Crichlow, who was a victim of continued police harassment and antagonism throughout the late '60s and '70s.

Described by food writer Riaz Phillips as a “crucible of resistance”, the Mangrove was at the centre of the UK civil rights movement, becoming a community hub of sorts for writers, activists, and even international musicians such as Bob Marley, Nina Simone and Jimi Hendrix. It was also a first stop for those who had "jus reach" London and needed a place that felt like home.

The Mangrove was a key inspiration for my social enterprise sisterwoman vegan. Exploring wellness through food, we use it as a medium to build community with cooking lessons, supper clubs, and a reading group. My initial ambition was to “feed the activists and the art hoes,” a tongue in cheek, millennial interpretation of Crichlow’s work.

My interest in food and politics was cultivated early. Growing up just minutes away from the Mangrove restaurant in Ladbroke Grove, I was fortunate enough to have been taught the story of the Mangrove Nine by my dad, who showed me the Franco Rosso and John La Rose documentary detailing the trial.

However, the response to the series has made it apparent that very few people of my generation were aware of the Mangrove’s existence prior to McQueen’s release. This is not due to apathy or lack of interest. Despite having a month annually ‘dedicated’ to Black History, so often school curriculums only focus on America and the Transatlantic Slave Trade. This intentionally ignores and attempts to absolve Britain’s violent history against Black people, as well as disempowering Black people by denying and suppressing the truth of how we navigated, fought against, and survived these times. We deserve to know the stories of the people who came before us. White people also need to be made aware of the unsanitised and unfiltered truth of the racism in Britain and the institutional and systemic violence that still continues to this day.

In Lovers Rock the women gather together in the kitchen, singing along to Janet Kay’s Silly Games as they rinse fresh callaloo, roll dumplings and pick thyme.

The first thing I wanted to do after watching Mangrove was head straight to the Black Cultural Archives to find out everything there was to know about its chef, Elizabeth ‘Betty’ Crichlow. So often Black women and their stories, particularly those in domestic roles, are left forgotten, their contributions disregarded. Even if Betty “make the best roti,” she was still just the chef. Did she really exist? What inspired her recipes? What role did she see for herself within the movement? Was she aware that she was nourishing spirits as well as bodies? Food can be an incredible anthropological tool; what could a menu from the Mangrove, for example, tell us about the lives of Black people and their realities of being and living together just a few short years after the UK’s Race Relations Act?

Food is a subtle yet significant motif throughout the Small Axe series: familiar, comforting, and nostalgic. In Lovers Rock the women gather together in the kitchen, singing along to Janet Kay’s "Silly Games" as they rinse fresh callaloo, roll dumplings and pick thyme. Dutchies bubble on the stovetop, filled to the brim with rice n peas, curry goat and ackee and saltfish, the camera zooming in on the stirring of the pot, the pleasing squelch as spoon meets sauce. A brief, sumptuous moment of mundanity and platonic intimacy before the real night begins.

Meanwhile, in Red, White and Blue, uncomfortable family moments are offset as the camera pans the table, showing us their Sunday dinner of chicken, rice n peas, and plantin. The contrast between the vibrancy of the food and the obvious tension in the room highlights the importance of ritual, family and keeping up appearances to the Caribbean community; not much can ruin a West Indian Sunday dinner, not even your son joining the police force (God forbid!).

This is echoed in Education, the last episode of the series, with Kingsley’s mother quelling an impending argument with “it’s Sunday, and we’re at the table." Red, White and Blue also reveals the way to get on a West Indian elder’s good side — complimenting their food, with the words “The rice n peas lovely, Ms Jesse”, and “I love the sweetness of your chicken” momentarily thawing the ice.

In Alex Wheatle, we laugh as Dennis laments the lack of chicken on his plate, kissing his teeth as he realises the other men were given two pieces to his one. We shake our heads at Alex’s hesitance to add spice to his food and his frenzied eating, shovelling and swallowing the contents of his plate without chewing. “The food nuh have no legs, ya mother nuh cook for ya?” Dennis' mother admonishes. In Caribbean households, dinner times are events, things to take time over, moments to share in. Alex’s rushing implies that his experiences of mealtimes are in heavy contrast to the loving space he now finds himself in, reminding us of the violence of his upbringing.

At Saturday school in Education, Kingsley and his sister are coaxed in with promises of breakfast. As the benevolent matriarch Tabitha uses the remains of breakfast to demonstrate a maths problem, Kingsley’s relief, joy, and feelings of belonging are amplified as his intelligence is affirmed by his community. The breakfast table is the community’s love made material, a symbol of the nourishment, comfort and support that community brings.

McQueen’s Small Axe series shows us that food is resistance, food is love, food is joy, food runs throughout, and cannot be removed from our experiences as Black people. Food serves as the backdrop to our collective experience as Black communities, a thread that links us all through times of subjugation and times of resistance, connecting us together and to Africa and to the rich, abundant food histories of our ancestors.

Food is by no means a new space of resistance. In the ‘60s and ‘70s, The Black Panthers’ Free Breakfast Program fed over 10,000 children a day at its busiest and was a vital part of their organising work. Its legacy can be seen in Marcus Rashford’s efforts this year to hold the government to account about child food poverty and galvanise the community with his free school meals campaign. You simply cannot tell Black stories without making some reference to what is on our plates.

But more investment needs to be made into Black food businesses and Black centred community spaces so that we can give ourselves the community, togetherness and nourishment needed to survive and thrive.

McQueen’s Small Axe series shows us that food is resistance, food is love, food is joy, food runs throughout and cannot be removed from our experiences as Black people.

Notting Hill, where the Mangrove was located, has been long past gentrified and despite a large West Indian community still living in the area, our legacies have been very much wiped away. In recent years, one of the only places serving ‘West Indian food’ in W10 has been Boom Burger, a Jamaican- inspired burger bar run by a white twenty-something that had a brief stint under the Westway serving "jerk burgers" and sweet potato fries. Rum Kitchen took over the site where the Mangrove once stood, and there’s a Cottons in Notting Hill Gate, but for the real deal, we have had to go north to Harlesden or south to Shepherd’s Bush and make pilgrimages to Brixton at the weekend. You can (almost) be forgiven for downplaying Notting Hill’s significance to the culture when the stories and institutions are so hidden or no longer exist.

The exception is, of course, Notting Hill Carnival, which was (heartbreakingly, but rightfully) cancelled this year due to COVID-19. Despite being treasured by many (with over a million attendees across the two days), it is highly policed, and faces annual pressure and criticism over sensationalised crime figures. It also battles threats of removal from the community and into Hyde Park, for a ticketed event. How fitting that the only other time in its history Carnival has been cancelled was the similarly tumultuous year of 1970, amidst the very same protests and violence depicted in McQueen’s Mangrove.

London as a whole has very few authentic West Indian restaurants in which you can sit down and eat together. This is the legacy of sustained campaigns of violence and harassment against Black businesses (such as those depicted in McQueen’s Mangrove), and a result of the nature of commercial property rates in London. Despite Caribbean takeaways and other Black food businesses adding immense value to London’s food culture, Black food businesses can often be priced out of creating permanent spaces for ourselves.

Boom Burger was actually a vibe, but why is it so much more difficult for Black business owners and Black community leaders to receive the support, funding and information needed to create similar spaces? I was very lucky to receive support from Impact Hub and Fish Tank for my venture, but opportunities are few and far between.

The Mangrove was a space that centred Black community and resistance, Black creatives, activists and intellectuals, and Black joy. Alongside my enterprise sisterwoman vegan, below are some of my favourite current Black-run projects and businesses that are using food to build community:

Run by Nigerian sibling duo Ife and Emika this North London restaurant’s ethos of “Chop, Chat, Chill” echoes the community feel of the Mangrove, plus its plantain waffles are to die for.

This aptly named Peckham eatery has a menu inspired by Caribbean and South American flavours and has a room upstairs you can hire for reading groups, workshops, meetings and screenings.

Island Social Club, a restaurant and bar in Haggerston, connects people to British Caribbean culture and builds bridges inside and outside the community.

A culinary collective of Black chefs and artists investing in the Black community.

Written by Riaz Phillips, Belly Full is an incredible love letter to the legacy of Black Caribbean food culture in the UK, documenting Caribbean eateries and sharing their stories, and is a must read for those wanting to delve deeper into these histories.

And if you’re looking for support for your own community project, check out the Black Land and Spatial Justice Fund organised by Amahra Spence, founder of the MAIA Group, which is attempting to bridge the resource gap.