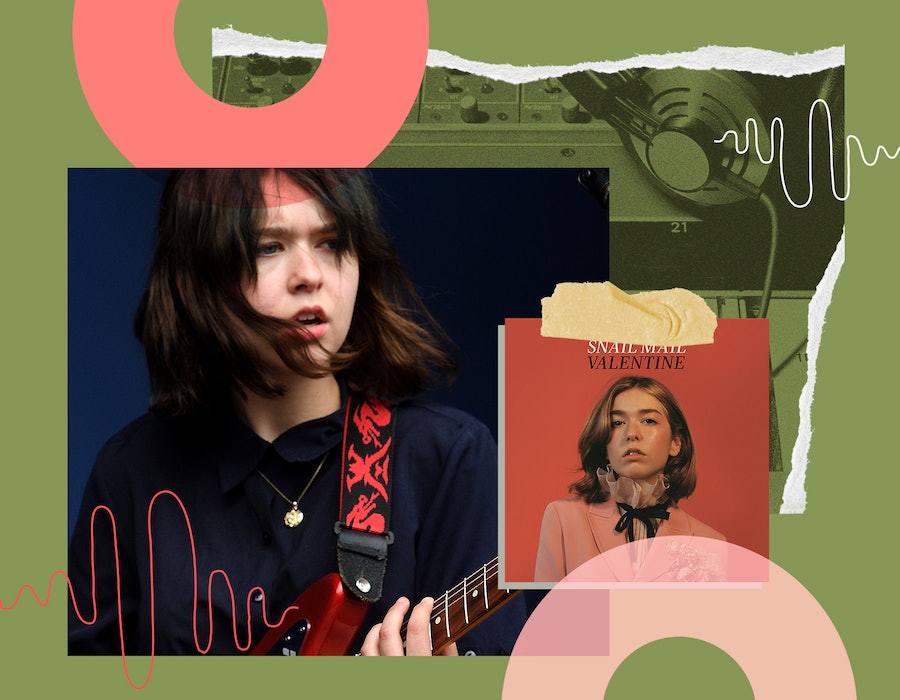 After seeing Lindsay Lohan’s fictional band Pink Slip take the stage in the 2003 remake of Freaky Friday, 7-year-old Lindsey Jordan picked up her first electric guitar and started shredding. Her first shows were open mics at the sports bar next to her mother’s underwear shop in Maryland. “I was eight or nine when I was playing [those bar shows] — my mom had a friend’s band I used to sit in with and then I did my own cover sets,” Jordan tells Bustle. “Adults around me were always like, ‘You're gonna be huge,’ and I just never felt that way.”

By 15, she was already touring as Snail Mail, her critically acclaimed indie rock project. When her debut LP, Lush, came out in 2018, it launched her into the stratosphere. She was hailed as an indie prodigy, a guitar virtuoso, the Gen Z Liz Phair. But after three years of nonstop touring, the life of a successful musician started to feel out of control for the then-18-year-old. Writing a sophomore album, one that required introspection and careful thought, was simply not in the cards. “It just felt like those genuine moments of privacy and intimacy were actually really hard to come by,” says Jordan. “It’s a weird thing trying to just have your career life not harm anything in your personal life.”

So Jordan stopped touring, went to rehab, deleted social media, and eventually ended up back on the floor of her childhood bedroom finally working on her second album, Valentine. Though it was created in a period of quiet contemplation, the record is by no means soft-spoken.

Now 22, Jordan’s voice has matured into something sublime, both raspy and bright, powerful yet heartbreakingly delicate. The first single, “Valentine,” is filled with dramatic crescendos and a yearning so intense it makes your stomach do flips. If Lush was about teenage crushes and growing up, Valentine is about what happens after those relationships come to fruition and you mess them up. Listening to Snail Mail makes the prospect of picking up the pieces feel less lonely.

“There’s something really heartbreaking and also beautiful about being in a human relationship. You discover that relationships are super ugly and real love and loss is ugly,” says Jordan. “It’s never like how it is dreaming about it — it’s different, and I think I’m not necessarily dissatisfied with that, just taken aback by it.”

Jordan has found solace in the fact that she didn’t have to get it all right — love, fame, relationships, indie rock success — the first time. “It’s always a process,” she says. One that ultimately allowed her to chronicle her missteps on Valentine.

Below, Jordan muses on falling in love, dealing with fame, and her favorite unreleased song.

On The Stress Of Getting Indie Rock Famous & Unhealthy Crushes

After the success of Lush, how have you coped with the very unnatural influx of attention that fame often brings?

It's a weird ongoing process of trying to figure out how to feel about it in a way that is healthy. I think looking [at] yourself through other people’s lenses is really counterintuitive to anything good and original, in my opinion. I’m off Instagram. Somebody runs it for me because A) I don't want to see people being mean and B) I definitely don't want to see too much good stuff or comparisons and opinions. Because in my mind, making Lush, for example, which was kind of the same [process] as Valentine, I’m shutting myself out from the world when I do it. I want to be closer to my intuition, and other people's opinions being in the fold — whether they be good or bad — stresses me out and brings me further away from my original thought. I need to be true to myself and what I want to do.

I had never heard of Pavement when Lush came out. Having all these ‘90s comparisons was super flattering — I love music from the ‘90s, I love Nirvana, and Elliot Smith, and Oasis — but I didn't think that was what I was going for. I thought I was just writing original music.

Valentine makes some fun new musical choices. Were you nervous to debut a different sound?

I was so scared to put out “Ben Franklin.” I was like: “This is fire. I love this song,” ‘cause it’s one of my favorite things I've ever written. But I was like, are people gonna be mad that [my sound is] changing? Being scared to put out something that you’re proud of sucks. There was apprehension where there shouldn't be any. I just try to stay as tuned out as possible, ‘cause my brain is already so busy already. I love my job, and I just want to do everything that I can to protect the integrity of what makes it special to me, and it's really hard for me when I'm self-conscious about people being upset.

A lyric that I keep coming back to off “Valentine” is, “F*ck being remembered, I think I was made for you.” Where you are at now in the realm of romance, a few years out from Lush? What do those lyrics mean to you?

No one has told me that they liked that line, and that's like one of my favorites on the record and on the song. That lyric just really speaks to me. I’m writing about a relationship and there’s a lot of references to getting privacy, whether it be for the person I’m singing about in the situation or my own privacy. I think a misconception is a lot of people have asked if I’m singing about indie fame being difficult, which I’m actually not [doing] at any point, really. I kind of touch on being on tour and stuff but when I’m talking about parasitic cameras, it’s about the relationship moreso.

I had a lot of moments where I’m talking about getting privacy with this person that I’m singing about, or with the people I’m singing about, because in the world that I live in at least, and I think the world a lot of people live in, the real intimacy comes with the privacy, having things that you keep to yourself that aren’t for display. Like not posting a picture of the person that you’re dating, posting on Instagram to look hot together and be like, “Look who I’m seeing,” “Look, I’m happy,” “Look, I’m healthy.” All that stuff just gets you further away from actual intimacy. I think that I was feeling it heavily on tour... Your personal life becomes so precious. You don’t want people to have opinions on it, and you don’t want people to comment on it, and you don’t want drama. You just want it to be like watching a movie on the couch and nobody else having anything to do with it, you know what I mean?

You’ve always written about love in various forms. What about this sensation of longing, lovesickness, and adoration fascinates you? Why do you keep coming back to those feelings?

The record is summed up I think by being about real experiences of love and loss, which kind of got touched on Lush in its own way. Lush is very much about the prospect of amazing things and dreaming about things and being sad they’re not happening ‘cause you’re 16. It’s the beauty of a crush that doesn’t get returned. I think if you take that same mindset of how beautiful it is to yearn for somebody that you can’t have, eventually you will get the things that you want, and then you’re stuck with a complex that is unhealthy, like worshipping and wanting to adore, wanting to just be in love with somebody and not look at them as a person. On [Valentine], there’s lots of moments where [love] is expressed differently, like love is expressed between a person and a person, not a person and a concept.

Are you good at being in love? Do you find it comes to you naturally, or does it feel like something you’ve had to figure out and learn?

I learned. Maybe now I’m better at love but maybe not. But no, it’s definitely not natural for me. I live a life that is generally self-serving. I have a career where you have to be self-serving or you’ll feel like sh*t, you have to believe in yourself, you have to make sacrifices. I spend all the rest of my time trying to compensate for that with myself, so you know, that is something I try to be very cognizant about, is the fact that I’m always gone [touring], my career is selfish, and learning that if you're gonna have that, your person has to be really fantastic. That’s something that I really learned, that taught me to be better at love. I think it’s really all about self-awareness at the end of the day, and knowing what you want and what you need.

Is there a moment that you felt like you really “made it” as a musician?

Right around the end of high school, we had a lot of interest from labels and managers. I was going to college, I was pretty sure, I had already gotten down to the ones I wanted and I had already applied and gotten in and I was trying to figure out what was up with that. I guess having all that buzz definitely makes you put everything into perspective. All the people around me were like, “You can't go to college right now because why would you? Clearly this is a big deal,” and I just, took a lot of, I don't know, I took all the meetings and ate all the free food and got all those free drinks — not drinks drinks — and just eventually was kind of like, “Oh yeah, there's a fight over Snail Mail... cool.” I remember deciding, “I guess I shouldn't go to college because there's a bidding war [over signing me].” That was pretty cool.

What what the first CD you ever bought?

I think it was a CD of So Wrong, It’s Right by All Time Low.

Yeah, I will do “Dancing in the Dark” by Bruce Springsteen or “Total Eclipse of the Heart” or “Come On Eileen.”

Is there a band or an artist that you love that people would think is totally out of character for you?

Maybe the ferocity [that] I love The 1975 [with] would surprise people. I love that band. I just think they're good, they’re really good. There’s just so much of it that I really really like. I just love well made pop music and I think they’re sick.

What’s the weirdest thing you’ve ever written a song about?

Me and my friend wrote a song about getting cucked one time and it’s actually really good. I don’t know if it will ever come out. There is something about just having a dude steal your girlfriend. The song’s really funny, and I don’t usually mess around with funny lyrical content, but we did and the song is good.