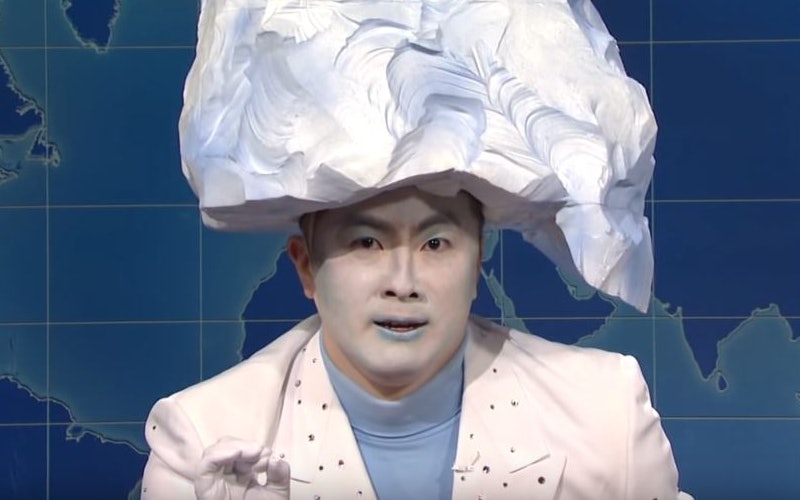 Saturday Night Live brought a new perspective to an old tragedy on April 10. The SNL episode featured “the Iceberg that sank the Titanic,” and Bowen Yang’s icy and hilarious character was more than just a hunk of frozen water. Although Weekend Update co-host Colin Jost tried to steer the conversation to that fateful April night almost 109 years ago, the Iceberg wouldn’t let himself be painted as the villain.

Yang’s character was visibly uncomfortable from the moment Jost introduced his infamous ties to the ill-fated ship. Acknowledging right off the bat that it’s “always a really weird time of year” for him, the Iceberg quickly tried to move on, letting the co-anchor know that he’s “done a lot of reflecting to try and move past it.” When that didn’t work, the Iceberg flat-out informed Jost and viewers that these weren’t “the questions we discussed.” Apparently, the appearance wasn’t supposed to be about the sinking but rather the Iceberg’s new album, a “hyper-pop EDM new disco fantasia … called Music.”

The situation continued to simmer until it finally boiled over, and Yang’s Iceberg launched into an epic rant about what really happened, from his point of view. “OK, fine, you want to do this? Let’s do this,” the Iceberg began. “First of all, you came to where I live and you hit me. It was midnight, I was chilling, then I hear this Irish cacophony behind me. I mean, not to be offensive, but … like, I’m sorry, that’s what it sounded like. Like full Riverdance. And before I turn around and go like, ‘What?’ half my ass is gone! Which was my best feature and I’m literally injured but all anybody cares about is, like, 40 or 50 people died or whatever.”

The hilarious back-and-forth just got wilder. As Jost was quick to point out, the tragic incident actually resulted in the deaths of more like 1,500 people, but the Iceberg clearly wanted to downplay the tragedy — and barring that, at least place the blame elsewhere. “Why are you attacking me?!” the Iceberg asked. “You said you would be my Oprah, Colin.” The Iceberg went on to call out other contributing factors, from water (“They drowned, b*tch. That’s not me. That’s water.”) to the ship (“You built a bad boat!.”).

As the Iceberg had teased, there was a lot going on under the surface, and people loved it. Yang’s name began trending on Twitter after the sketch aired, with many fans calling out his stellar performance as the feisty block of ice. SNL writer Anna Brezen even shared that it was a “genuine stupid joy to write this impossibly stupid [bit]” and that Yang “is the Celine Dion of comedy.”

Thanks to performances like this, fans just want more from the comedian.

More like this
The Black Lotus Staff Has "Had Enough" In The 'White Lotus' Spoof From 'SNL'
By Brad Witter
Michael B. Jordan Tackled His "Public Breakup" With Lori Harvey On 'SNL'
By Brad Witter
'The Queen’s Gambit' Season 2 Tweet Wasn’t From Anya Taylor-Joy
By Mary Kate McGrath, Jack Irvin and Grace Wehniainen
Netflix Shut Down 'Bridgerton' S3 Rumours About A “Very Dark” Storyline
By Bustle
Get Even More From Bustle — Sign Up For The Newsletter
From hair trends to relationship advice, our daily newsletter has everything you need to sound like a person who’s on TikTok, even if you aren’t.