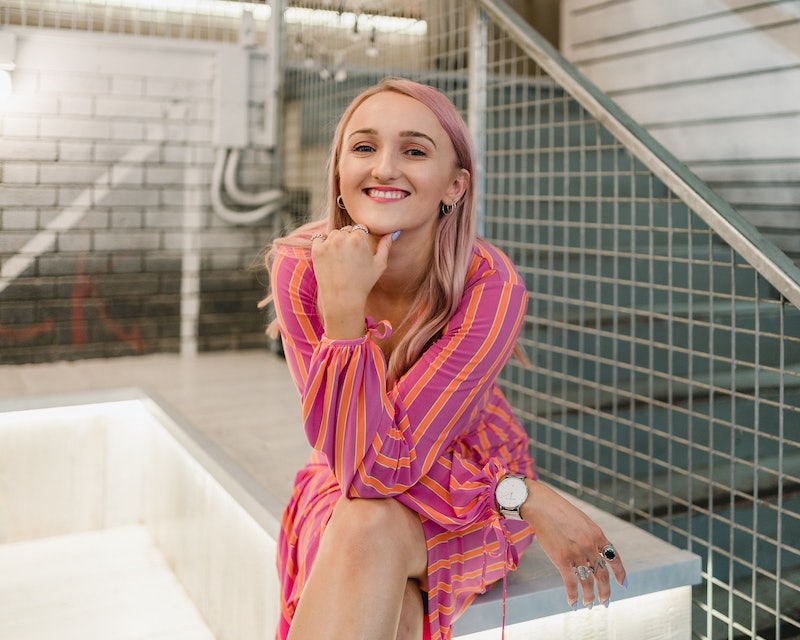 Back in 2018, Millie Gooch launched Sober Girl Society as a way to stay connected to likeminded individuals giving up booze for good. What started as a small but dedicated safe space has expanded to become a tool for more than 100,000 women looking to stay sober, share #QuitLit, and navigate fomo. Right now, on top of growing her Instagram empire and working with alcohol-alternative brands such as Nexba, Gooch is also enjoying the thrill of being a first-time author with her book The Sober Girl Society Handbook.

Gooch's debut book acts as a manual for sober and sober-curious females looking to improve their lives. The facts and figures she presents are astounding (for example, did you know the Scotch whisky industry produced 1.6 billion litres of waste liquids per year?), but it's her personal account – along with those from other members of the tee-total sisterhood – that delve deepest into the reasons for giving up alcohol.

My own journey with sobriety really began to take shape in 2018 when I finally walked into an Alcoholic Anonymous meeting. Both Millie and I agree that what keeps us away from alcohol is human connection: surrounding ourselves with sober sisters, listening to their experiences, and learning from their strength and hope. We both found our tribes, me through AA and Millie through the Sober Girl Society.

As someone who spent hours crossing out the word "God" in AA’s Big Book and adding an "S" in front of every "He," I considered myself a true 21st century addict. However, I still put my sobriety in the hands of older generations and traditions. Gooch, on the other hand, like a true millennial, went out and did it herself – she created a pretty-in-pink iteration of sobriety that’s easily digestible for Gen Z.

On Sober Girl Society, Gooch has also consciously removed words such as "addict" and "alcoholic" in an effort to create a space that's free from the stigma associated with them. This is one point where Gooch and I differ: I identify as an addict/alcoholic, while she utilises the label "sober" to explain her situation. When we jump on a Zoom call, I start by asking about this.

Mariella Agapiou: Let's talk about labels. You opt for the word 'sober' instead of 'alcoholic.' Can you tell me about that decision?

Millie Gooch: "I do feel there is a lot of stigma around it and I did worry that if I said, ‘I’m an alcoholic’, there would be negative reactions. All I really wanted to say was ‘I’m a non-drinker now.’ I only adopted the label sober because it gave more weight to it."

The stigma came from preconceived ideas from the media – a male over 40 on a park bench, and that’s what I thought an alcoholic looked like. That wasn’t me because I’m a binge drinker and I’m a party girl, and I just don’t know when to stop. I’m not against labels, and I have friends who label themselves as alcoholics, I just think everyone needs to do what’s right for them."

MA: With so many of us stuck at home right now, any form of dependency or mental health problem is really heightened, whether that’s disordered eating, anxiety, or drinking. For example, we know sales of alcohol have risen by a third during the pandemic. Tell me about the thought process that led you to stop drinking in the first place.

MG: "I tried everything: I tried only drinking spirits, not drinking wine. Moderation is really hard because of the way alcohol affects your prefrontal cortex – which is the rational decision part of your brain. Even if you say, 'I’m only going to have three,' once you have those three, your willpower and resolve is not the same as it was before you had them.

At the end of my drinking, I was having bad blackouts. I was in a shame cycle of doing stupid things, feeling really awful, beating myself up, and drinking to forget. It was taking a bad toll on my mental health. So, I woke up after one particularly bad night, didn’t remember anything, and thought, ‘I don’t want to do this anymore. I can’t.’

The first thing I did was read The Unexpected Joy of Getting Sober by Catherine Gray. However, when I got to about six months sober, I started to feel that pull back to alcohol and set up the Sober Girl Society because at the time, I didn’t know a single other person like me – especially one my age – who was a non-drinker.

MA: You quote Peter Klein in your book, saying he summed up one of the fundamental things you’ve learned through your journey with his line "good mental health comes from facing and getting through testing times without a drink to take the edge off." For me, getting sober meant anxiety attacks, but once I had ridden the wave, the clarity I felt was undeniable. What would you like people to truly understand about the relationship between drinking and anxiety?

MG: "Alcohol does affect you chemically to increase anxiety, it slows down your glutamate and then gives you a spike in everything the next day, making you more anxious. So, when I stopped drinking, there was almost an immediate relief of anxiety because I wasn’t putting myself in those dangerous situations.

I basically went through a mental breakdown when I was seven months sober because all of a sudden, I had all these feelings, all this overwhelm, and my body didn’t know how to manage because I had never processed my feelings without getting sh*tfaced. So, I went to therapy, and I had to work through a lot."

MA: Talk to me about spiritual wellness. In AA, we’re told to meditate daily. Do you take time to check in with yourself?

MG: "I’m not completely transformed spiritually, but I’m so much more open to things now. Whereas when I was drinking, I would have been totally sceptical of things and I feel I’ve become much more attune and present. I feel like I wasn’t really an active participant in my own life, I was either hungover, or drunk, or in a spiral of my own thoughts, and I’m so much more open now."

MA: You reference ladette culture and Sex and The City as reasons you began drinking excessively at university. Thankfully, cultural references to excessive drinking are becoming fewer and fewer and we have a sober movement on our hands. Why do you think the Gen Z are so focused on health and so many are labelling themselves as tee-total at such a young age?

MG: "I think it’s a mixture of things. They’re becoming more conscious of everything, and there is so much more information available to them in regard to their health and their mental health. But I do think social media has played a big part – it’s given us a view into the world and what we can achieve. And what’s more; there are so many more sober role models, celebrity-wise, influencer-wise, who are coming out and saying I don’t drink."