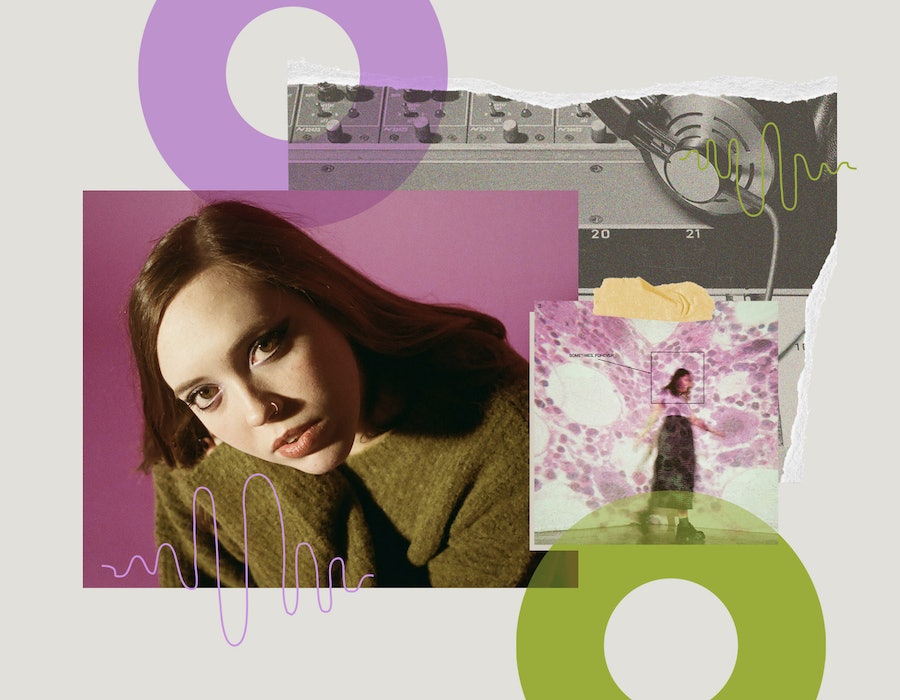 Sophie Allison rides for Buffy the Vampire Slayer. Literally: a sticker of the show’s logo is displayed on her pickup truck. “I've been [into it] since I was really young. But I also love The Vampire Diaries, the Winx Saga on Netflix, and I just started watching First Kill,” the 25-year-old musician tells Bustle. Lately, her love of the genre has been seeping into the themes of the ‘90s-inspired indie rock she makes under the name Soccer Mommy. “Everything gets more dramatic when you bring vampires in,” she says. “When I write something I use a lot of comparisons to evil, darkness, light, gore, and lots of stuff like that.”

Allison’s latest album, Sometimes, Forever, embodies all the heightened emotions of a vampire epic, exploring themes like depression, isolation, and loneliness. “It gets Halloween-y in there,” she says, noting that one song, “Darkness Forever,” came out of imagery that haunted her while writing the album. “I was having this strange fantasy of burning down my house to expel the demons,” she says. “Not that I was actually going to try to burn down my house, but I had this whole story in my head and ended up putting it into this kind of creepy song.”

Despite the darkness, the album is hopeful, too. “Some of it’s very heat wave, summery, and then some of it's more of a fall record,” says Allison, who likes to assign both seasons and colors — this one is purple, she says — to her albums. “Purple is such a great color because it can be kind of a creepy color, but it's also very pretty,” she adds. A little sinister, but nevertheless beautiful — just the way Allison likes it.

You often talk about your love of country music. Will we ever get a Soccer Mommy country album?

I don't know. Not that I wouldn't love to, I just don't think I could ever focus my attention completely away from the style that I already do. But I’m from Nashville and when I first started playing music, I was writing about wanting to be a cowgirl. I think it's just something that was in my life at a young age, and maybe influenced a bit of my style as I was growing up without realizing it. There’s even a country leaning song on this record.

Who are some of your favorite country artists you’re listening to now?

In high school, I shunned country music. But then I grew to love it. Now I love pop country, Luke Bryan and that kind of stuff. If we're talking stuff that I really admire musically, I love Emmylou Harris, Lucinda Williams, The Chicks. Alan Jackson I really like. I like a lot of the ‘90s country stuff.

Is there a band or musician people think is cheesy, but you absolutely love?

I do really like Van Halen. Obviously they're a well-liked band, but there are definitely some people that think they're a little poppy or cheesy. But I love that they're just party boys.

What Van Halen songs do you rock out to?

I don't know why I started listening to them again. It wasn't something I was totally raised on. “Women In Love,” just sounds so amazing and it's so vibe-y. “Dance the Night Away” is great. Van Halen II has a lot of really good stuff on it.

What’s one song you can never listen to again?

“Happy” by Pharrell. Something about it felt evil. Does that makes sense? It felt like a Josie and the Pussycats song where if it was said backwards, [you’d realize it was] brainwashing.

Who's your current musical idol?

I've been really obsessed with Emmylou Harris. I wouldn't always say idol for everyone that I'm listening to, but not only is the writing so great... like Quarter Moon in a Ten Cent Town, it sounds like a country record, but it has such a specific sound and production to it that makes it so different from a lot of stuff that was going on at that time.

What is it about this moment that’s drawing you to Emmylou?

It might just be the time of year. When it's starting to get warm and I’m driving around in my truck, I go through phases of music. A lot of times when I'm really enjoying just being outside in the sun, I listen to [Emmylou] or Lucinda Williams, something that's kind of country-leaning.

Do you have any go-to summer anthems?

It depends. There’s “Two More Bottles of Wine” by Emmylou Harris but then I also go really hard on the old pop R&B. I'll listen to a lot of Mariah Carey and Usher. I start throwing it back to my youth, the super lighthearted type of stuff.

... And The One Genre She Wished She Made Music In

If you weren’t making indie rock, what kind of music would you want to make?

Metal. I think that would be really fun.

Do you see yourself ever experimenting with that sound?

I don't think I could sing in a metal band. My voice is so soft. Even if it sounded good, I couldn't be loud enough on stage. So no, but I do think there's nothing like a really heavy guitar part. I like to get into it a little bit, sometimes, just for a second. Not fully metal, but get into a little bit of that doom-y feeling.

More like this
Who Is Camila Cabello Dating? She's Getting Cozy With Lox Club CEO Austin Kevitch
By Radhika Menon
Lauv Is No Stranger To Taylor Swift, Drake, Ed Sheeran, & Fame
By Alyssa Lapid
Beyoncé Sent Flowers To “Masterpiece Genius” Madonna After The “BREAK MY SOUL” Remix
By Grace Wehniainen
Someone Must Pay For What Happens To Bad Bunny In 'Bullet Train'
By Arya Roshanian
Get Even More From Bustle — Sign Up For The Newsletter