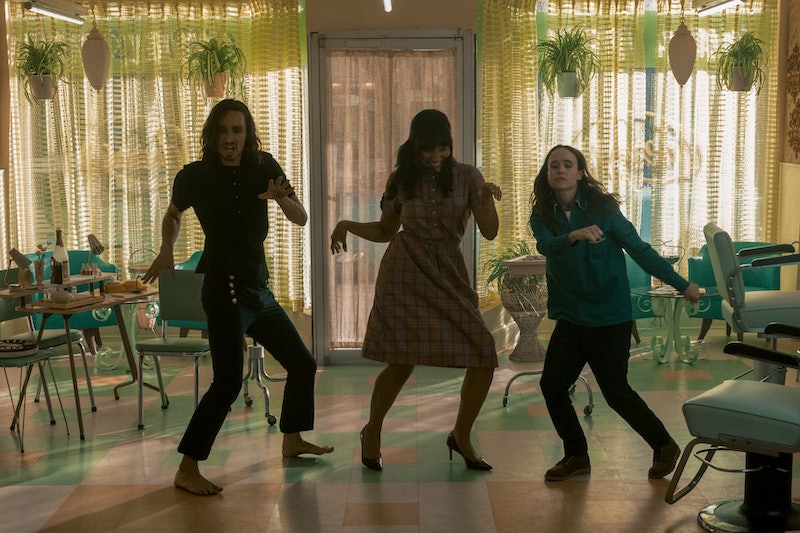 In Episode 7 of The Umbrella Academy's second season, Allison has a bloody face-off with the villainous Swedes while Klaus tries to wrestle Ben out of his body. Backstreet Boys' dance-y 1997 hit "Everybody" plays in the background, which shouldn't work, but oddly does. "Music is its own character on the show, and it's fun to counterpoint a song against a scene where they shouldn’t fit together but amazingly they do," showrunner Steve Blackman recently told Parade of the Umbrella Academy Season 2 soundtrack.

Though the second season finds the superhero siblings scattered throughout the 1960s, Blackman didn't mind including some anachronistic tunes. "There was talk about all the music being only '60s music, but I didn't want to limit that," Blackman added. "Music is timeless to me. If it’s the right song, it’s the right song."

In fact, there's some new music too. The Umbrella Academy Season 2 trailer includes a new song from My Chemical Romance's Gerard Way, who co-created the graphic novels the series is based on alongside artist Gabriel Ba. Way explained in a statement at the time that he was inspired to write the aptly titled track, "Here Comes the End," while the Netflix show was shooting its first season. "By the time I finished it 2020 was in full swing, the world had taken a profound turn, and the song was finished in a surreal new reality," he said.

From Frank Sinatra to Butthole Surfers, see every song in The Umbrella Academy Season 2 below.

Episode 1 — "Right Back Where We Started"

"Beyond the Sea" by Bobby Darin

"Right Back Where We Started" by Maxine Nightingale

"My Way" by Frank Sinatra

"You Must Be an Angel" by APM

"Forever and a Day" by APM

"I Wonder What the Future Holds for Me" by Glenn Snow

"Be Thankful You’re You" by Fern Jones

"You Only Want Me When You're Lonely" by Jim Boyd

"Take It All Off" by UPPM

"Jive Me Baby” by APM

"Who’s That Knocking" by The Genies

"I'm A Man (Single Version)" by The Spencer Davis Group

"I Gotta Get the World Off My Back" by APM

"I'll Never Do You Wrong" by Joe Tex

"Golden Brown" by The Stranglers

"Love Is Blue" by Marty Robbins

"Have You Ever Been Hurt" by Helen Wilson

"Unwind Yourself" by Marva Whitney

"I Was Made for Lovin' You" by KISS

"Love In the City" by APM

"He Can’t Love You" by Joe Hunter and Four Holidays

“We're on Top of the World" by APM

"Twistin' the Night Away" by Sam Cooke

"Won't Be Long" by Aretha Franklin

"I Live Alone" by Bob Cox

“In Hell I'll Be in Good Company” by The Dead South

"Give Me a Reason to Stay" by APM

"Sister of Pearl" by Baio

"Everybody (Backstreet's Back)" (Extended Version) by The Backstreet Boys

"Humors of Glen Dart" by APM

"Dark Rascal A" by APM

"Whiskey in the Jar" by APM

"Dancing with Myself" by Generation X

More like this
Woodstock Co-Founder Michael Lang Faced Several Lawsuits After The 1999 Festival
By Brad Witter
An Ultimate Guide To The Music Of 'Rap Sh!t'
By Brad Witter
HSMTMTS Season 3 Will Give Olivia Rodrigo’s Nini A “Proper Sendoff”
By Brad Witter
Netflix Just Revealed When 'Never Have I Ever' Seasons 3 Will Premiere
By Gretchen Smail and Alyssa Lapid
Get Even More From Bustle — Sign Up For The Newsletter