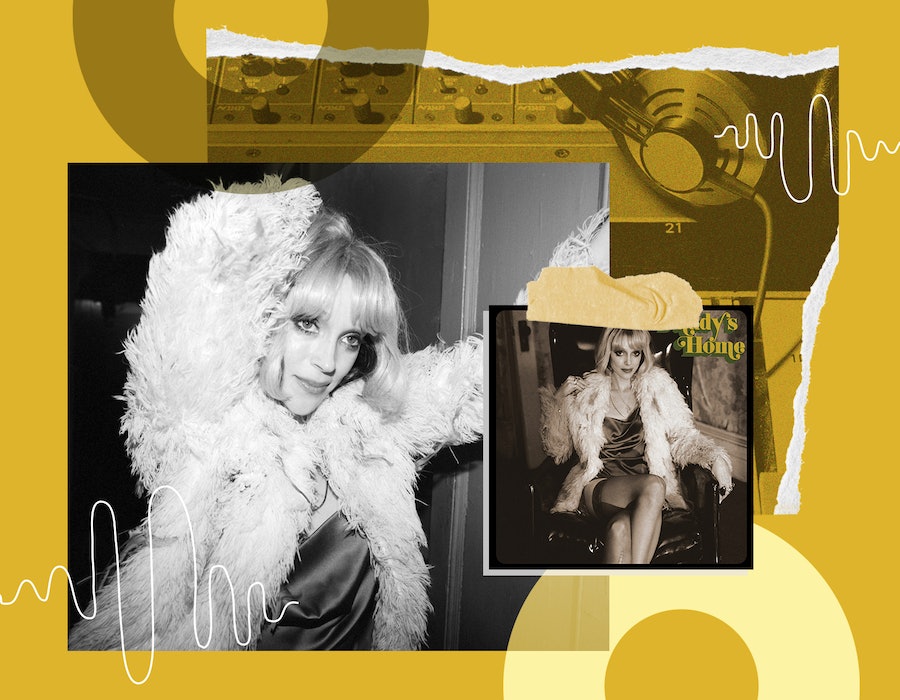 As St. Vincent was preparing to hone her aesthetic for her sixth studio album, Daddy’s Home, she turned to an oft-overlooked social media platform: Pinterest. The musician, whose given name is Annie Clark, had been crafting an audacious ’70s-driven, Funkadelic-inspired, new sound — and she needed a signature style to complete the transformation. “There was the cover of Super Fly. There was this great photo of Lauren Hutton in a vintage Mercedes with a hat on and a suit,” Clark tells Bustle of the images that comprised her Pinterest board. “There was Candy Darling just sitting in what looks like a photo studio with a fluffy thrift store jacket. And Gena Rowlands.”

Clark doesn’t pay tribute to pioneers of female liberation in ensemble alone — her song “The Melting of the Sun” directly honors women like Joni Mitchell, Nina Simone, Joan Didion, and Tori Amos. (See lyrics like: “Saint Joni ain't no phony/ Smoking reds where Furry sang the blues/ My Marilyn shot her heroin/ ‘Hell,’ she said, ‘It's better than abuse.’”) Then there’s the closing song on the record, “Candy Darling,” which imagines the Andy Warhol muse waiting for an uptown train. “I look at [these women] as great artists who, by doing what they did, pushed the ball forward and changed the conversation,” she explains. “They definitely were maligned for being brave and speaking out. But my focus on them is saying thank you for what you did [because] they made life easier for me. And I hope that I can make it easier for the next generation.”

Below, Clark reflects on the other artists who inspire her, from Pearl Jam, to Paul McCartney, to of course, David Bowie.

On Dueting With Paul McCartney & Rocking Out To Pearl Jam

You’ve had some incredible collaborators of late — like Paul McCartney, Taylor Swift, and Phoebe Bridgers. Any wild stories?

Writing myself a duet with Paul McCartney was thrilling. I did a remix of one of his songs, “Women and Wives.” I probably did eight different versions of the song and finally settled on it and sent it off. Then I got a call from Paul McCartney a couple months later saying how much he liked it.

How did you soak that moment in?

I did that thing that I've never done in real life but I've seen people do in movies, which is where they're laughing-slash-crying in disbelief. I didn't realize that was a real thing, until I had that emotion where it's like a Beatle called me!

What’s the first tape you ever bought?

Pearl Jam’s Ten. It was in fourth grade and that's what I wanted for Christmas. Then my stepmother saw that it said the F word, so it was taken away from me. Little did she know I was already cursing like a sailor by that point, so it wasn't the music's fault.

On Joni Mitchell Lyrics & Listening To Bowie While Flying Over Berlin

One of my favorite lines in Daddy’s Home is “Hell, where can you run when the outlaw's inside you?” Tell me about the genesis of that lyric.

That that line, for me, is a lot of things. It connects to the character [in the album] in Los Angeles, who’s running and running. Which is definitely something that I’ve done. I’ve just kept [thinking] it won't catch up to you [if you run], but it always does. Then [it’s also about] looking at your parents and going, “How much of their fate is written into me?” And it’s also just a celebration of it. A real f*ck it. F*ck them.

It will seem a little obvious, but [David] Bowie. The way that Bowie makes me feel, the access to emotion I feel when I listen to Bowie, is unique. It's not an emotion, it's like its own color.

What color is Bowie for you?

I'm thinking of listening to “It's No Game” on Scary Monsters (and Super Creeps). It's liberated. It's perverted. It's sublime. It's disgusting. It's cool. It's queer. It's all the things.

I knew the hits growing up, but I didn't really delve into Bowie until I was probably 21. I remember a specific period of time when I was always on an Air Berlin flight, [going from] Berlin to New York doing press or something. I think it was probably around [my] self-titled album. I just remember taking off in the air, being so exhausted, and Low would be in my headphones as we were taking off. You crest 30,000 feet and you're on side two of Low. It's not an emotional place that any other musician has ever taken me.

More like this
Even If She Tried, Beth Ditto Couldn’t Stay Away From Music
By Ivana Rihter
Ramin Djawadi Is Living Out His Dreams
By Rebecca Long
Olivia Wilde & Harry Styles' Relationship Timeline Started With 'Don’t Worry Darling'
By Jake Viswanath
Twitter Is Freaking Out Over Rihanna’s 2023 Super Bowl Halftime Show Announcement
By Stephanie Topacio Long
Get Even More From Bustle — Sign Up For The Newsletter