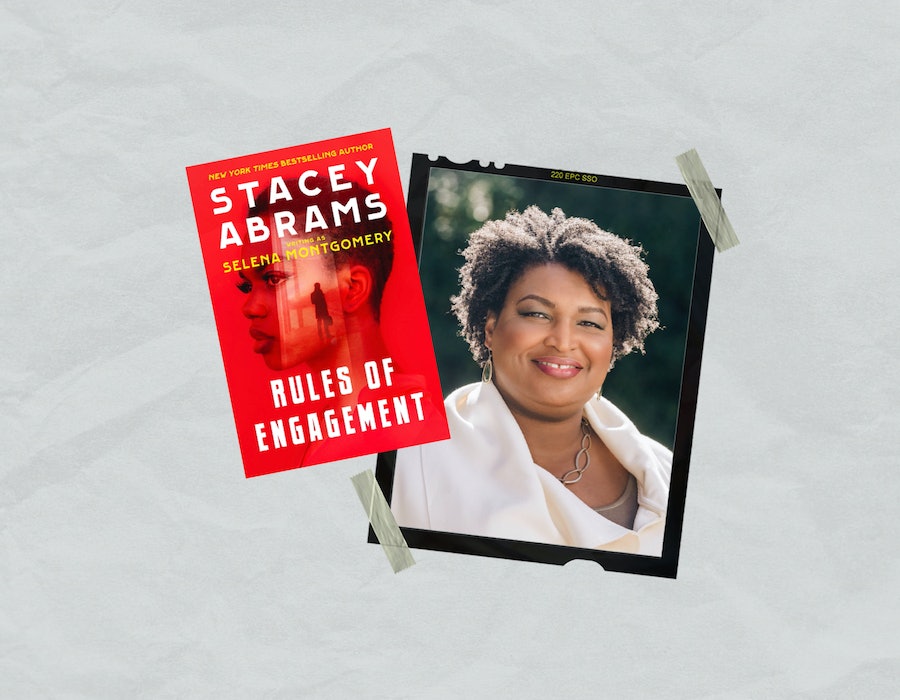 In this exclusive excerpt from the romantic suspense novel Rules of Engagement by Stacey Abrams (writing as Selena Montgomery), two undercover agents are forced to confront their feelings for one another.

Adam whirled around. “Why is infiltrating Scimitar so important, it’s worth your life?”

Raleigh countered with a question of her own. “I thought getting inside meant something to you? Or don’t you care about why Phillip died?”

The barb struck its mark, but the pain didn’t register yet. Not until after he responded. “Not enough to lose you again! I can’t do that a second time. You’re mine!” he bellowed.

Raleigh stared at him, stunned. “What? What did you say?”

Adam caught her shoulders and shook her violently. Desperation compelled him, a race against the demons that haunted him. “I said you’re mine. And I will not let you die a second time! Not for this!”

His. As in someone he wanted, cared about. Her heartbeat stopped, then thundered loudly in her ears. “You don’t mean that.” Alarm swamped her. She could fight her own needs, but not him. Not if he cared about her. Really cared about her. “Take it back,” she demanded absurdly.

In that instant, with her plaintive request, he had his answers. Love filled him, flooded him. Full, brimming, seductive love. “What if you’re my life?” he demanded as Raleigh pulled her closer to him. Her arms were wooden, as though she’d been struck dumb. If her reaction hurt, he’d deal with that later too. Now, the truth was the most important thing. “What if I told you I loved you?”

Raleigh recoiled as though she’d been struck. “Don’t say that. Don’t you dare say that to me.” Hysteria edged her demands.

Adam was bewildered. Fear made sense, but Raleigh was beyond fear. “Why not? Why can’t I tell you how I feel?”

Raleigh paced, furious with him for bringing them to this place where she had no answers. Love wasn’t part of the deal. She had too much to lose, without losing the one thing she might miss the most. So she’d convince him he didn’t mean it. “What you feel is sorry. For me, for yourself.” But a tendril of hope sprouted in defiance.

Outraged and deeply hurt by her dismissal of his feelings, he struck back. “Don’t tell me how I feel! What would you know about love? You, the consummate ice princess. The one who only feels in her dreams.”

The accusation killed the budding expectation. He didn’t know her at all. How could he love a woman he misunderstood so badly? “Did you love me last night?” she asked. “Before I told you about the warehouse?”

Adam ground his teeth. “I don’t know,” he gritted. “I honestly don’t know.”

“I know. You didn’t love me last night. You couldn’t. Because I am the type of woman who would let your best friend die to achieve her objective. Maybe I would even kill him myself if the cause were just,” she warned. Hear me, Adam, she begged, spare us both.

He heard a plea in her low, husky voice. For reassurance? For absolution? “You couldn’t deliberately take a life, Raleigh. I know that now.” If he could hold her, surely she’d sense his declaration was genuine. Adam reached for her.

Raleigh evaded the touch that would surely sap her resolve and leave her floundering in a morass of untutored feelings, hopeless longings. Better you end it now, she thought, before you start to believe him. “No, you don’t know that. You have no clue what I may have become in the past three years.”

He dismissed her protest as nonsense. “I’ve spent time with you,” he began. “Talking. Listening—”

“I’m not joking.” Panic rose inside like bile. She couldn’t do this, listen to this, and do her job. Indignation hadn’t worked. Perhaps pity would. “Take it back. Please.”

“I will not take it back.” Adam smiled at her, his anger dissipated in the face of such terror. She wasn’t fighting him. She was fighting herself.

“Maybe you’re right,” he conceded, willing to give her space for the battle. “Maybe I don’t love you now. But I could tonight. And tomorrow. And the next day.”

“I won’t give you the opportunity to find out.”

“I will unravel your secrets, Raleigh. Each and every one. I will strip you bare, body and soul. And when I’ve revealed you, to my eyes and yours, I will stand before you. I will take your hands and tell you again how much I love you.”

“And you will be free to tell me how much you love me.”

From RULES OF ENGAGEMENT published by arrangement with Berkley, an imprint of Penguin Random House LLC. Copyright © 2022 by Stacey Abrams writing as Selena Montgomery.

'Rules of Engagement'
Bookshop
More like this
Jessica Simpson On The Time She Was Pursued By A Backstreet Boy & An *NSYNC Member
By The Editors
At 28, Rosie Perez Risked Her Career To Stop Playing Stereotypes
By Gabrielle Bondi
We’ve Entered The Hot Boy Reader Era
By Samantha Leach
Savannah Guthrie Got Her First-Ever Tattoo With This Former Wild Child
By Suzanne Zuckerman
Get Even More From Bustle — Sign Up For The Newsletter
From hair trends to relationship advice, our daily newsletter has everything you need to sound like a person who’s on TikTok, even if you aren’t.