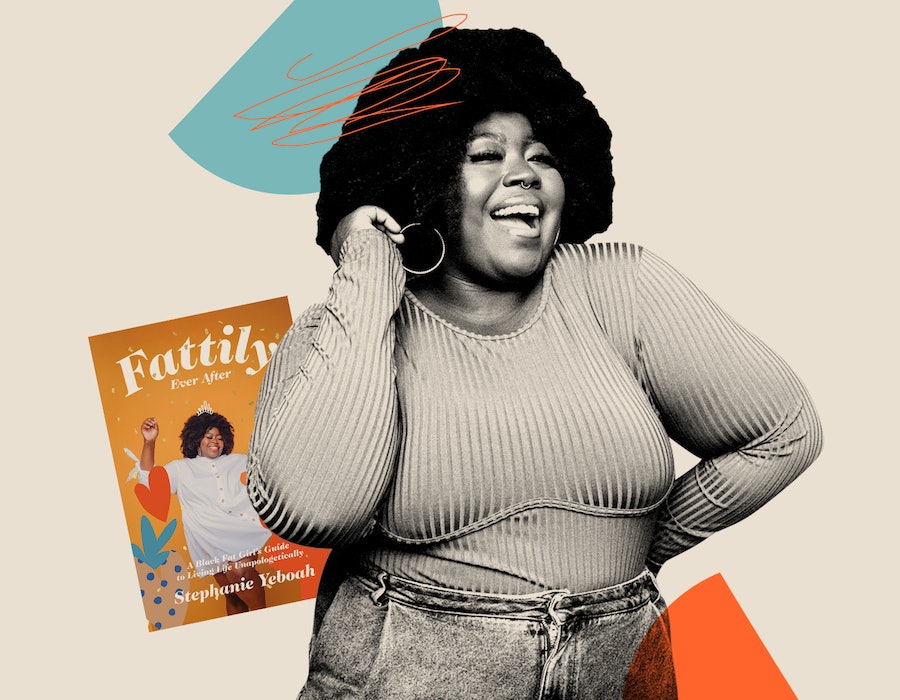 Stephanie Yeboah's Fattitly Ever After starts with a disclaimer: this book is "first and foremost" a love letter to "fat Black women." And, she warns, she isn't here to "coddle the feelings" of those with bodies that are deemed as "socially acceptable by society". "I’ll be talking about a lot of topics that some may see as sensitive or ‘cutting’," she writes. Regardless, now seems the ideal time for honesty. In the words of Nene Leakes (recently popularised on social media), "I said what I said."

The self-love content creator and writer's first book is an unfiltered read for women who look like her — plus-sized, dark-skinned Black women who exist at the intersection where racism, sexism, and fatphobia collide. As she told Bustle earlier this month, Black women and their bodies have "been through it."

Released September 3, Fattily Ever After weaves Yeboah's painfully relatable anecdotes, from horrific dating experiences to school bullying, with hardcore facts about the body positivity movement and key events that have led to today's self-acceptance reckoning. It also highlights the importance of allyship.

From the fun social media-isms (the shenaniganry* of it all!) to the forward devoted to Jason Momoa ("You’re a really great guy, but you’re married, so I think we should just be friends"), this book is unmistakably Yeboah's voice — a voice that has become an important vehicle in the continued promotion of self-love and fat acceptance for plus-sized women everywhere.

In this excerpt, Yeboah recounts meeting Lizzo, a best-selling artist and personal hero of the writer's. Lizzo has become a beacon of fat-acceptance in recent times and in this excerpt, Yeboah reminds the reader why representation matters for those who've often felt invisible in a society that doesn't praise bodies that look like their own.

'Fattily Ever After' by Stephanie Yeboah

Excerpt from Fattily Ever After, exclusive to Bustle UK

I remember being invited to an intimate gig of [Lizzo's] one evening and I couldn’t believe how excited and happy I was to go. It felt like I was going to see the Spice Girls for the first time, but in this instance, she was THEE fat Spice Girl. Someone that I could actually look up to in real time and feel inspired. I watched her, tears spilling out of my eyes as I mimed along to her electrifying set. She was giving me Madonna circa the ‘Vogue’ years, in this pinstriped suit complete with corset. I was gagging for it okay?! It wasn’t until her set finished, that I realized that I had been crying the entire way through, and that I was a bit of a blubbering mess on the dancefloor. It was at this point that a member of her record label noticed me in tears in the crowd and asked if I wanted to come backstage after the set.

GUYS, I COULD HAVE JUST SUNK INTO THE FLOOR AT THAT POINT.

Me? Little old me? A snivelling fan, embarrassing herself in the middle of the dancefloor, to meet the amazingness that was Lizzo? I couldn’t believe it! As I was led backstage, I could feel my heart doing knots. Due to the severe lack of representation and visibility growing up, I’d never had what one would call ‘an idol’ or at least, someone to look up to. But now it seemed to be happening at ultra-fast speed and my heart could barely take it.

We entered the room and there was Lizzo, looking like an absolute vision. She stood up and gave me a hug, after which I burst into tears while she gave me the biggest cuddle. The snivelling mess I was, told her that she was an incredible inspiration to not only me, but the thousands of people who look like us, and that she was the type of person I needed to see growing up, and would I have had that content, I would have probably grown up feeling a lot more valuable and loved as a human being. She also started crying while consoling me, telling me that she was doing this for all the plus-size, black womxn who felt they didn’t have a voice and, in that moment, I felt so whole. I felt that this may be the start of something huge, not just for Lizzo, but for black, plus-size womxn like myself.

One question, however, burns in the hearts and minds of those living in fatter bodies: does the acceptance of a figure like Lizzo equate to acceptance of those who possess the same demeanor AND body that she does? Are we as a society really ready to accept that fat, black womxn are more sexy than they are ‘brave’? Are we ready to accept that fat, black womxn have always seen themselves as great and talented, yet it has been the weight stigma glazed in white supremacy that has inhibited our ability to excel? What happens when the ‘Lizzos’ of the world are not making music and entertaining the masses? What is to be said about the ‘Lizzos’ that are your neighbours and family members? OK, that was quite a few questions there, but you catch my drift.

While those of us who are fat are not expected to have confidence at all, listening to the opening of ‘Truth Hurts’, Lizzo makes her declaration extremely clear, ‘I just took a DNA test, turns out I’m 100% that bitch’. Twerking on stage while playing the flute (!!!) with skill and finesse, Lizzo exudes such beautiful confidence with a surety of her body’s abilities. She is not reminiscent of the fat, black Mammy whose main purpose in life was to be the caretaker of others. Neither is she the depiction of the sassy, fat, black womxn who is full of strife, using deception to get what she, in society’s eyes, could not otherwise qualify for. Quickly, Lizzo dispels any idea that what she does is a minstrel of sorts. Rather, she puts on a show similar to that of her smaller counterparts, obliterating the myths steeped in weight stigma that one cannot be fat and active, or fat and skillful, or fat and confident. Furthermore, Lizzo has no problem sharing the stage with other fat, black dancers, reinforcing the premise that we are a community of many, and she is absolutely not alone.

In the book, Fearing the Fat Body: The Origins of Fatphobia, written by Sabrina Strings, Strings lays out another way in which white supremacy was weaponized against larger, black bodies to offset its desirability and morality. Strings argues, based on her research, that throughout the 19th century, fat, black bodies were framed to be immoral due to the alleged excessive amounts of food they inherently needed to consume. How can eating food ever be immoral? FOOD IS LIFE. The shenaniganry* of it all. Coupling this with the already derogatory beliefs about black people, the church encouraged restraint among its white members, leaving black people who possessed larger bodies and practiced Christianity to internalize the stigma placed on them. Furthermore, this also made it okay to attach other negative attributes to existing while being fat (i.e., laziness, gluttony, etc.), ultimately framing weight stigma as we know it today.

As Strings, and others who preach fat liberation point out, the stigma associated with weight isn’t about health. Rather, it’s a tool for those in power to wield, with the assumption that if utilized properly, their status within our society’s hierarchy will remain intact. Therefore, the goal of weight stigma has always been to keep people who live in larger bodies abased, shamed, and regretful for what they have allowed. It’s to see their identities attainment of a smaller body. Lizzo spits in the face of this system, and I for one, am living for it.

*I’m SO happy that I’ve finally been able to use this in a sentence!