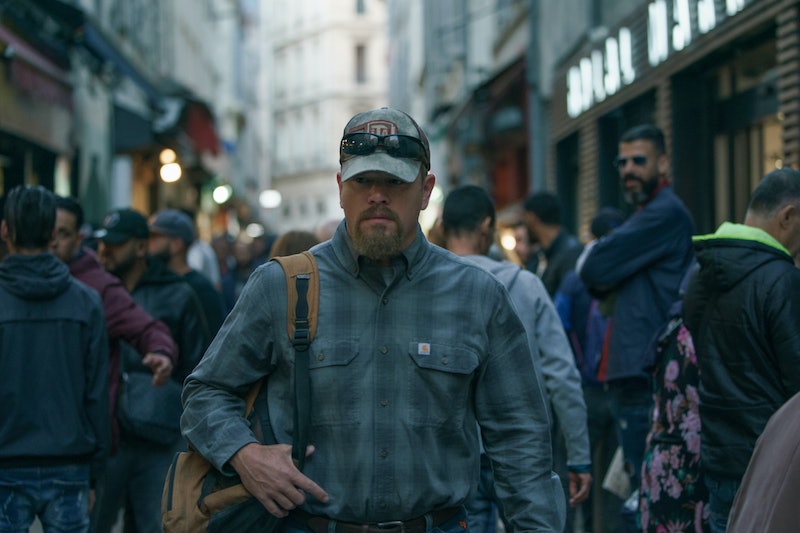 The new movie Stillwater was “directly” inspired by and “loosely based” on Amanda Knox’s highly-publicized ordeal, director Tom McCarthy told Vanity Fair in June. Those who followed Knox’s case will certainly see similarities: Stillwater follows a father (Matt Damon) who works to free his daughter (Abigail Breslin) from a foreign jail, after she’s wrongly convicted for killing someone.

In the weeks after the film’s release, however, Knox has spoken out against Stillwater, writing (first on Twitter, then in Medium and Variety) that it exploits her story. Knox was famously convicted for the 2007 murder of her roommate, Meredith Kercher, and spent years in an Italian prison. Her story was widely reported on at the time, and the Italian media has been accused of disparaging her. Her father Curt Knox championed her innocence, and her family and friends worked with lawyers and the media to exonerate her. She was acquitted in 2015.

In interviews, McCarthy has said the film is fictionalized, but also acknowledged the real-life stories that served as inspiration. So how much of the film is true?

Spoilers for the movie. Much like in Amanda Knox’s case, Stillwater begins with a young woman (Breslin) whose father (Damon) visits her in prison. She’s been convicted of killing a woman, and already served several years of her sentence — although she and her father maintain her innocence. Unlike Knox, the woman is in jail in France, and she only has her semi-estranged father (Damon plays a laid-off oil rig worker) instead of a large and supportive family. Also unlike Knox, the victim was the daughter’s girlfriend, not her roommate. And in another departure from the real-life case, Damon’s character sets out to prove her innocence on his own, based on information she gives him.

As McCarthy said to Vanity Fair, “There were so many characters around the [Knox] case that I really followed pretty closely ... But really the first thing that I took away from it was, what would that be like as an American student to go over [to Europe] ... and to find yourself in that tragedy?”

Inspired by the “story around the story,” specifically the relationship between a father and his convicted daughter, McCarthy says he decided, “‘Hey, let’s leave the Amanda Knox case behind’ ... But let me take this piece of the story — an American woman studying abroad involved in some kind of sensational crime and she ends up in jail — and fictionalize everything around it.” He was also inspired by true crime podcasts, he said.

It’s worth noting that in the film, it turns out that the young woman was involved in the murder: she’d paid off someone to “get rid” of her girlfriend (she claimed that she only wanted to get her out of the apartment, and was unaware her girlfriend would be killed). Her father is deeply disturbed to learn this, but protects her secret. McCarthy said this ending was not inspired by Knox’s story, but rather by the demands of the script.

Knox has become a journalist and podcaster since her acquittal, working to uphold ethical standards in journalism and storytelling. In The Atlantic, Knox explained why she felt wronged, writing, “Others continue to profit off my identity, and my trauma, without my consent.” (The Stillwater filmmakers never approached her, she said.) She also pointed out the problematic nature of the movie’s plot: Knox was falsely accused of having a sexual relationship with Kercher, and in the film the two women were actually in a relationship. In real life, Knox was acquitted, but in the film the daughter isn’t completely innocent.

Furthermore, the film doesn’t focus on any corrupt officials or media sensationalism, both of which Knox faced during her trial. Those forces positioned her at the center of the saga, but she argues that her late roommate — and the man who killed her — should be the focus of the story. “I would love nothing more than for people to refer to the events in Perugia as ‘the murder of Meredith Kercher by Rudy Guede,’ which would make me the peripheral figure I always was, the innocent roommate,” she wrote.

Speaking to Variety, she added, “[The filmmakers] created a story that didn’t really take the premise of my story as a springboard, [but rather] really did entrench itself in the scandalous interpretation of my story that was presented by the prosecution.” She said that the real story of her father and family working to free her is a tale “incredibly worth telling” and that she’d initially hoped the film would do it justice.

Regarding artistic license and creative inspiration, she explained, “I’m not saying that I have full ownership over my life and my identity. I understand that art is going to be inspired by real life. But we also have an obligation toward each other when we so clearly draw parallels in fiction to real-life human people,” adding, “People are going to draw conclu­sions from that fictionalized story and apply that to that real person.”

Knox has invited McCarthy and Damon to appear on her podcast, as she has done with other writers who have covered her case. As of this writing, it doesn’t appear that Damon and McCarthy have publicly responded to Knox’s comments.

More like this
Anne Hathaway Shared A "Thrilling" 'Princess Diaries 3' Update
By Darshita Goyal
Gerard Butler Insisted On Adding This Pivotal Scene To 'Plane'
By Catharina Cheung
Jemima Khan Used Her Own Life As Inspo For 'What’s Love Got To Do With It?'
By Darshita Goyal
Austin Butler Recalls Lisa Marie Presley Showing Him Elvis’ Bedroom
By Jake Viswanath
Get Even More From Bustle — Sign Up For The Newsletter
From hair trends to relationship advice, our daily newsletter has everything you need to sound like a person who’s on TikTok, even if you aren’t.