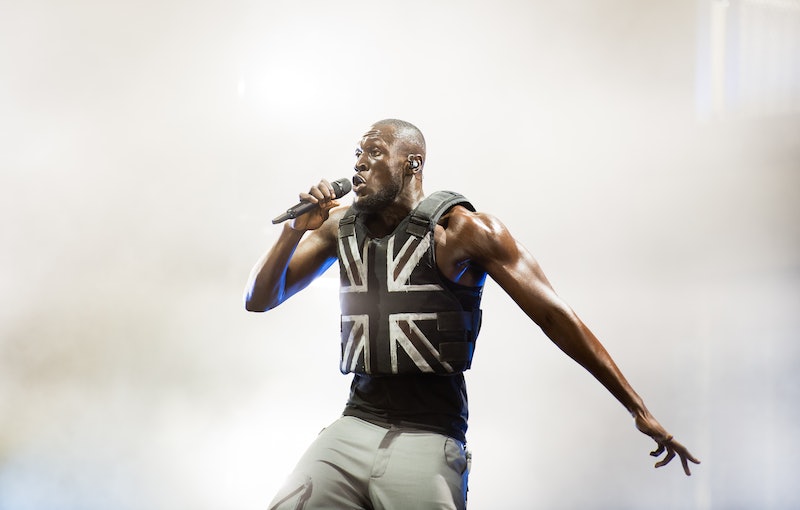 The statement stab-proof vest Stormzy wore during his 2019 Glastonbury performance was pretty special. Designed by Banksy and worn by the grime star to highlight structural racism, it quickly became a major talking point during and after the festival. And now, Stormzy's Glastonbury stab-proof vest is up for a design award, and a pretty prestigious one at that.

The vest joins other impressive designs that have been shortlisted for the Beazley Designs of the Year prize, with the winner being announced at London's Design Museum next month.

The vest was famously created by anonymous artist Banksy from a former police issue garment. It was worn by Stormzy during his electrifying Glastonbury set, as he became the first black British solo artist to headline since the festival began in 1970.

Banksy revealed he was behind the design on Instagram the night of the performance, memorably writing: "I made a customised stab-proof vest and thought - who could possibly wear this? Stormzy at Glastonbury."

The vest joins a whole host of other impressive designs up for the prize. There are in fact a whopping 74 nominations across six categories: architecture, digital, fashion, graphics, product and transport.

Other high profile nominees include the house created by Lee Ha Jun for the Oscar-winning South Korean movie Parasite (which was the masterpiece of director Bong Joon Ho), Bon Iver's album artwork, and the computer technology that took 30 years off of lead actors' appearances including Robert De Niro, in Martin Scorsese's mobster movie The Irishman.

Other genius creations nominated include the Mexico/US border wall see-saws, which allowed neighbouring children to play with one another on each side of the wall, as well as self-sanitising door handles. In short, a pretty impressive line up all round.

More like this
Here’s Where The NHS Nurses’ Strike Currently Stands
By Sophie McEvoy
Pret & Costa’s Coffee Is The Strongest On The High Street, According To Which?
By Sam Ramsden
Gen Z Are Twice As Likely To Identify As Queer, According To New Data
By Sam Ramsden
Here’s What TikTok's "Mascara” Trend Is *Really* About
By El Hunt
Get The Very Best Of Bustle/UK
Sign up for Bustle UK's twice-weekly newsletter, featuring the latest must-watch TV, moving personal stories, and expert advice on the hottest viral buys.