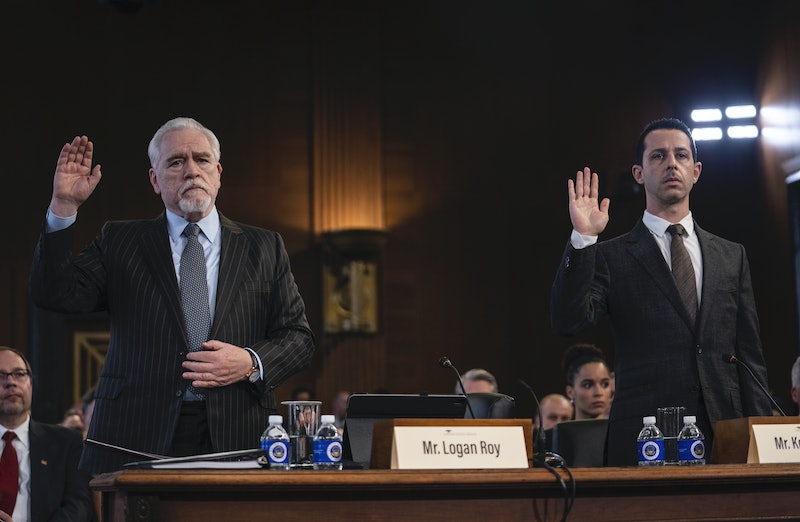 As one of HBO's primary hit shows, it should come as no surprise that Succession received a number of Emmy nominations for the 2020 season. 18 nominations to be exact, tying Ozark and following close behind The Marvelous Mrs. Maisel, which received 20 nods, and Watchmen, which nabbed a whopping 26 noms altogether. As of now, it seems only one member of the cast, Brian Cox, has spoken about all of the Emmy love Succession has received, though it's only a matter of time before others weigh in, especially considering just how many members of the Roy family were nominated in various categories.

Along with earning a nomination for Best Drama Series, Succession received nominations for both Cox (Logan Roy) and Jeremy Strong (Kendall Roy) in the Lead Actor in a Drama Series category; with Nicholas Braun (Cousin Greg), Kieran Culkin (Roman Roy), and Matthew Macfadyen (Tom Wambsgans) earning noms for Supporting Actor in a Drama Series. Meanwhile, Sarah Snook (Siobhan Roy) nabbed her own nomination for Supporting Actress in a Drama Series. The show also earned some nominations for those outside the family, including James Cromwell for Outstanding Guest Actor, and both Harriet Walter and Cherry Jones for Outstanding Guest Actress.

"We’re all thrilled because everybody that’s in the show, practically — Nick and Kieran and Matthew, they’ve all been nominated, which is thrilling," Cox told The New York Times about Succession's 18 Emmy nominations. "And of course Jeremy, in the same category as me, which is delightful. And Sarah Snook as well. Can’t complain. It’s a bit of a cleanup, I think."

The Roys have always been a competitive family, as fans of the show can surely attest to, but now art is about to imitate reality as several of the actors will face off against one another in many of the same categories. But who will come out victorious? Given these Twitter reactions that are coming out of the woodwork thus far, viewers have some clear thoughts on the matter that would make Cousin Greg proud.

The Succession Hive Is Rising

Logan vs. Kendall: The Great Emmys Showdown of 2020

These two have had this day with destiny since the very beginning — it's now just a question of who (if either of them) will walk away with that award.

We're proud of you, Cousin Greg!

When it comes to Cousin Greg, we have no choice but to stan. Congratulations to the whole cast!

More like this
Netflix Shut Down 'Bridgerton' S3 Rumours About A “Very Dark” Storyline
By Bustle
Everything To Know About 'Only Murders In The Building' Season 3
By Gretchen Smail and Kadin Burnett
Linda Ronstadt’s “Long Long Time” Plays A Pivotal Role In The Last Of Us
By Brad Witter
Michael B. Jordan Tackled His "Public Breakup" With Lori Harvey On 'SNL'
By Brad Witter
Get Even More From Bustle — Sign Up For The Newsletter
From hair trends to relationship advice, our daily newsletter has everything you need to sound like a person who’s on TikTok, even if you aren’t.