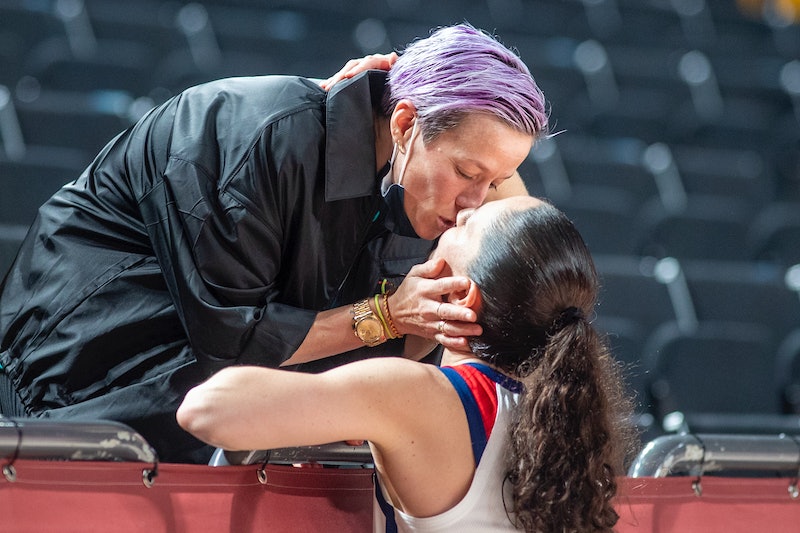 Despite crowds being largely banned from events at the Tokyo Olympics, soccer star Megan Rapinoe got to see her fiancée Sue Bird complete her Olympic career with a fifth gold medal on Sunday, Aug. 8. Rapinoe, who won a bronze medal in Tokyo with the U.S. women’s soccer team, managed to secure press credentials to watch from the stands as Bird led the U.S. women’s basketball team to a 90-75 victory over Japan in the gold medal match. Tokyo barred spectators at Olympic events due to the resurgence of COVID-19 in the host nation, making it all the more meaningful for the all-star couple to be able to share a kiss immediately after the win.

Following the game, Bird opened up about what went into the sweet Olympic moment, telling reporters that “when your partner or your fiancée is also in the Olympics,” one obviously “would love to be able to go and support them, be around them, to give any kind of support possible,” per AS USA. Of Rapinoe being able to attend, the WNBA star added that the couple “didn’t really know it was going to happen until two days ago” and she did “feel very lucky [Rapinoe] was here to witness it, to share it.”

It was also special for Rapinoe, of course. Soon after the win, she posted a photo of the two of them in the stadium on Instagram to share her “congrats.” “I am so proud of you @sbird10,” she wrote in part. “As if I could love you any more.”

When the United States secured the basketball gold medal, Bird went to the stands and kissed Rapinoe, a moment that was celebrated on Twitter. Many fans had been waiting to spot Rapinoe courtside, with one user tweeting, “I watched the Olympics near every day solely for the moment where Megan Rapinoe snuck into the basketball game with a press pass and cried to the interviewer on nbc about how much she loves Sue Bird.” Another fan congratulated the women’s basketball team, adding, “And congrats to me for getting to explain to my boyfriend why Sue Bird and Megan Rapinoe are the best power couple in sports.”

Some fans shared how meaningful the couple’s courtside moment was for the LGBTQ+ community, with one fan tweeting, “I know this sounds silly but sue bird just kissed megan rapinoe on live tv after winning the gold medal and 12 year old me would’ve needed to see that so badly.” Another viewer posted, “Sue bird finding megan rapinoe in the stands and they hugged and kissed in celebration of the victory. what a lovely moment, because it’s still so amazing to see how far we’ve come.”

Bird also expressed her pride at her fiancée’s own performance in the Tokyo Olympics. Just days before, on Aug. 5, Rapinoe won a bronze medal after the United States beat Australia 4-3 in the third-place match, with the soccer star scoring two goals for Team USA. “Of course I’m so proud of her and her team for winning that bronze medal,” Bird said, per AS USA. “The Olympics is hard. It’s really hard. There’s so much pressure involved and so to have both of us medal is something that I know we’ll take that memory with us forever.”

The Olympics are particularly special for Rapinoe and Bird, who met during the run-up to the Rio Games in 2016, putting them on the path to their October 2020 engagement. On Sunday, Rapinoe gushed about Bird in an interview with NBC during the gold medal basketball game, saying her fiancée is “really inspiring” and “everything you would want in someone you look up to.” Visibly proud, she added that Bird “does things the right way, she plays with a sense of joy, she makes everyone else around her better on and off the court.”