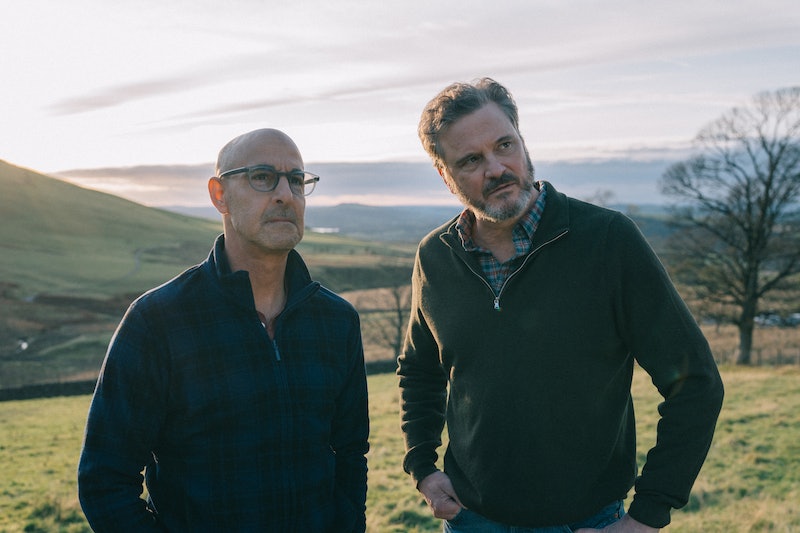 Come for the prospect of Colin Firth and Stanley Tucci playing a charming couple in cozy sweaters and stay for the devastating ramifications of seeing their relationship rocked by a heartbreaking diagnosis. The first trailer for Colin Firth and Stanley Tucci's romantic drama Supernova was released on Tuesday, September 22, in order to provide film buffs with the cathartic, mid-morning cry they've been looking for.

The film follows Sam (Firth) and Tusker (Tucci), a longterm couple who are enjoying a romantic road trip through the English countryside, complete with all of the banter, surprise parties, and uncomfortable sleeping arrangements that such a vacation normally entails. However, not long after the trailer lures viewers in with the prospect of a casual astronomy lesson from Tucci, it becomes clear that there is a more heartbreaking reason for the couple's journey: Tusker has dementia, and this is potentially their final trip together before his illness gets particularly bad.

"I want to be remembered for who I was," Tucci's Tusker says at one point, as shots of the way his dementia is taking hold are shown. "And not for who I'm about to become." In addition to taking its toll on Tusker's physical and mental abilities, the illness also seems to be challenging his relationship with Sam. "It's not fair to you," he says at one point, to which Firth's Sam replies, "It's not about fair. It about love. ... I want to see this through, with you, to the end."

If Tusker and Sam's relationship feels lived-in, even from the trailer, that's because Tucci hand-picked Firth — his friend of 20-plus years — to play his longterm partner. "I thought your sensibility was right, and I thought I needed a great actor to do this with, and that’s you," Tucci told Firth during a conversation with Deadline. "Also, because you’re my friend, and we know each other so well, it seemed we could bring that to it; a history, that maybe two actors who didn’t know each other couldn’t bring."

Adding that their friendship made "a huge difference" to the way they approached the characters, Tucci continued, "Colin’s a great actor and he was right for it, but also there’s a shorthand you have with friends that’s very hard to achieve with someone you don’t know." Firth agreed, explaining that "in the 20 years we’ve known each other, it has gone through many shades, because a lot of it has been frivolous and fun, but we’ve also seen each other through hard times." He continued, saying that though they've never really gone back and revisited turning points in their friendship, "they’ve all probably fed into whatever connection we have today."

Despite that connection, the Supernova trailer has gotten a mixed reaction on social media, primarily from members of the L.G.B.T.Q. community who would have preferred to see the roles go to openly gay actors, rather than Firth and Tucci, who are straight. The debate over whether or not straight actors should play queer roles has raged in Hollywood for years; in 2010, Firth himself said he felt "complicit" in the problem of gay actors being denied major roles in Hollywood shortly after landing an Oscar nomination for A Single Man.

"If you’re known as a straight guy, playing a gay role, you get rewarded for that. If you’re a gay man and you want to play a straight role, you don’t get cast — and if a gay man wants to play a gay role now, you don’t get cast," he said at the time, according to The Huffington Post. "I think it needs to be addressed and I feel complicit in the problem. I don’t mean to be. I think we should all be allowed to play whoever — but I think there are still some invisible boundaries which are still uncrossable."

More like this
Kim Petras Just Made Grammy History
By Jake Viswanath
'Knock At The Cabin' May Start Streaming Sooner Than You’d Think
By Jake Viswanath
Reese Witherspoon Confirms This Fan Favorite Will Return For 'Legally Blonde 3'
By Jake Viswanath
What Is Mary J. Blige’s Net Worth? The 9-Time Grammy Winner Is Doing “Just Fine”
By Hugh McIntyre
Get Even More From Bustle — Sign Up For The Newsletter
From hair trends to relationship advice, our daily newsletter has everything you need to sound like a person who’s on TikTok, even if you aren’t.