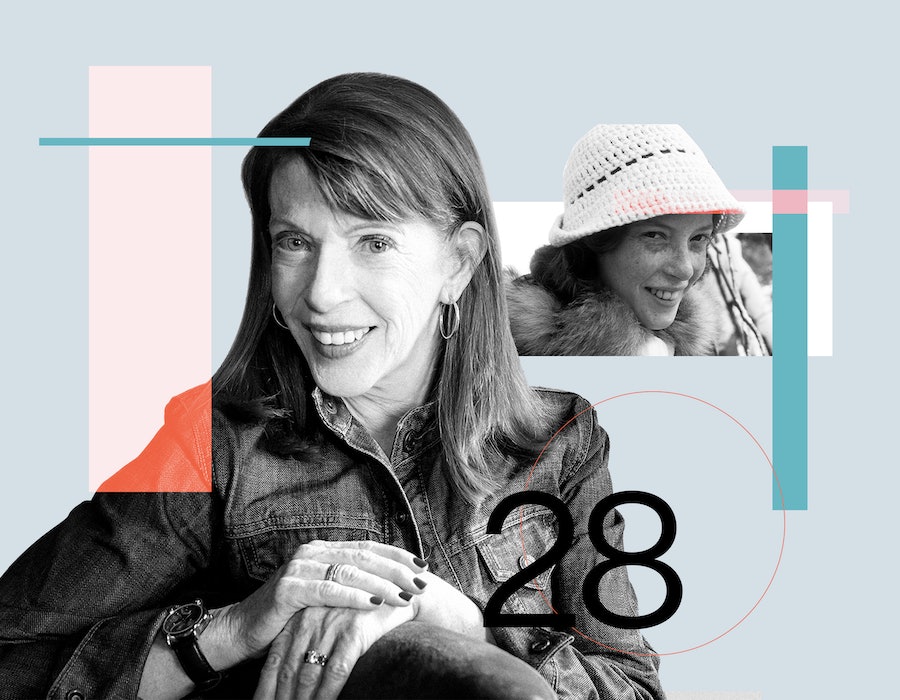 In Bustle’s Q&A series 28, successful women describe exactly what their lives looked like when they were 28 — what they wore, where they worked, what stressed them out most, and what, if anything, they would do differently. This time, journalist and author Susan Orlean reflects on going freelance and dreaming of writing for The New Yorker.

Susan Orlean is used to working from home. As an author and journalist who's written books like The Orchid Thief and The Library Book and who regularly contributes to national magazines like The New Yorker, Esquire, and Rolling Stone, her daily grind has for decades involved being at home with her pen (or her computer) — but even she got stir crazy this summer.

"There have been moments of despair, for sure," she tells Bustle. Those moments have been well documented on Orlean's Twitter, where a string of her rosé-fueled tweets went viral in July. "WHO IS SICK AND TIRED OF EVERYTHING," she wrote, laying plain her pandemic restlessness, with more than 103,000 people agreeing by liking her tweet. Being relatable on the platform is something Orlean has honed to a fine art – other topics have included the wine getting her through the weeknights and her cat, aka "Kitty Non Grata" – and through her new book club with Literati, which kicks off in October, fans will soon be be able to get her reading recommendations shipped to their house and chat with her about them online afterward.

But back in 1983, when Orlean turned 28, there was no such thing as an online community, and real-life ones were harder to come by, too. "There was no Starbucks, so there wasn’t even like, 'I’ll go work at a coffee shop to be around humans,'" she says. "That culture of 'alone together' didn’t exist in 1983." Below, Orlean discusses how she got through the isolation of freelance life, how patient you should be about your career, and the first time she saw her writing in The New Yorker's typeface.

That was a very significant time in my life, coincidentally. I got married that year; I had moved pretty recently to Boston, so I was really in a transitional stage. This was the first time that I was striking out on my own as a freelancer, and it was really... Talk about a new world. It was a big leap to leave The Boston Phoenix [to go freelance]. Even though I had my complaints about it, to suddenly freelance in a city where I didn’t really know a lot of people was really scary. I really felt like I was learning from the bottom up how to basically run a small business, because that’s really what it’s like to be a freelancer.

My then-husband was a student, so I was the only person earning money, and I would only get paid when I sold a story, so it was terrifying. I remember one day I had run out of paper or paper clips, and when you work somewhere and you run out of paper or paper clips, you go to the supply closet and you get [more]. And it was a sobering moment when I suddenly thought, "Oh, I have to go buy paper and paper clips, because I don’t have a supply closet to go to anymore."

Also, it was lonesome. College is so social, and my first job out of college was so social. And suddenly I was home alone, all day long, and I really found it lonely and puzzling. I couldn’t figure out, how do I meet people? I’m just home all day.

What did you do to get through it?

I forced myself. It’s like when you’re traveling by yourself and you just have to force yourself to be friendly and to meet people and go out for coffee and say hello to somebody. It’s pretty weird, but there’s no other way to do it. I was taking a workout class and I met someone in my workout class, I became friends with the owner of the café that I would go to regularly, so I was meeting people here and there, but it was probably the loneliest I’ve ever been.

"The first time I saw my galleys in the New Yorker typeface, I thought I had died and gone to heaven."

I was really ambitious. I wanted very much to start contributing to national magazines with the ultimate goal of writing for The New Yorker, which seemed absolutely insurmountable. But it was my fantasy, so I had that in my head, which is actually kind of a great thing to simply have it there. I went to New York pretty often just to meet editors and try to get a little foothold there, which was probably smart, actually.

I didn’t dream about writing a book at that time because it seemed like the most absurd idea in the world. I just felt not that I would never write a book, but it seemed like a stage well beyond where I was at that point. And the weirder thing is I got my first book contract not long after that.

At 28, you dreamed of writing for The New Yorker. Four years later, in 1987, you published your first piece there. Was that a moment you felt like you finally made it?

The first time I saw my galleys in the New Yorker typeface, I thought I had died and gone to heaven. It was so profound. There is something so iconic about that typeface that seeing your own writing in it is exhilarating and fantastical. I remember in those days we did like five passes on each story with corrections and everything, and we would get the physical printout of each of those iterations of a story, so I kept five hard copies of everything. I’d save each and every one.

I would say that seeing that first Talk of the Town piece was as momentous a professional moment as I have ever had. Of course, as soon as you achieve something, you can picture another goal that you yearn for. So I loved having that galley, and probably five minutes later I was already thinking of the next goal.

Are there other moments in your career when you felt like you made it?

I imagine having Meryl Streep play you in a movie based on your book is pretty up there.

Yeah! Although that’s something that’s so unimaginable that it would never happen in your head as a goal, because it’s too crazy.

I think at 28 I was so ambitious that I felt constantly in a hurry. [I had] such a sense of needing to move on to achieve the next thing to kind of keep moving forward. And while I think that it served me well, it also meant that I was really hard on myself. I was 28, and things were going to happen slowly but surely, and I was impatient. So I’d probably counsel a little bit of patience, coupled with the fact that I also think you can be a little too patient, and I’m glad that I wasn’t still drifting and trying on new personas into my 30s. The balance is the hard thing, of course, to ever achieve. But I think I would just have urged myself to realize that I was on track and things were going to be fine and I didn’t have to have everything happen instantly.

I would probably feel a combination of being a little intimidated but mostly sort of heartened by the realization that you could kind of have a life and still do this crazy career of being a writer and manage it.

It’s the dream, I think.

I’d never say you can have it all, because that’s a myth, but knowing that your life could balance itself would have been very encouraging to me when I was 28.

Susan Orlean's book club on Literati kicks off in October with Dept. of Speculation by Jenny Offill.