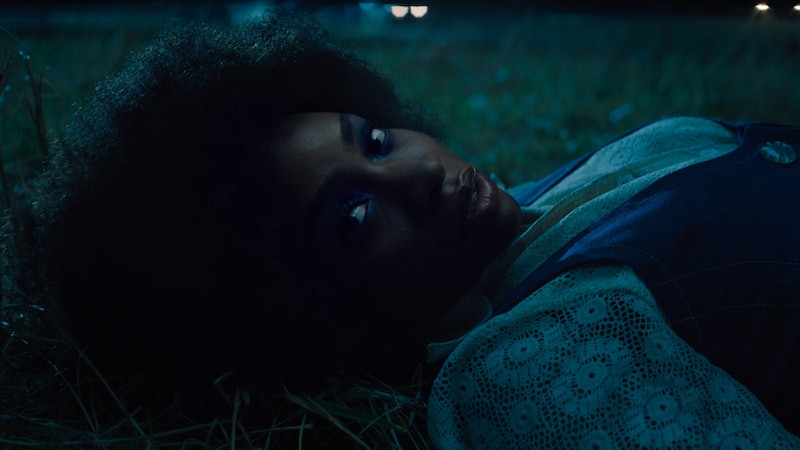 It's still unclear exactly what's happening in WandaVision, but there are a few details we can piece together. For one, we know S.W.O.R.D. — a government agency featured in the Marvel comics — will be involved. The agency has barely been mentioned in MCU's broader on-screen universe: it was hinted at in an early episode of Agents of S.H.I.E.L.D., referenced in a deleted scene of Thor, and is presumed to be the organization Nick Fury and Maria Hill are working on in the post-credits scene of Spider-Man: Far From Home.

However, it seems like it will play a central role in WandaVision. Shots from the set of the Disney+ series show a now grown-up Monica Rambeau (Teyonah Parris) wearing an ID badge that appears to reveal her new profession: as an agent for S.W.O.R.D. So, uh, what is that?

In the comics, S.W.O.R.D. was originally a subdivision of S.H.I.E.L.D. The acronym stands for “Sentient World Observation and Response Department,” with agents focusing primarily on counterterrorism and intelligence surrounding extraterrestrial threats. They're headed up by Abigail Brand, a part-mutant human/part-alien who has S.W.O.R.D. agents embedded with pretty much any superhero team that locks horns with aliens, including the X-Men. Their operation is run from "The Peak," a satellite in Earth's orbit (which, like much in the Marvel universe, has been destroyed and rebuilt at least once).

S.W.O.R.D. has been largely left out of the Marvel comics since about 2015; its role has been replaced by the Alpha Flight Space Program, which is run by Captain Marvel. Whatever S.W.O.R.D. is doing in WandaVision could be a blend of those two organizations — after all, in the comics, S.W.O.R.D. existed as a sort of half of S.H.I.E.L.D., an agency which was disbanded in the MCU back in Captain America: The Winter Soldier. Some even suspect War Machine is working as a liaison between the military and S.W.O.R.D. (assuming that role isn't already taken by Monica Rambeau, an equally ideal choice).

Given the Captain Marvel-adjacent characters, many Marvel fans think that WandaVision is a prelude to a larger MCU storyline about the invasion of the Skrulls (shapeshifting aliens seen in Captain Marvel) like the “Secret Invasion” arc in the comics. So it makes sense that an organization focused on extraterrestrials would be called in. How that will tie into whatever's going on with Wanda Maximoff remains to be seen. But at the very least, it seems clear that the agency is integral to whatever reality Scarlet Witch is living in.

More like this
Louisa Harland’s New Show Is A Far Cry From Derry Girls
By Frances Stewart
Spencer Matthews Will Search For His Brother In A New Disney+ Doc
By Darshita Goyal
The 'Andor' Timeline, Explained
By Gretchen Smail
20 Photos Of The 'Hocus Pocus' Cast Then & Now
By Radhika Menon
Get Even More From Bustle — Sign Up For The Newsletter

This article was originally published on Jan. 14, 2021