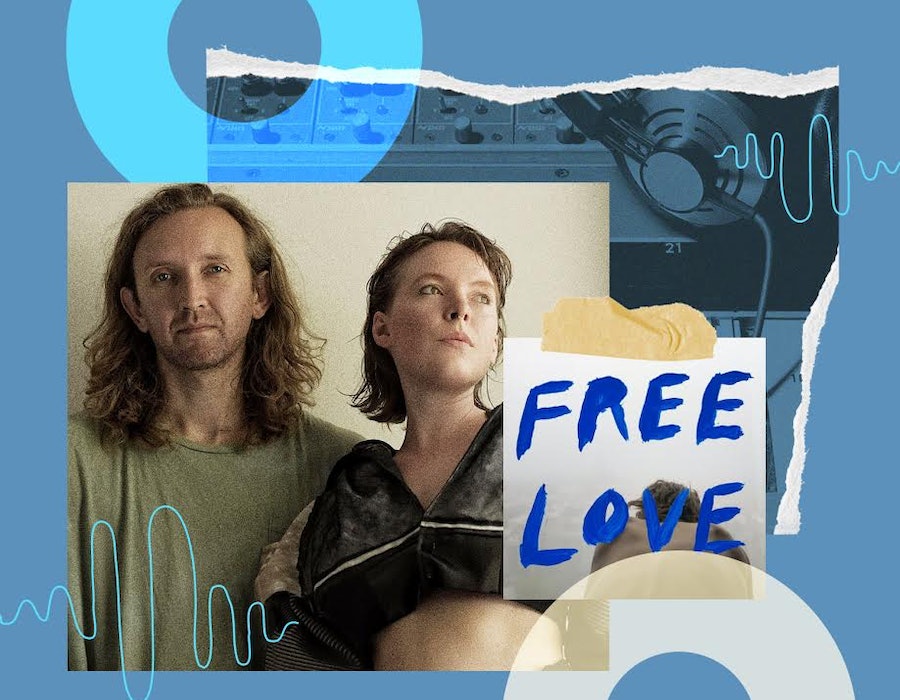 Sylvan Esso, the musical project composed of singer Amelia Meath and her husband and producer Nick Sanborn, is a mesh of contrasting styles and ideas. With Meath’s a capella background as part of the trio Mountain Man and Sanborn’s work playing bass in the psychedelic folk band Megafaun, the band sits somewhere between folk, electropop, and EDM. Though their third album Free Love, released this July, retains the band’s singular sound, their process in creating it was markedly different than on albums prior. After seven years of nonstop touring and traveling, Meath and Sanborn took a rare year of rest and ditched their more rigid roles of singer and producer to collaborate on every part of the album, fleshing out the arrangements with a 10-piece band also known as WITH.

Free Love is simultaneously riddled with existential dread and buoyed by the hope of new love. It’s a reflection of Meath’s own recent revelations about her songwriting process. “For a long time the experience of writing was just really really painful, and that has totally changed,” Meath tells Bustle. “Sometimes I catch myself struggling through something and then I’m like, ‘Oh wait, this doesn't have to be this hard. You’re just making it hard so you feel like you’re doing work.’”

Meath explores her relationship to songwriting in Sylvan Esso’s new podcast, which details her and Sanborn’s interior lives as musicians and people. The 6-part series, called Shaking Out the Numb (taken from a lyric in their song “Numb”) is produced alongside Vermont Public Radio producer Erica Heilman, and snakes its way through many of the band's major inspirations, from their home in Durham, North Carolina, to their tendency to find love everywhere.

With the podcast’s release and the last of their virtual shows wrapped up, Meath and Sanborn now find themselves in a rare state of stillness. "I'm trying not to force myself into being creative again immediately, or to create things for creation’s sake," Meath says. "I'm trying to take it easy." Below, Meath muses on her writing process, Assassin's Creed, and worrying about her sensitive ears.

What does your writing process look like these days?

I suppose I do write every day, [but] not lyrics or ideas. I think of myself more as a studier of the human experience and less of a documenter. I stopped writing in my journal — I used to be a really dedicated journaler and I stopped doing that the minute I started writing songs. So much of my life is about being myself that journaling became really obnoxious because usually I'm really tired of talking about myself.

If not by writing, how else are you dealing with the dread of being alive right now?

Just trying to swim through it. I’ve been learning how to play the guitar and playing a lot of video games.

Have you always been into video games?

I never started until later in my life. I was an only child, so I only got to see video games when I went to other people's houses and it was dudes playing them, so I was really intimidated. I've gotten really into them in the past five years. They're just for a nice brain chill out. If you’re embarrassed about trying to figure out how the controller works and you don't want to have to play immediately in front of other people, which was always a problem for me, play alone.

What are your favorite games?

Right now I'm catching up with Assassin's Creed, which I’ve never really done. I’ve been kind of avoiding murder in video games for a long long time, but I played Ghost of Tsushima this summer and that got me really into murder, so now it’s just murder all the time.

What's the weirdest way a song ever came to be?

I wrote “Could I Be” on a night when I had double ear infections and a really high fever and I couldn't sleep. I get ear infections all the time. It’s horrible. Everyone in my family has small Eustacian tubes. Sometimes I get way too dramatic, because I’m like, “My ears are my gift, and they're so sick and sad!” I get really weepy about that.

How did you know the song was good and not just a fever dream?

If I don't like it pretty much immediately within the first two lines, I won't finish [it]. And by finish it I mean usually I write a verse and a chorus and I am like, “Oh, you are so smart and great, you can rest now!” and then I don't think about it for months and months and then have a total freakout when I have to actually finish writing it.

Did you always know you wanted to make music?

I went to a high school for visual art and dance. I was really lucky to be supported in making art my whole life by my parents and teachers. Dancing was originally going to be the thing I was going to college for, which changed. Then I slowly just discovered that music is the thing I love the most. I really love that everyone feels entitled to have an opinion about music, which I really really appreciate. I like that people feel ownership over it instead of being like, “Oh, this art form is too precious,” or, “I’m not going to touch this.”

Do you have any memories from those college years that have really stuck with you?

Listening to “Naive Melody” for the first time, The Talking Heads song. It’s probably my favorite song. We turned that on when we were cleaning up from a house party and my friend, Alex Bleeker, who is the bassist of the band Real Estate, he put it on because he was my RA at the time and everybody danced around the house. It was ecstatic.

What’s the moment you really felt like a musician?

Oddly, the first time I was filling out a UK visitor’s card [and under] "profession" I got to write "musician." It was when I was singing backup for Feist and was like, "Oh, professional!"

More like this
Craig David Is Still Slicker Than Your Average
By Olivia-Anne Cleary
Even If She Tried, Beth Ditto Couldn’t Stay Away From Music
By Ivana Rihter
Everything To Know About Taylor Swift’s 10th Studio Album, 'Midnights'
By Grace Wehniainen and Jake Viswanath
Everything You Need To Know About ‘Black Panther: Wakanda Forever’
By Bustle Editors
Get Even More From Bustle — Sign Up For The Newsletter