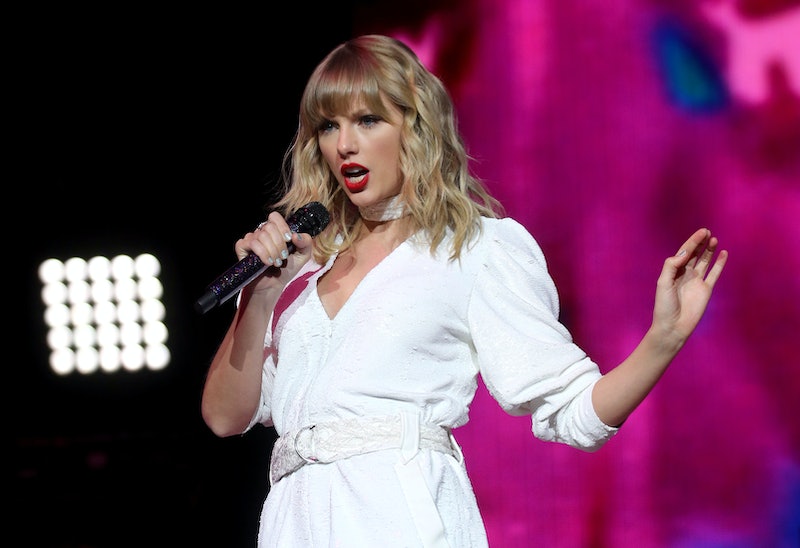 Looks like Swifties really won't have to wait much longer to get some new music from their favorite pop star. On Thursday, July 23, Taylor Swift announced the surprise release of her new album, Folklore. Announcing the news on Twitter and Instagram, the singer revealed that she had written and recorded the entire project "in isolation" during the coronavirus pandemic.

"Most of the things I had planned this summer didn’t end up happening, but there is something I hadn’t planned on that DID happen. And that thing is my 8th studio album, folklore," Swift wrote, alongside a black and white photo of her posing in the woods. "Tonight at midnight I’ll be releasing my entire brand new album of songs I’ve poured all of my whims, dreams, fears, and musings into."

In addition to her surprise album, Swift announced in a follow up Instagram post that she will be releasing the music video for "Cardigan," the first single off of Folklore, at midnight as well. Like the album, Swift explained that the video — which she wrote and directed — was a very DIY affair, in order to keep everyone involved safe. "The entire shoot was overseen by a medical inspector, everyone wore masks, stayed away from each other, and I even did my own hair, makeup, and styling," she wrote.

In her announcement post, Swift explained that she was inspired by the ongoing coronavirus pandemic to release Folklore as soon as it was ready, without overthinking it. "Before this year I probably would’ve overthought when to release this music at the ‘perfect’ time, but the times we’re living in keep reminding me that nothing is guaranteed," she wrote. "My gut is telling me that if you make something you love, you should just put it out into the world. That’s the side of uncertainty I can get on board with."

In true Swift fashion, the singer also revealed that she will honor her eighth studio album by releasing "8 deluxe CD editions and 8 deluxe vinyl editions that are available for one week" for fans to buy on her website. "Each deluxe edition has unique covers, photos, and artwork," she added, in an Instagram post that revealed the track list for her new record.

While Swift hasn't dropped any hints about the musical sound of Folklore, she did reveal on Instagram that she worked with some of her "musical heroes" on the record, including The National's Aaron Dressler and Bon Iver, who is featured on "Exile." The record comes about a year after the release of Lover, and her ongoing feud with Scooter Braun and Big Machine Records over the rights to the master recordings of her first six albums.

Back in August 2019, the singer revealed that she was planning to re-record her first five albums as the follow up project to Lover, in order to regain control over her early catalog. "It's something that I'm very excited about doing, because my contract says that starting November 2020, so next year, I can record albums one through five all over again," Swift told Robin Roberts on Good Morning America. "I think that artists deserve to own their work. I just feel very passionately about that."