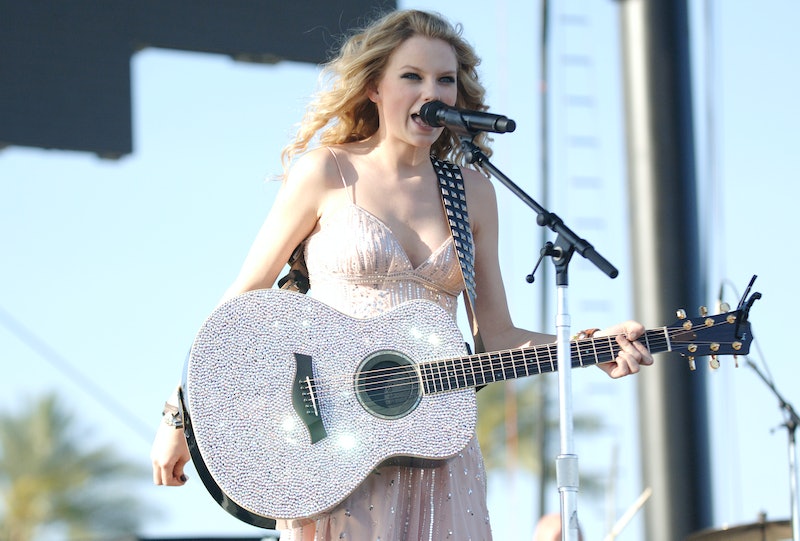 Taylor Swift has been hard at work re-recording her old music, and now we have a first look at the fruits of her labor. On Wednesday, Dec. 2, Swift debuted a sneak peek at her reprise of "Love Story," and truly, the song has only improved since 2008. As the singer revealed on Twitter, one of her (many) famous friends Ryan Reynolds asked to use the song in a new commercial that he wrote for dating app Match, marking the first snippet that fans have heard of Swift's new music.

After Reynolds posted the new "match made in hell" ad, Swift retweeted the video and confirmed that her re-recordings are "NOT done" yet, but she was still happy to let him use the song. "My friend @VancityReynolds asked me if he could use a snippet of one for a LOLsome commercial he wrote so...here’s a sneak peak of Love Story!," she wrote. And luckily, it won't be the last thing that fans hear for a while. "Working hard to get the music to you soon!!," she revealed.

It's quite fitting that "Love Story" is the first re-recorded single that Swifties have received. During a Nov. 25 interview with Good Morning America, Swift revealed that "Love Story" has been her favorite song to revisit so far. "I think it's been the most fun doing 'Love Story' because the older music, my voice was so teenaged and I sometimes, when I hear my older music and my older young teenage voice, it makes me feel like I'm a different singer now," she said. "So it's been the most fun to re-record ones that I feel like I could actually possibly improve upon the song."

In June 2019, Swift made it clear that she planned to remake her old music after Scooter Braun bought her former record label, Big Machine, and received the masters of Swift's first six albums with the purchase, much to her disapproval. Per her Big Machine contract, as of November 2020, Swift was allowed to start re-recording her first five albums. It's not known when she'll be able to do the same with her sixth album, Reputation, which was the final album she released with the label. Under Swift's deal with Republic Records that she signed in late 2018, she owns the masters of her two latest albums, 2019's Lover and 2020's folklore, as well as any future album she records under the label.

In November, after it was reported that Swift's masters were once again sold to another company, the singer wrote an open letter to fans. In it, she claimed that she attempted to enter negotiations to buy her masters from Braun but didn't proceed after he reportedly requested she sign an NDA that forbade her from speaking about him unless it was positive. She said she considered entering a partnership with Shamrock Holdings, the company who now owns her masters, but said the deal was a "non-starter" after learning that Braun would continue to profit from her music for years to come.

More like this
The Spice Girls Just Dropped A Brand New Music Video
By Sam Ramsden
Everything To Know About Taylor Swift’s 10th Studio Album, 'Midnights'
By Grace Wehniainen and Jake Viswanath
20 Years Later, Kelly Clarkson & 'American Idol' Judges Reunite For Her Hollywood Walk Of Fame Star
By Radhika Menon
Netflix Reveals First Look At Wednesday In The 'Addams Family' Spinoff Series
By Bustle Editors
Get Even More From Bustle — Sign Up For The Newsletter