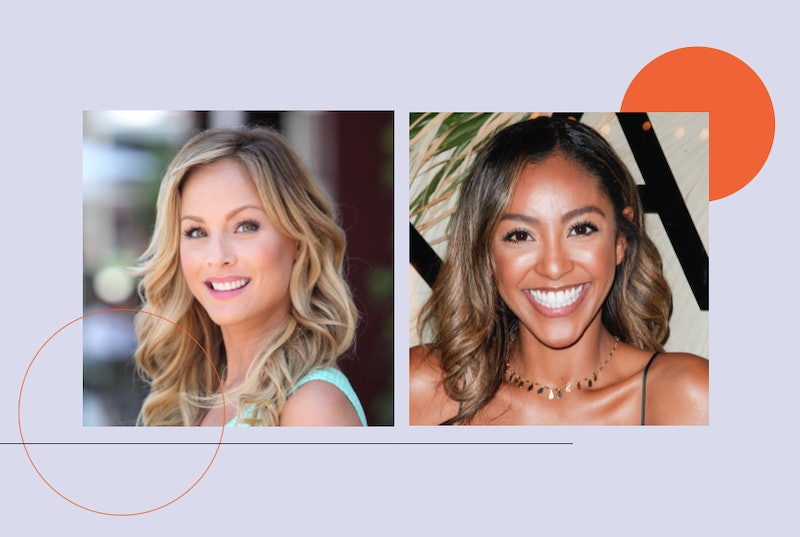 Get ready for another dramatic season in The Bachelorette, and, yes, we think Chris Harrison will agree. Multiple outlets are reporting that Tayshia Adams might replace Clare Crawley as the next Bachelorette — at least in a sense. Bustle reached out to ABC and The Bachelorette reps for comment, but did not receive an immediate response.

Rumors about the change-up began circulating last week when someone on Reddit claimed that production hasn't been getting along very well with Clare, and that Tayshia was being brought in to take over the Bachelorette reins. The unnamed source was supposedly told that Tayshia was in the process of undergoing quarantine and that contestants that Clare had previously eliminated were being brought back to compete for Tayshia's affections. Noted Bachelor blogger Reality Steve could not verify the validity of this claim, though he did think there was some pretty solid evidence behind it so as to not immediately rule it out.

Though nothing has been confirmed by either ABC, Clare, or Tayshia, further fuel continues to be added to the speculation fire. Deadline reported on Monday, Aug. 3, that Clare's exit will be incorporated into the season's storyline rather than just having the producers start everything over from scratch, meaning there would be not one, but two Bachelorettes that would be featured — at least in some capacity — for the first time ever. The outlet also insinuated that Clare's departure has nothing to do with drama behind the scenes, but rather stems from the fact that she has already fallen in love with one of the contestants and didn't want to continue leading any of the other guys on.

The suitor in question who has reportedly stolen Clare's heart is contestant Dale Moss, a 31-year-old former NFL player from South Dakota. He's played for the Green Bay Packers, the Chicago Bears, the Carolina Panthers, and the Tampa Bay Buccaneers before succumbing to a shoulder injury that ended his football career. Since then, he's been signed as a model by the Wilhelmina modeling agency and also serves as a global ambassador for the Special Olympics, according to the official bio on his website.

Production for The Bachelorette has only been underway for two weeks, which seems like a short amount of time for Clare to know who she ultimately wants to be with. But given Clare's longstanding history with the franchise and overall experience with the process, she may just know what she wants at this point. She even appeared to confirm the switch in Bachelorettes over the weekend by briefly liking a tweet about Tayshia becoming her replacement on Sunday, Aug. 2 before unliking it by the next day.

Fans will have to wait until the new season airs to see how this ultimately plays out, but if there's any truth behind these rumors, this is one Bachelorette season you won't want to miss.