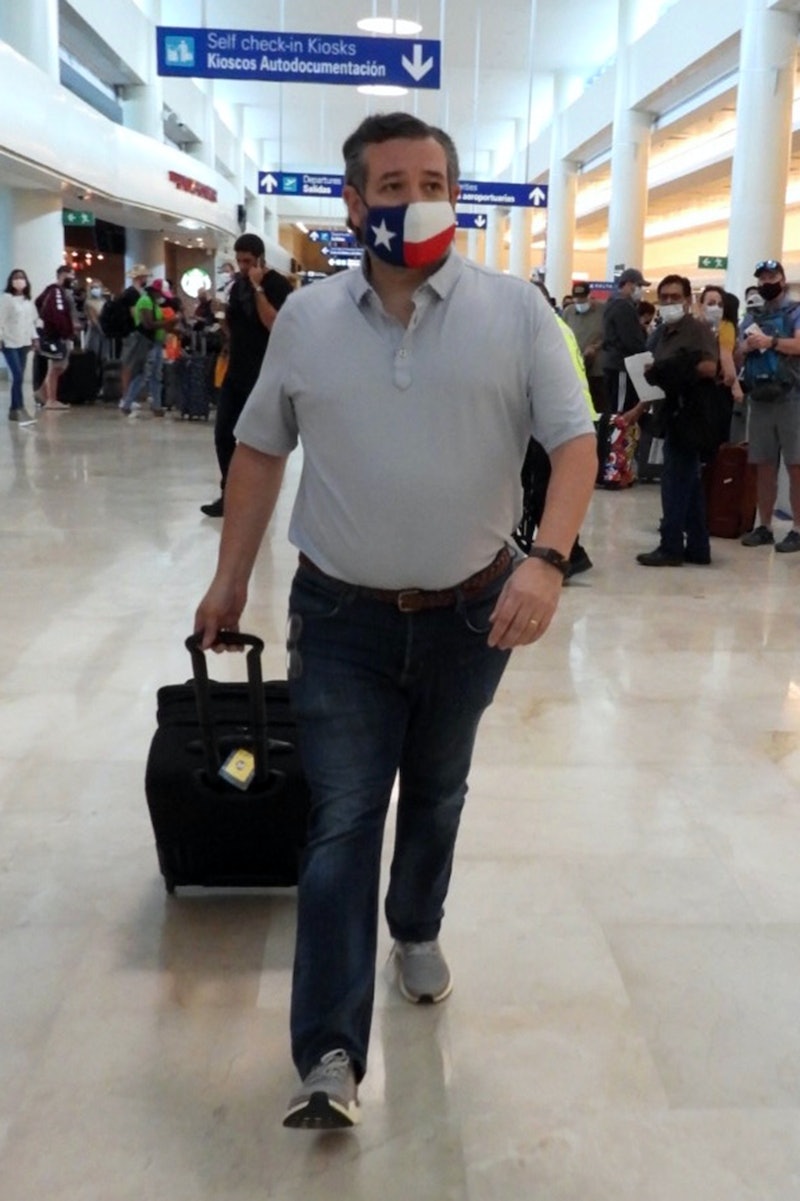 You know the saying: When dealing with a life-threatening storm, escape to tropical paradise! Texas Senator Ted Cruz is being roasted for flying to Cancun while his state is in the middle of a devastating winter storm that has been linked to over 30 deaths and left millions of citizens without heat and power. Soon after he was photographed on Wednesday, Feb. 17 at a Houston airport and on the flight itself with large bags, Twitter went after Cruz, including celebrities like Alyssa Milano, Dylan O'Brien, and even Donald Trump's former White House Communications Director Anthony Scaramucci.

After the travel photos went viral, Cruz released a statement saying that he had only flown to Cancun to accompany his daughters on the plane and would fly back to the United States the next day. "With school cancelled for the week, our girls asked to take a trip with friends," he said, per People. "Wanting to be a good dad, I flew down with them last night and am flying back this afternoon."

However, this contradicts a New York Times report that Cruz traveled to Cancun for a "previously planned family vacation." Additionally, Edward Russell, an airlines reporter for Skift, wrote on Twitter that a United Airlines source confirmed Cruz was originally scheduled to fly back on Saturday, Feb. 20, and had only rescheduled his flight at 6 a.m. on Thursday. (Bustle reached out to Cruz's team for comment but did not receive a response by the time of publishing.)

A spokesperson for the Houston Police Department confirmed that Cruz requested a police detail for traveling, telling People that "when he arrived at Bush Intercontinental Airport, our officers monitored his movements." The HPD did not specify whether this was standard procedure for any politician, especially for a one-night trip. Cruz did indeed return to Texas on Feb. 18, but in the words of iconic singer JoJo, it was too little, too late for celebrities on Twitter.

Many stars pointed out the disparity between Cruz's actions and those of former Democratic Senate candidate Beto O'Rourke, who lost to Cruz in the 2018 mid-term elections. O'Rourke said on Twitter that he and his team made over 150,000 welfare calls to elderly citizens during the storm, actions that many are praising as true leadership.

Some celebrities also doubted Cruz's supposed plan of flying back to Texas after just one day, citing his very full bags as evidence, and were quick to make clever jokes.

As of Thursday, Feb. 18, over 500,000 Texas citizens were still without power, and the state is starting to deal with a water shortage. Will Cruz escape to Cancun again should this affect him? Only time will tell.