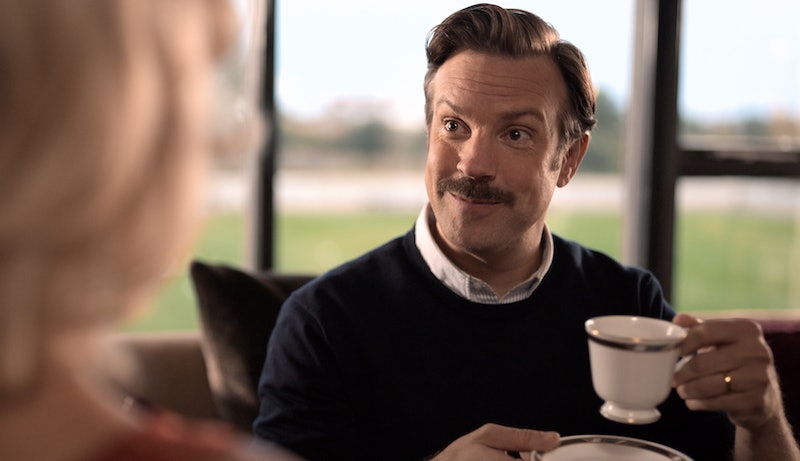 Three years ago, YouTube user Kevin Carr commented, "There needs to be a TV show following the life of Ted Lasso." Fortunately, there is one now. A new series from Apple TV+ stars Jason Sudeikis as the titular football coach, who crosses the pond to coach soccer. And while Ted Lasso isn't based on a true story, you might recognize the promotional videos that inspired the series.

Sudeikis debuted his drawling, American football coach character — who is recruited to coach the Tottenham Hotspur — in August 2013. NBC Sports had just acquired the rights to broadcast the Premier League (the UK's soccer league) across the pond and recruited the SNL castmember to help promote their soccer coverage. "Football's football no matter where you play it," his character says in the original video. "You got grass, you got cleats, and you got helmets with masks on them."

Indeed, Lasso is in for a rude awakening at his new job, where he's forced to learn that there are two halves instead of four quarters, games can end in a tie, you can't touch the ball with your hands, and — perhaps most importantly — the ball has to go into the goal and not over it to get one point (not three, as Ted mistakenly believes).

Sudeikis reprised his character in 2014, when Ted has monetized his short soccer coaching career (he's fired at the end of the first installment) into a gig as a commentator. Once again, the American is quickly fired due to his complete lack of soccer knowledge, after which he returns to the States, watches games at a local Arsenal bar, and begins coaching a girls' team called the St. Catherine's Fighting Owls ("whoo?!"). "In my mind, you got to have three things to be a Premier League team," Ted explains in the second video. "One, you got to play physical. Two, you got to give 100 percent to the final whistle, and three, you got to be sponsored by a Middle Eastern airline."

These two videos were extremely popular and successfully promoted NBC Sports' coverage of the Premier League, according to Sports Illustrated. But while it's been six years since Ted Lasso graced our screens, Sudeikis has been thinking about turning his coach character into a TV show for several years. He told SI that it was actually his partner, Olivia Wilde, who in 2015 suggested that Ted Lasso had series potential. "I said, 'I don’t know,' but then after marinating on it, I thought maybe this could happen," he recalled.

Later in 2015, Sudeikis and his writing partners Joe Kelly and Brendan Hunt began throwing ideas around. "When you have a germ of an idea, you don't know if it's something you say out loud or if it's a tweet or a letter or a screenplay, who knows," Sudeikis told SI. "So, we sat down, and we were able to bang out a pilot pretty quick in that week. As well as outlining six to 10 episodes of the first season. And that let us know, 'OK, there's something here.'"

After that, however, the preliminary script sat around until 2017, when Sudeikis began playing pickup basketball with Cougar Town and Scrubs creator Bill Lawrence. Lawrence told SI that he was a huge fan of Sudeikis' work on SNL and had seen his NBC Sports promos. He agreed to come onboard as a co-creator, suggesting that they make Ted's character more well-rounded. As a result, they made the American coach into less of a buffoon than in the original sketches, which makes you want to root for him.

"Jason really wanted to do a show that was hopeful and optimistic, and most sports movies have that," Lawrence told the sports magazine. "That's what's at their core. It's the underdog. We were trying to capture that optimism and hopefulness that comes with those iconic figures from your life, whether it's a coach, a teacher, or a parent."

But whereas Lasso coached a real life Premier League team in the NBC sketches, the TV show depicts Ted moving from Kansas to oversee a fictional team called AFC Richmond. What's more, Sudeikis told SI that the TV version of his character was partially inspired by the Liverpool coach Jürgen Klopp. "Man. When I heard about him taking his squad to go do karaoke, I was like, 'Hellooooo, story idea,'" Sudeikis told SI, going on to say that he's also a fan of Manchester City coach Pep Guardiola. "I really like the way they handle themselves as leaders of an organization," he continued. "They are guys who I would follow into a fist fight."

But while Ted Lasso might have more heart in the Apple TV+ series, he's still a proverbial fish out of water in England, calling tea "hot brown water" and getting confused about how many countries are in the UK (a callback to the original sketches).

Now, if only Ted can figure out what "relegation" means, he'll be golden.