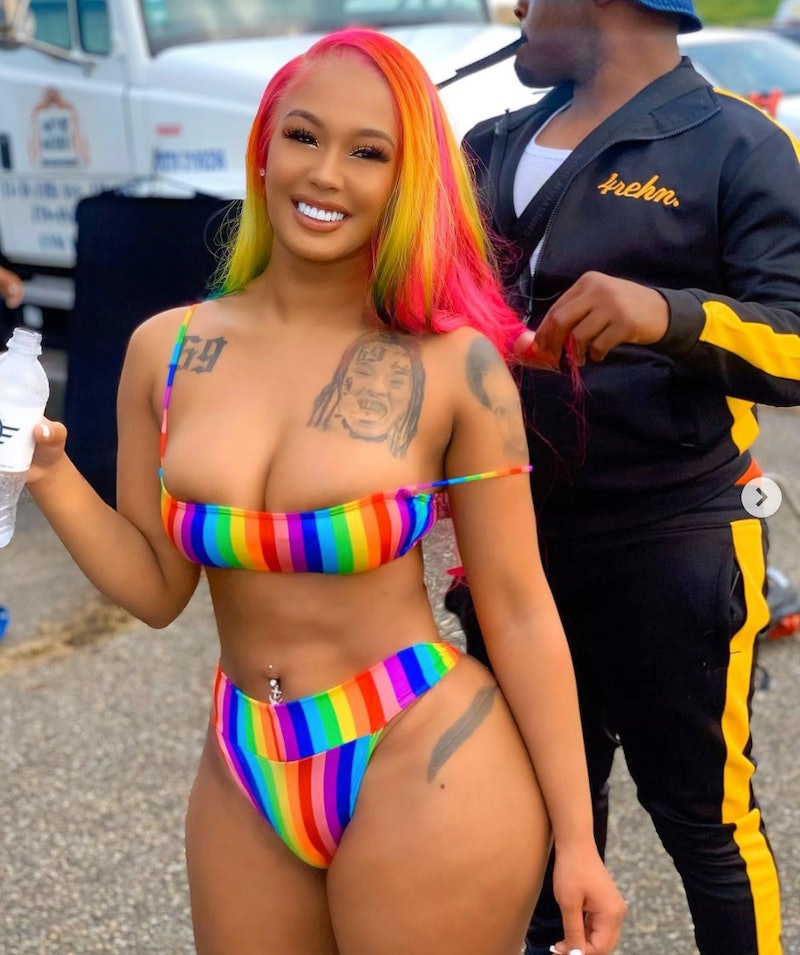 Showtime's new docuseries Supervillain: The Making of Tekashi 6ix9ine features interviews with 6ix9ine's girlfriend Jade, who has been by the rapper's s side throughout his tumultuous last three years. In December 2018, 6ix9ine, whose given name is Danny Hernandez, was sentenced to two years in prison after being arrested on charges of racketeering and armed robbery in November 2018. His initial charge of 32 years was shortened after he cooperated with law enforcement by exposing several members of Nine Trey Gangsta Bloods, a gang with which he was previously associated.

Now, Hernandez is out of prison and reunited with Jade, whose real name is Rachel Wattley, thanks to an early release at the onset of the pandemic. (Hernandez has asthma, making him more vulnerable to coronavirus.) The rapper served the remainder of his sentence on house arrest, and so did Wattley. "House Arrest Day #627," she wrote on Instagram in June 2020. "57 more days........" Before Hernandez's sentencing, Wattley, who has a tattoo of his face on her chest, wrote a letter to the judge in his defense, calling the person she first met a "respectful, outgoing, very sweet, and kind-hearted" man. In January 2020, she wrote a long, emotional Instagram post alleging he was unfairly imprisoned. "They can’t break you, no one understands why people still love you and support you," she wrote.

In August 2020, four months after Hernandez's release from prison, Wattley captioned an Instagram video of her posing in pink spandex suit with the words "I'm pregnant." The next day, she shared a cuddly video with the rapper writing, "My baby daddy so dumb." Neither she nor Hernandez have commented on the announcement since then. Wattley is already mom to a five-year-old daughter, Jaela.

Aside from her relationship with Hernandez, Wattley is known for her 2018 altercation with Cardi B. The "Up" rapper reportedly planned an attack on her and her sister at a New York City strip club where they were bartending after suspecting that Wattley slept with her husband Offset. In June 2019, Cardi was indicted by a grand jury on 2 counts of felony attempted assault but pled not guilty, per Vulture.

More like this
Kanye West Apologizes To Kim K "For Any Stress I Have Caused" In Rare Interview
By Jake Viswanath
Jason Derulo Is Launching A New Singing Show In The UK
By Maxine Harrison
20 Years Later, Kelly Clarkson & 'American Idol' Judges Reunite For Her Hollywood Walk Of Fame Star
By Radhika Menon
18 Years After 'American' Idol, Jennifer Hudson & Simon Cowell Reunited On Her Talk Show
By Radhika Menon
Get Even More From Bustle — Sign Up For The Newsletter