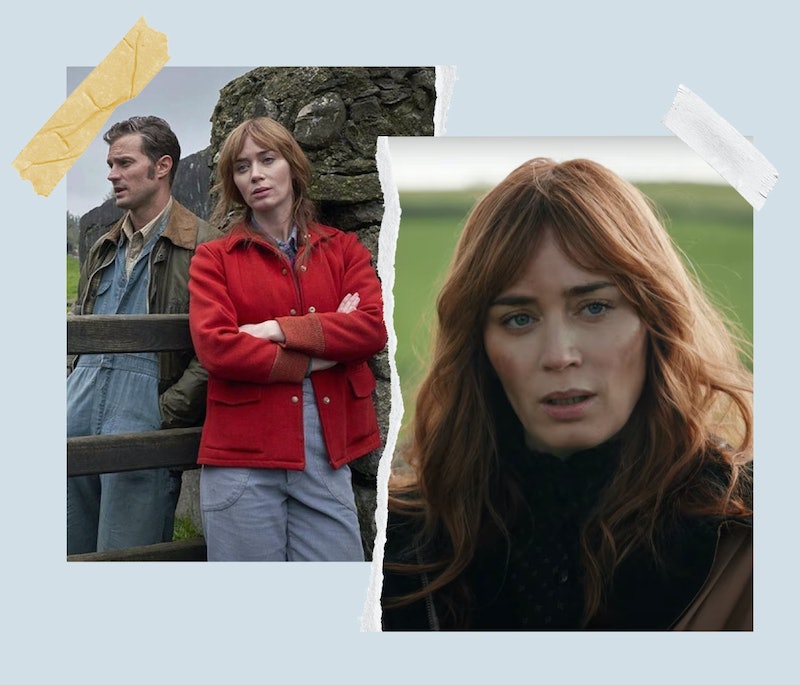 “Cringe in its purest form” is probably not the description that filmmakers are aiming for when they put out a movie trailer. But that’s what London-based Irish comedian Jasmin Gleeson had to say about the preview for John Patrick Shanley’s film Wild Mountain Thyme, an adaptation of his play Outside Mullingar. The romantic comedy stars Emily Blunt and Jamie Dornan as neighboring rural Irish farmers in County Mayo who fall in love as Dornan’s father (Christopher Walken) is deciding whether or not to sell the family’s property to his American nephew (Jon Hamm). “Ireland [already] has been through so much in terms of the famine, the recession, and Gerard Butler’s accent in P.S. I Love You,” Gleeson tells Bustle of the film. “I feel like we’ve had enough!”

From the moment the three-minute clip was released, the controversy over the egregious dialect issues in Wild Mountain Thyme became the center of its commentary. The Dublin Airport tweeted about the need for accent police, and the Leprechaun Museum joked that even they thought the trailer was “a bit much.”

“I can’t even figure out the time [period] the movie’s supposed to be [set in],” says Katie Boyle, an Irish comedian currently based in New York. “It seems like the American version of what an Irish movie from the 1950s is supposed to be.”

Irish accents are notoriously difficult because they're hardly uniform. Despite the region's smaller population of roughly 6.6 million, there many dialects and offshoots of those dialects. Even people in the same school — and sometimes the same family — can speak entirely differently. “[Our] accents are hard, I get it,” Irish comedian Lolsy Byrne, who’s currently living in Auckland, New Zealand, explains. “That being said, I feel there’s the notion of the ‘Hollywood’ Irish Accent — the diddley-eye, potato-munching, red-hair-and-freckles accent that’s reserved solely for leprechauns and Hollywood films — and this is what we are hearing in Wild Mountain Thyme.”

Who did the best and the worst when it came to attempting the country accent? Bustle asked the aforementioned Irish comedians — Gleeson, Boyle, and Byrne — to serve as an advisory board on the film’s trailer. Read on for their ranking each actor’s elocution and tone on a scale from one (being absolutely abhorrent) to five (being perfect).

Boyle: That was awful. The Irish accent is actually very fast, and his every word has a whole stop after it. It’s exhausting.

Byrne: Chris, Chris, Chris... I mean, that voiceover at the start is brilliant. He absolutely nails the accent. Like in Celine Dion’s song, there were moments of gold and flashes of light, but a minute into the trailer, it’s all coming back to me. ("It" being that Walken "Noo Yawk" voice we know and love.) Christopher Walken sounds like someone who left Ireland 20 years ago and lost most of their accent, but tries to put it on when they talk to their elderly mammy on the phone at Christmas.

British actress Emily Blunt appears as Rosemary Muldoon, a woman who’s been in love with her neighbor Anthony since childhood.

Gleeson: I love Emily Blunt, and she probably could nail the accent, but I feel like she was told to add more Irish-y elbows or something to it. They were like, "Turn up the leprechaun in your accents!" Surely there’s an Irish person on that set who said, "Please, somebody stop this!"

"Christopher Walken sounds like someone who left Ireland 20 years ago and lost most of their accent, but tries to put it on when they talk to their elderly mammy on the phone at Christmas."

Boyle: It’s the worst accent that’s ever existed. She might as well have been singing her lines. She was doing that stereotypical musical Irish accent. It was so bad.

Byrne: There are parts of her accent that are really good! When she’s being subtle or muttering, the accent is at its best. But when she goes off into full wistful, lilting soliloquy, she loses it. "Aye dew like dahhht?" Nah, I don’t like that.

Gleeson: He has to get a one [rating] because he’s Irish. He should’ve known better. He should’ve said something. I think there’s a sense of shame when an Irish person gets it so wrong. Like, how could you do this to us?

Boyle: I feel bad for him, because if I’m able to do a Northern Irish accent, he’s able to do a country accent. I just feel like he was told that he needed to do the Americanized version. It’s terrible! But if you offered me a million dollars, or even half a million, I too would be like, "Top o’ the mornin’ to ya! Where’s the Lucky Charms?"

Byrne: OK, people are giving Jamie an awful hard time because he’s Irish and yet his accent in this is woeful. He’s Northern Irish. The Northern and Southern accents are very different in comparison, and though it sounds odd, Irish people can find it difficult to do other Irish accents. (You should hear me, a Dubliner, trying to do a Cork accent. It’s an abomination. My apologies to the people of Cork.) My bone to pick with Jamie is that he’s not doing an Irish accent here; he’s doing the "Hollywood" Irish accent and he still slips up doing it.

Gleeson: She nailed it. She sounds like my grandmother. And she’s Irish herself. I’m like, "Jamie, talk to Dearbhla!"

Boyle: I thought hers was grand! She just sounded like my granny or something.

"If you offered me a million dollars, or even half a million, I too would be like, 'Top o’ the mornin’ to ya! Where’s the Lucky Charms?'"

Byrne: She’s Irish so she should get five out of five but alas, she only features in the trailer for 0.73 seconds, so I guess we’ll have to wait to find out.

American Jon Hamm plays Adam Kelly, Tony’s nephew from the States — who speaks in his native American accent throughout the film — and is looking at taking over the farm.

Gleeson: He’s the only normal-sounding guy and he’s American in the movie. You feel relieved to see him. I won’t be hurt by him! Let’s just get rid of everyone else and have Jon Hamm walking around Ireland. Give him a six out of five, he smashed it.

Boyle: He still sounded like a stereotypical American in the way we’d see it as Irish people.