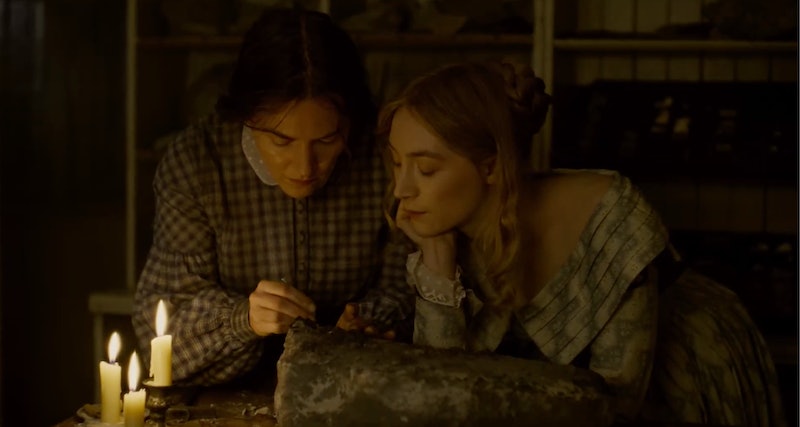 Kate Winslet and Saoirse Ronan may be looking for fossils along the English shoreline, but they're about to find something more. The first trailer for Kate Winslet and Saoirse Ronan's Victorian romance Ammonite was released on Tuesday, August 25, and it promises to shed new light on the work of 17th century scientist Mary Anning, along with the "intense" romance that changed her life.

Winslet plays Anning, a tough fossil hunter who does her backbreaking, unappreciated work alone until a wealthy tourist asks her to take on his wife — the sickly, Charlotte Murchison (Ronan) who suffers from "melancholia" — as her apprentice. Charlotte doesn't like the water, but it seems that the pair do indeed strike up a "friendship," as it's referred to in the trailer, that allows them to open up to one another.

Winslet and Ronan share longing glances that turn into hidden touches that all builds to a passionate kiss, with Ammonite teasing the queer Victorian romance that fans have been waiting for. Unfortunately, it seems like this particular romance, which is written and directed by Francis Lee, won't exactly have a happy ending. "I don't want to go back to the life I had before you," Charlotte tells Mary at one point in the trailer. "What about my life?" Mary counters, while images of them sobbing and embracing flash across the screen.

Ammonite is Lee's follow-up to the 2017 romantic drama God's Own Country, about male farm-hands from Yorkshire, England. However, most social media users have been comparing the trailer to a different queer period romance: 2019's Portrait of a Lady on Fire. Like Ammonite, that film — written and directed by Céline Sciamma and starring Noémie Merlant and Adèle Haenel — centered on a passionate, forbidden love affair between two women, and it also tackled issues of class differences and patriarchal society and the way it treated women and people interested in the same gender.

Of course, there's also the fact that that both trailer feature shots of the female leads sharing secret, longing looks and passionate embraces, as well as a shot of a painting being set on fire. Twitter users couldn't help but share posts highlighting the similar shots and themes on social media, as well as sharing their excitement to see more female-focused queer love stories on the big screen.

In addition to chronicling the pair's life-changing romance, Ammonite will also shed light on some of the major scientific discoveries that Winslet's character made during her lifetime. Mary Anning is credited with making some key scientific discoveries in the Jurassic marine fossil beds in the cliffs off the coast of the English channel, and her work helped change the way that scientists thought about prehistoric life and the way that life on Earth changed over the course of evolution. She is also credited with discovering the first correctly identified ichthyosaur and two complete Plesiosaurus skeletons — though, of course, she wasn't fully credited for her work until after her death in 1847.

Ammonite will debut at the Toronto Film Festival in September; as of right now, a release date hasn't been announced.

More like this
'Wakanda Forever' Is Already Opening Doors For Mabel Cadena
By Grace Wehniainen
How To Stream 'Black Panther: Wakanda Forever'
By Chloe Foussianes
Claire Foy & Rooney Mara Revisit A Devastating Tale In 'Women Talking'
By Bustle UK
The 'Love, Lizzo' Harry Styles Scene Is Just 1 Moment That Made Fans Feel Seen
By Brad Witter
Get Even More From Bustle — Sign Up For The Newsletter