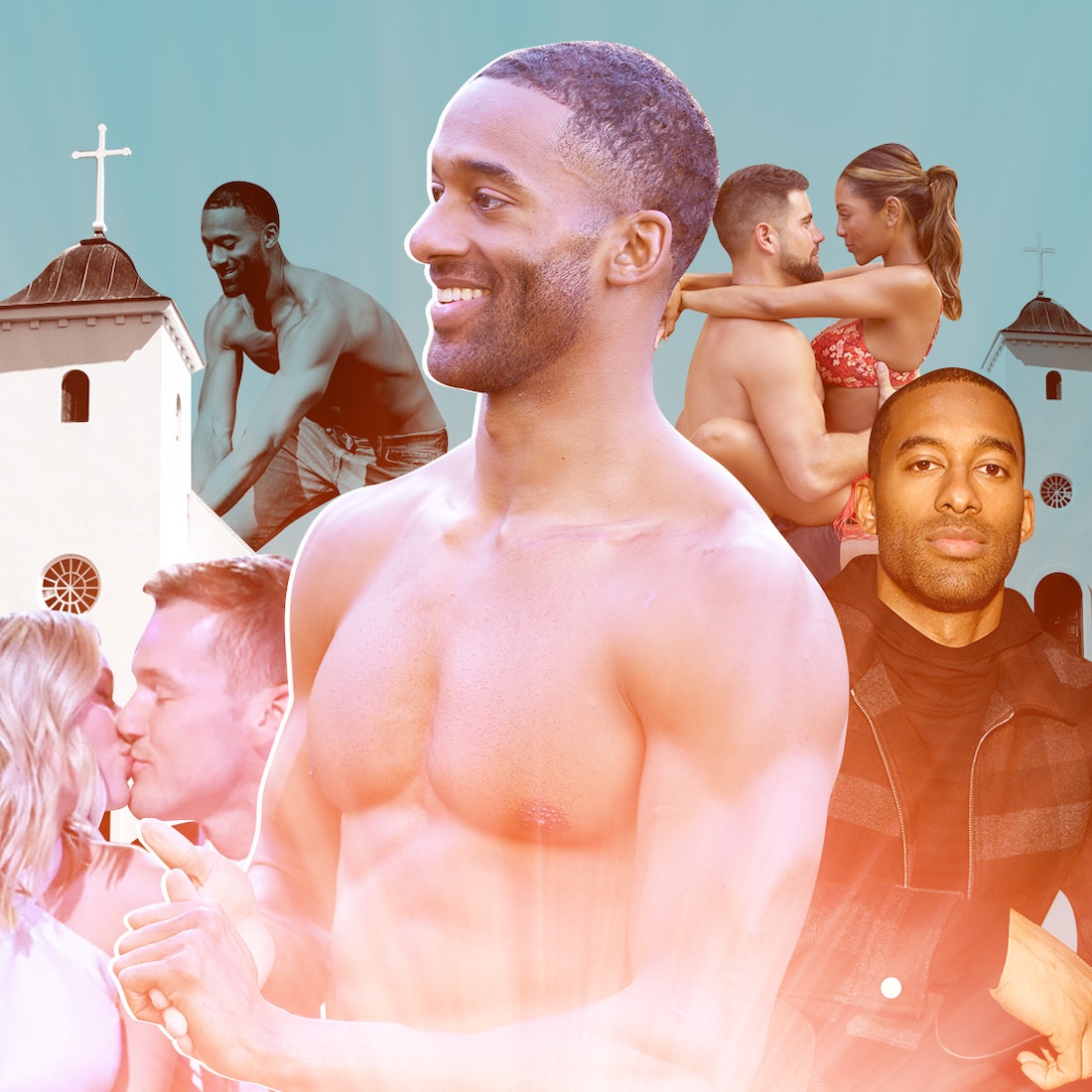 Matt James began his season of The Bachelor with a prayer asking “Father God” to bless his journey to find a wife among 32 women on national television. When he opened his eyes, the women responded with whoops and cheers.

For someone like James, whose Christian faith is foundational, appearing on The Bachelor doesn’t seem the most obvious place to land a spouse, especially given the guaranteed carnal temptations of hot-tub dates and Fantasy Suite Week. But this perception relies on a narrow idea of Christianity as synonymous with conservative family values, a perception increasingly on the outs among millennials and Gen Z.

On The Bachelor, a prayer and a sex toy existing in the same scene is hardly out of character. The franchise has long mixed vocally Christian leads (see: Bachelorettes Tayshia Adams and Hannah Brown and Bachelors Colton Underwood, Peter Weber, and Ben Higgins) and contestants (see: Madison Prewett, Cassie Randolph, and Caelynn Miller-Keyes, to name a few) with overt sex appeal. The bigger question is how America’s guiltiest pleasure became a hotbed for highly Instagrammable twenty-and-thirty-something Christians in the first place.

For Kristin Du Mez, historian and author of Jesus and John Wayne, it's to do with the intergenerational shift underway among under-40 believers who see no friction between sex appeal and shining for Christ. “You can draw people into Christ with brand appeal and being really cool with celebrity culture,” Du Mez says, citing hipster megachurches like televangelist Joel Osteen's Lakewood Church, where A-list musicians are recruited for star-studded performances.

Other megachurches like Hillsong are known for their celebrity congregants, which until recently (due to a scandal involving pastor Carl Lentz) included Justin Bieber, Demi Lovato, and Selena Gomez. In fact, the connection to Bachelor Nation is so explicit that before Bieber became a parishioner at another megachurch, Churchome (which also counts Seahawk Russell Wilson as a congregant), the singer nearly spoiled the ending of Peter Weber’s Bachelor season when he ran into Weber and Prewett at Hillsong before their season wrapped.

Du Mez teaches at Calvin University, where for the past decade she’s observed attitudinal shifts in her mostly twenty-something students, who are eager to shed the image of Christians as culture warriors. Instead, they want to be deeply embedded within popular culture; to influence it, and in some cases, to lead it. While many Bachelor Nation members become influencers after appearing on the show, their sponsored content isn't always agnostic. Promoting Christ via products can be of service, too, as Prewett has proven. Since leaving the show (and breaking up with Peter Weber), she's teamed up with FaithSocial to promote a social network delivering upbeat Christian content to a global body of believers, and also launched the Family Virtues bracelet line. Less firebrand, more lifestyle brand.

Prewett announcing her partnership with FaithSocial.

In some ways, this is nothing new. Evangelicals began broadcasting sermons live on cable television in the sixties, and they were early out of the gate on reality TV too, with Evangelical families sharing their stories on shows like The Preachers of Los Angeles, Rich in Faith, the Duggar Family’s 19 and Counting, and Duck Dynasty. In this context, Cassie Randolph’s decision to appear on the faith-based reality television show Young Once, a series documenting a countercultural college experience void of booze and sex (she attended a Bible college in California), is practically normcore even given her leap to the Bachelor franchise.

But what is new is the amount of sex that now comes along with it. Less than 45 minutes into Matt James’ Bachelor season, one contestant met him wearing nothing but lingerie, a setup seen as entirely reasonable, at least in terms of trying to make an impression among a sea of women on night one. What's more, within Christian circles, the trope of the "smokin' hot" pastor's wife has become so popular that it's now a meme.

The logic here, according to Duke Divinity’s Kate Bowler, goes something like this: the most obvious evidence that God is good should be your family, especially the happy, satisfied wife. Men are to be rugged and muscled, while women are alluring and demonstrably pleasing partners. As Du Mez puts it, that “God gave men testosterone so they can be tough and able protectors of the church and home.” Most of the Bachelor’s Christian guys, Matt James included, are former football players, perfectly fitting that mold.

“The main thing is that God uses everyone — even the participants on a reality television show.”

Many fans tune in precisely because of these values. “For viewers worried about divorce, secularization, and gender fluidity, the Bachelor is a welcome relief,” says Bowler. The show’s fanbase, according to consumer data, draws heavily from the Midwest and Bible Belt with hotspots in small towns like Jonesboro, Arkansas, and Meridian, Mississippi. “When you look at the history of the show, it has always catered to a very specific audience that is very invested in a sort of all-American, middle-America approach, and they go where the ratings and money are,” says Taylor Nolan, who first appeared on Nick Viall’s Bachelor season.

By embracing Christianity, the show has confronted and in some cases subverted some of the most pervasive myths about sex and faith. When Luke Parker, a self-described “born-again virgin” who served as the villain of Hannah Brown’s Bachelorette season, issued an ultimatum that Brown, also a devout Christian, not have sex with anyone else lest he leave, she sent him home while uttering an instantly iconic line for the franchise: “I have had sex… and Jesus still loves me.”

Then there's Kristian Haggerty, best known in Bachelor Nation for being part of the franchise’s first same-sex rose ceremony on Bachelor in Paradise. Haggerty, an ordained minister, identifies as a “Jesus follower” on Instagram, and when we connect via Zoom, she's wearing a blue t-shirt referencing the Bible passage John 3:16.

Haggerty doesn’t believe being on Paradise or The Bachelor is at odds with Christianity. In fact, her faith contributed to her connecting more deeply with the Paradise cast. While you might assume contestants do nothing more than drink margaritas and make out with potential love interests on the Paradise beach, Haggerty recalled a different scene. She, along with Adams, Miller-Keyes, and Angela Amezcua, prayed together, shared insights from devotionals, and listened to Christian music.

She’s fully aware, however, that many Bachelor Nation fans think she’s at odds with God for her sexuality and have written to her saying as much. She admits the criticism stung, at one point shaking her faith, but she also understands what her visibility can mean to people who feel forced to choose between their sexuality and their faith, and it's this tack that she takes when I ask why she thinks so many Christians end up on The Bachelor or The Bachelorette. “It’s really personal for everyone,” she says. “The main thing is that God uses everyone — even the participants on a reality television show.”