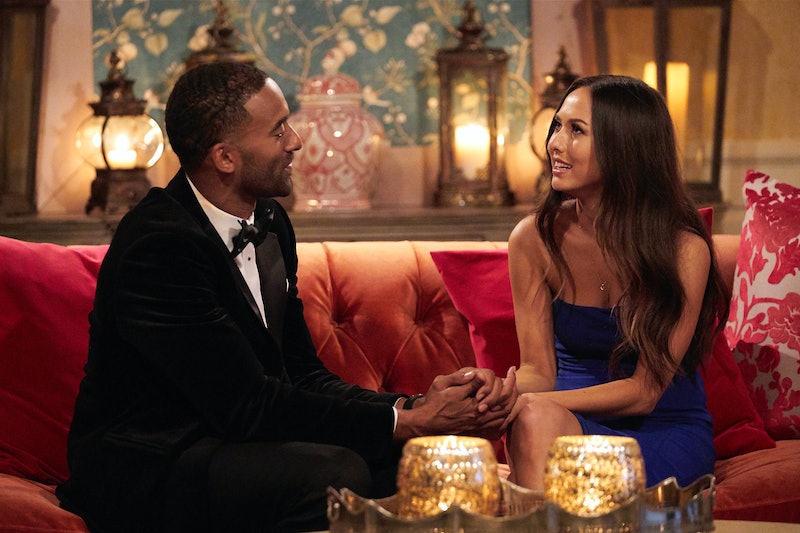 While she doesn't usually talk about it on a first date, Abigail Heringer's openness about her hearing loss on The Bachelor quickly made her a fan favorite — and earned her Matt James' first impression rose. During a recent appearance on the Bachelor Happy Hour podcast, Abigail opened up about her decision to tell Matt about her hearing loss on night one, explaining that she decided to bring her "hidden disability" to the forefront in an attempt to be open and vulnerable.

"I knew going into it that night that I wanted to talk about it just because, just going back to what my dating has been like, it's something that I normally don't say on a first date," she told hosts Becca Kufrin and Rachel Lindsay, explaining that her love life was "nonexistent" before appearing on the show. "You know, it is a huge part of who I am. But just kind of being a hidden disability, and you can't really see my cochlear implant when I wear my hair down, it is kind of a scary thing just to bring up to somebody on a first date 'cause you really don't know how they're going to take it."

Still, Abigail was definitely a little "worried" about speaking to Matt about her disability. "When you're trying to be attracted to a guy, airing your insecurities is not always the first thing that you want to do," the 25-year-old financial manager explained. "But just going into this whole process, I was like, 'You know what? I'm going to go all out. I'm just going to lay it all out there and, you know, just see how he takes it: Is it something that he wants to learn more about? Is it something that he wants to see what a relationship with a deaf person would be like?'"

Thankfully, once Matt was announced as the show's lead, Abigail knew that she would be comfortable opening up to him. "I think there's just something about Matt that just comes across very genuine," she told BHH. "You know, I've heard him speak a few times. And just how compassionate he is, I knew that he was going to be able to challenge me to have those conversations."

Abigail — who is the franchise's first hearing-impaired contestant — explained during a conversation with Matt that she looks up to her older sister, who was also born deaf, about being upfront about her disability. "She kind of paved the way [for me]," she explained at the time. "So, I just kind of, like, followed in her footsteps."

It was that vulnerability that earned her the first impression rose (and a kiss) from Matt. "It was something that I'd been so insecure about," Abigail said. "And so to open up about it and to not only have him acknowledge it but to actually see it as a really attractive quality, it was just a really special moment, for sure."

In an interview with E! News, Matt explained that he was won over by Abigail's "authenticity" and willingness to open up with him. "She's incredible," the Bachelor said. "She went above and beyond what I was hoping I would experience that first night ... I'm looking for something real, and I felt it [with her]. I wanted her to know that I appreciated her and her candidness and her willingness to be like that, so it was a no-brainer for me."