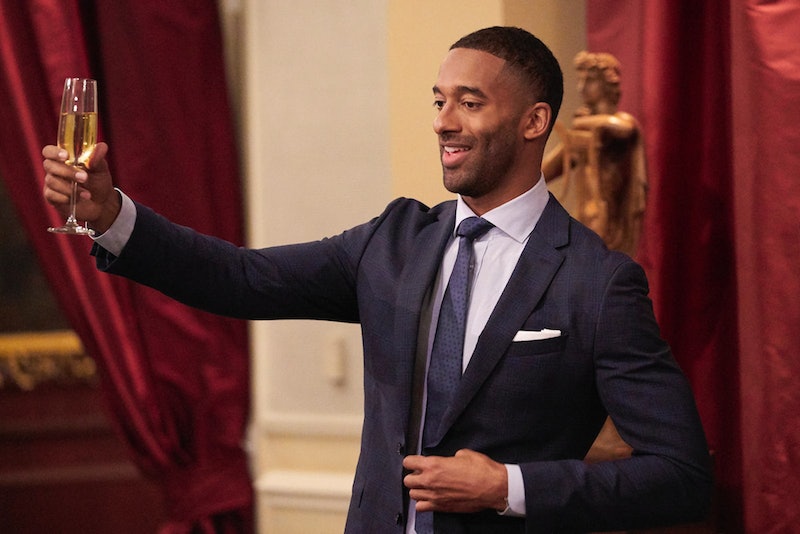 There are plenty of reasons why the current season of The Bachelor is worth talking about, but for most fans, the biggest topic of conversation is the lead's ... unusual kissing style. After weeks of jokes and memes about it, Matt James addressed his habit of kissing with his eyes open during an appearance on the ACC Network's In Play.

"I guess I didn't realize I kiss with my eyes open until people were videotaping me kiss people, and I'm watching it back. I'm like, 'Yo, what are you doing?'" he said. "It was just as uncomfortable for me to watch as everybody else," Matt continued, adding that he's been getting an influx of messages from friends and fans telling him to close his eyes during those intimate moments.

Unfortunately, though, there's not much that the Bachelor can do about it now. "There's gonna be a lot of this because this has already been filmed," he explained. "I apologize to fans, but maybe I need to start wearing shades? If I were to do this again, I'd probably have an eye patch or something. It's a learning experience."

It's a good thing that Matt has such a good sense of humor because Bachelor Nation hasn't held back from teasing him on social media. On Jan. 12, his best friend and Bachelorette fan-favorite Tyler Cameron retweeted a screenshot of Matt kissing Lauren during a group date with his eyes wide open. "ayyyyoooo @mattjames919 what we got going on over here," Tyler wrote alongside several laughing emojis. The Bachelor took it in stride and joked that he was looking out for his women: "Gotta make sure no one sneaking up on us! When your eyes are closed.. ANYTHING can happen! It's for both of our protection."

Around the same time, Entertainment Tonight correspondent (and Chris Harrison's girlfriend) Lauren Zima also poked fun at Matt's technique while promoting her recap show, Roses and Rosé. "If you babes are ready to WATCH the new episode of #RosesAndRosé is up! you can SEE the link in my stories, just ... OPEN YOUR EYES," she wrote, along with plenty of side-eye emojis to punctuate her jokes.

On Jan. 26, Wells Adams — who appeared on The Bachelor to referee Matt's boxing date — also teased the former football player on Instagram. "Matt kissed me after this picture was taken, and yes...his eyes were open," Wells wrote alongside a photo of himself with Matt and Chris in the ring before the group date. In response, Matt shared plenty of laughing emojis in the comments before asserting that Wells was sharing a "true story."

Even the Bachelor himself got in on the memes, sharing a close-up photo of his wide eyes on Twitter. You know, to give all of the women who haven't made out with him on the show the full Matt James experience. "*Literally any kiss POV*" he captioned the post. Well, at least he's embracing it.