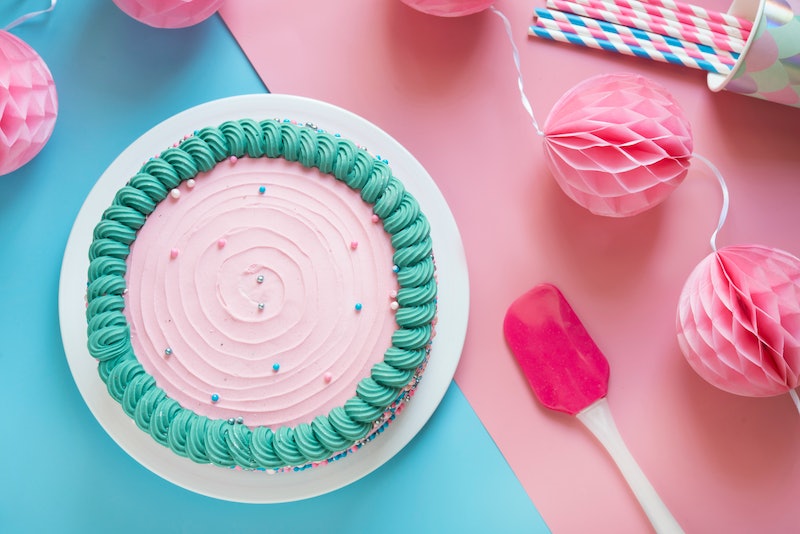 The internet's newest obsession is cake, and while that sounds great, the reality isn't as delicious as some might have hoped. The cake meme craze has taken over, sparking fandoms everywhere to create pop culture cake memes that will have you questioning reality. For anyone unfamiliar with this meme's origin story, the jokes began after Turkish food artist Tuba Geckil's hyper-realistic cakes, which are in the shape of everyday inanimate objects, including a Croc, apple, potted plant, roll of toilet paper, and more, went viral over the weekend. Geckil's work made quite an impression, sending people everywhere into an existential crisis, questioning everything, wondering if it all could cake.

On July 8, Tasty shared a compilation of Geckil's cakes on Twitter, with the simple caption: "These Are All Cakes." The video — which features a knife slicing into a croc, a bar of soap, a pizza, and more, only to discover that they are, in fact, cake — inspired some to question reality. Was the Earth really just a big ball of cake? Is a shoe really an elaborately decorated dessert?

This week, many Twitter users fell down the cake-related rabbit hole, and no cultural moment or event seems to be off-limits. Moses parting the Red Sea? Well, turns out the ocean was cake on the inside. Edward Cullen? That vampire is cake, baby. Every notable TV death? Just a test to see if the characters were a cake. Basically, nothing is off-limits to this strange, strange meme.

The nihilistic belief that anything or anyone could be cake is still sweeping the internet, but here are the best pop culture-inspired cake memes so far.

What if Edward Cullen's sparkles were actually sprinkles?

There's only one person who can help Bachelorette alum Dylan Barbour figure out if he is, in fact, cake, and that's his fiancée Hannah Godwin.

What if Dawn wasn't the key after all, but just deliciously frosted cake?

He was just kidding!

Now, this was the real mystery in Knives Out — or, as Detective Blanc might say, the real donut hole.

Okay, hear this one out: Peeta Mellark was the baker's son.

Call her: "Daenerys Stormborn of House of Targaryen, the First of Her Name, Queen of the Andals and the First Men, Protector of the Seven Kingdoms, the Mother of Dragons, the Khaleesi of the Great Grass Sea, Not A Cake."

The question Brandon Flowers was too afraid to ask.

Even the dogs are not immune to asking life's great questions.

The ultimate twist in Parasite wasn't — spoiler alert — the man living in the basement, but the cake.

For all these years, we thought that Anakin became Darth Vader after he massacred a room of children, but maybe he just really, really needed something sweet.

This one's pretty understandable, as many would describe Ryan Reynolds as "a snack."

The Oscar-nominated drama about a marriage falling apart could have been very different.

Never underestimate Twitter user's ability to take a meme as far as possible, and no corner of the pop culture universe was off-limits to these meme-makers. The real question is: are these memes truly strange, or just logical reaction to the reality that cakes could be hiding in plain sight?

More like this
Netflix Shut Down 'Bridgerton' S3 Rumours About A “Very Dark” Storyline
By Bustle
Anne Hathaway Shared A "Thrilling" 'Princess Diaries 3' Update
By Darshita Goyal
The 'Scream 6' Trailer Shows Off Hayden Panettiere's Return & Ghostface In NYC
By Jack Irvin and Jake Viswanath
'The Queen’s Gambit' Season 2 Tweet Wasn’t From Anya Taylor-Joy
By Mary Kate McGrath, Jack Irvin and Grace Wehniainen
Get Even More From Bustle — Sign Up For The Newsletter
From hair trends to relationship advice, our daily newsletter has everything you need to sound like a person who’s on TikTok, even if you aren’t.