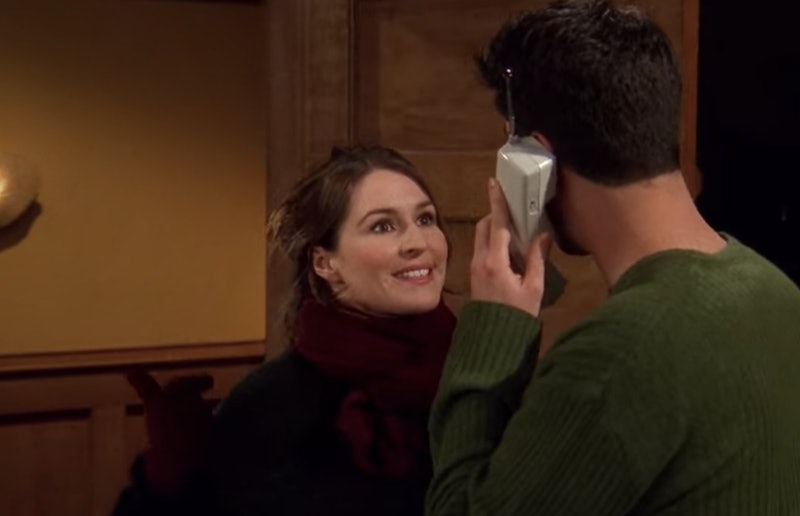 Emily Waltham from Friends has got a bad rap over the years; her character has often been blamed for keeping Ross and Rachel apart, especially when she asked Ross to no longer be friends with Rachel so they could continue their marriage. But while her character was at times problematic, she also had some brilliant (and very British) one-liners. Emily – who was played by Helen Baxendale – and her excellent British-isms are enough to make any GB resident chuckle, especially when you watch her in contrast to her American counterparts. Here are some of her funniest, most British quotes from her time on the show.

“That’s not rude, it’s perfectly in keeping with a trip where I’ve been run down by one of your weiner carts.”

One of Emily’s first lines upon meeting Rachel and thinking she’s been stood up on their friend date, this is delivered in the most crisp British accent for maximum impact.

“Apparently to you people I look like someone who has a balloon full of cocaine stuffed up their bum.”

Another quote from her introduction, Emily experienced a hard time at JFK airport, and described it in true British fashion.

“Ross. Come look. There's a deer just outside eating fruit from the orchard...”

Emily’s excitement over the cute deer she sees at the hotel in Vermont is *very* Countryfile. Tell me I’m wrong.

“I can’t believe you really walk alone here at night, I mean, you hear such stories about New York.”

Being a British person visiting the mean streets of New York, we’re always a little cautious...

“That big bloke with the beard, he’s got a trick hip.”

While trying to give Ross tips to win his rugby game, Emily uses some great slang and makes us feel right at home.

Now, us Brits are nothing if not polite, so it makes sense that her response to Ross saying he loved her for the first time at the airport was a simple thank you.

“Oh blimey, I still can’t believe you’ve got an earring.”

Anybody that says “blimey,” is automatically British in my eyes. End of.

After Emily drops the “M” bomb (marriage), she tries to back track and asks Ross in what I can only assume is an attempt at American slang “don’t go freaky on me.” Bless her. She tried.

“The caterer rang to say it’s going to be chicken kiev instead of chicken tarragon. Then the florist said there are no tulips. And the cellist has carpal tunnel syndrome...”

Back in London, everything seems to be going wrong in the lead up to Emily and Ross’s wedding, and everything about this sounds just so painfully British.

“Well up yours too.”

In response to Ross giving a ‘time out’ signal with his hands, Emily misunderstands and delivers this classic zinger.

“It really is the most lovely building you’ll ever see.”

This is as Emily describes the building she marries Ross in, and it couldn’t sound more proper and British in any way!

“Ross, take me off speaker phone.”

When Emily learns Rachel and Ross are hanging out, she demands to speak to Ross privately. Us Brits don’t like to air our dirty laundry in public. Ohhh no, siree.

More like this
6 'Happy Valley' Easter Eggs You May Have Missed
By Sophie McEvoy
Claire Foy Spoke Out About 'The Crown's Gender Pay Gap
By Sam Ramsden
'Bridgerton' S3 Will Show A *Very* Different Side To Kanthony
By Sam Ramsden
Twitter Is Burning As Phoebe Dynevor Reveals Daphne’s 'Bridgerton' Exit
By Sophie McEvoy
Get The Very Best Of Bustle/UK
Sign up for Bustle UK's twice-weekly newsletter, featuring the latest must-watch TV, moving personal stories, and expert advice on the hottest viral buys.