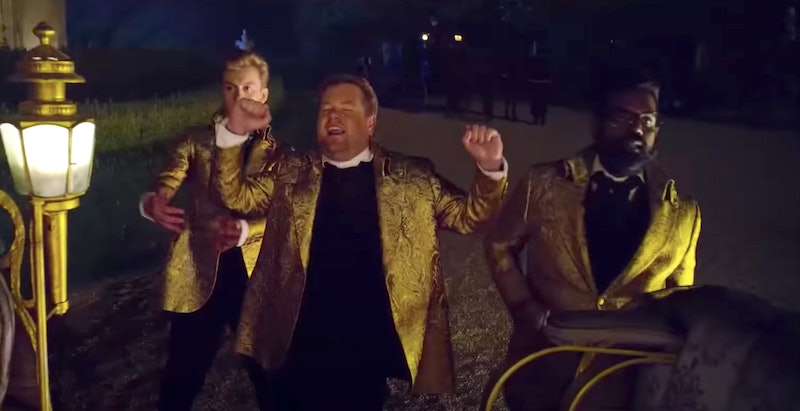 With Camilla Cabello as a business-savvy Cinderella, Idina Menzel as the evil but very glamorous stepmother, and thee Billy Porter as the fairy godmother, Amazon Video’s upcoming Cinderella movie has all the makings of a modern-day fairytale hit. The all-singing and dancing trailer dropped this week, and the celebrity cast members were plenty (spot a silver-haired Pierce Brosnan as the King). Movie fans were quick to notice the fact that late-night host James Corden is among the celebrity cast and it’s safe to say they had some, um, feelings about his involvement in yet another movie musical franchise...

Airing September 3, 2021, Cinderella will see The Late Late Host and former Gavin & Stacey star play one of the three mice who befriends and assists the future princess through her rags-to-riches storyline. While I’m inclined towards the “don’t hate the actor, hate the game” school of thought, I can see Twitter’s point. Corden has appeared in a lot of musicals at this point, including Prom, Into the Woods, both of the Trolls movies, and not to mention Cats, which none of us will be forgetting in a hurry. Alongside that, he’s also appeared in Ocean’s 8 and hosted the Emmy’s (twice), the Grammy’s (twice), and even the Friends reunion. In others words, it really is James Corden’s world, and we’re all just living in it.

While it’s worth noting that James Corden came up with the idea of Cinderella remake, and also executive produced the new film, that didn’t stop Twitter from expressing itself through the art of some seriously funny memes...

The Hardest Working Agent In Showbiz...

... And The Fastest Moving, Too