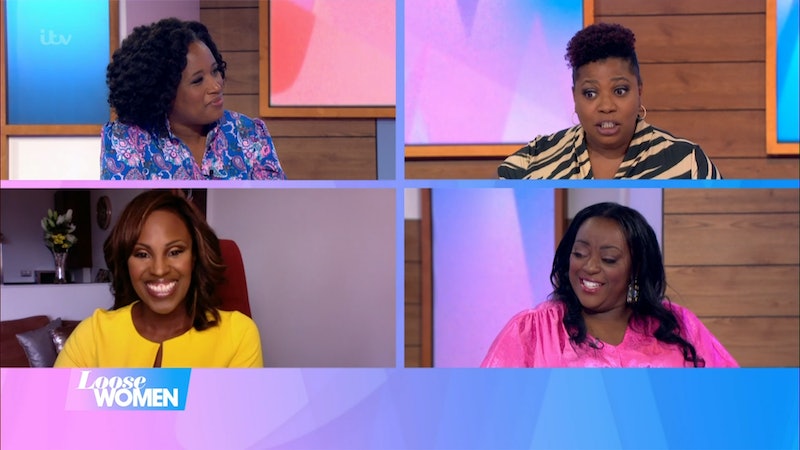 Working from home received a much-needed boost this October as ITV's Loose Women made history with its first all-Black panel. Broadcaster Charlene White, comedian Judi Love, and singers Kéllé Bryant and Brenda Edwards were praised for the "refreshing" episode on Oct.22, which was full of reggae music, discussion, and laughter. Fans of the programme rushed to social media to congratulate Loose Women for the landmark episode and we've compiled a list of the best Twitter reactions to Loose Women's first black panel.

The lively panellists talked about a range of topics on Thursday from parenting to representation, and showed off their “sexy dancing” during the episode. Doreen Lawrence was also welcomed to the programme to talk about her experiences in the 27 years since her son Stephen Lawrence was murdered.

Brenda Edwards finished the show with a belting performance of Whitney Houston’s Greatest Love Of All moving much of the cast to tears. Charlene White, a newsreader for ITV News, admitted she shed a few tears once the cameras stopped rolling. Loose Women, which has been broadcast on ITV for 21 years, shared a Tweet marking the moment, writing “No… YOU'RE crying.”

While there was some backlash online, many people responded positively to Loose Women's decision, with some saying they hope to see much of the ladies outside of Black History Month.

The broadcaster took a moment to thank all the past and presenter black broadcasters who have paved the way for this landmark moment to happen.

Black viewers took to Twitter to thank the broadcaster for making this moment happen. "My heart could burst today," one wrote. Viewers also said they hoped this would mark the the beginning of similar trends after Black History Month.

The comedian discussed why representation matters and moved viewers to tears.

... Especially after Love's story about her dad's sexy dancing. "I was absolutely roaring with laughter at your antics," said one viewer.

Some remarked that we shouldn't be shocked to see four black women host a mainstream show, yet the panel proved why representation matters on television.

The Power Of Doreen Lawrence

Doreen Laurence spoke about her son Stephen Lawrence's legacy more than two decades after he was murdered in a racially motivated attack. "It felt like a moment of powerful, positive change," said a viewer.

"I Didn't Even Know I Needed This"

More than anything, people were revelling in the joy of seeing the panel in action and Black viewers expressed how much the moment meant to them.

More like this
Jason Derulo Is Launching A New Singing Show In The UK
By Maxine Harrison
'I'm A Celebrity' Just Made A *Major* Announcement
By Sam Ramsden
After The Bling Ring, Nick Prugo Was Embroiled In Another Scandal
By Arya Roshanian
The Bling Ring's Alexis Neiers Has Come A Long Way Since Her 'Pretty Wild' Days
By Sophie McEvoy and Arya Roshanian
Get The Very Best Of Bustle/UK